The Bank of England meets this week for its March Interest Rate Decision meeting.  At the meeting in February, the BOE left rates unchanged at a record low 0.1% and the bond-purchasing program unchanged at 875 billion Pounds. “Get ready for negative rates, but that doesn’t mean we will use them” was the main takeaway from the last meeting. However, since then,  rising interest rate yields and rising inflation expectations have subdued the “negative rates” talk, for now.  This will be the test for Bailey at this meeting.   Will Central Bank Governor Bailey be able to continue to convey the message he sent last week, that the BOE is cautiously optimistic amid vaccine roll-outs and continued fiscal stimulus (i.e. furlough program)?  Or will he follow the lead of chief BOE economist Haldane, who implied that central banks are becoming too complacent among rising yields? This would force Bailey to  provide a less dovish statement and try to talk down interest rates. Markets are currently pricing in a hike by the end of the year!

Learn everything you needed to know about the BOE


On the other side of the coin is the FOMC meeting this week.  Fed Chairman Powell has been outspoken regarding his stance of Monetary Policy.  Inflation expectations are transitory and the recent rise in interest rates is unsustainable.  As a result, expect interest rates to remain unchanged and bond buying to remain at its current pace of $120 billion per month.  There is speculation on the Fed’s part that because of the recent passage of President Joe Biden’s $1.9 trillion stimulus package, inflation may lie ahead (the bond market has been saying this for a month!).  This may result in some FOMC members to move up their timing of their inflation forecasts. But for now, Powell is seen as “holding the line” regarding monetary policy.  In addition, the vaccine roll-out is continuing, with over 3 million shots given on Saturday alone! This will increase optimism of the recovery (which the Fed says is the reason for the increase in interest rates!).  See Matt Weller’s complete FOMC preview.

GBP/USD has been in an orderly, upward sloping channel since September 2020.  After briefly breaking out above the top trendline in late February, price failed to convincingly take out the 1.4200 level and formed a shooting star.  Price pulled back into the channel and has had trouble taping out the 1.4000 psychological resistance level.

On a shorter, 240-minute timeframe, one can get a closer view of the price action since pulling back from 1.4200. GBP/USD was in a shorter-term, tighter, upward sloping channel prior to the 1.4200 level.  After pulling back, the pair moved lower through that channel to the 61.8% Fibonacci retracement level from the February 4th lows to the February 24th highs, near 1.3836.  Price appears to be currently trying to form the right shoulder of an inverse head and shoulders pattern.  If confirmed by a break of the neckline, the target for this pattern is the distance from the neckline to the head, added to the breakout point, which in this case is near the recent February 23rd highs of 1.4240.  However, GBP/USD must first get through the psychological resistance at 1.4000.  Support is back at the recent lows near 1.3754.  If price breaks below, the inverted head and shoulders pattern would be invalidated.  Next support is at the February 4th lows near 1.3566. 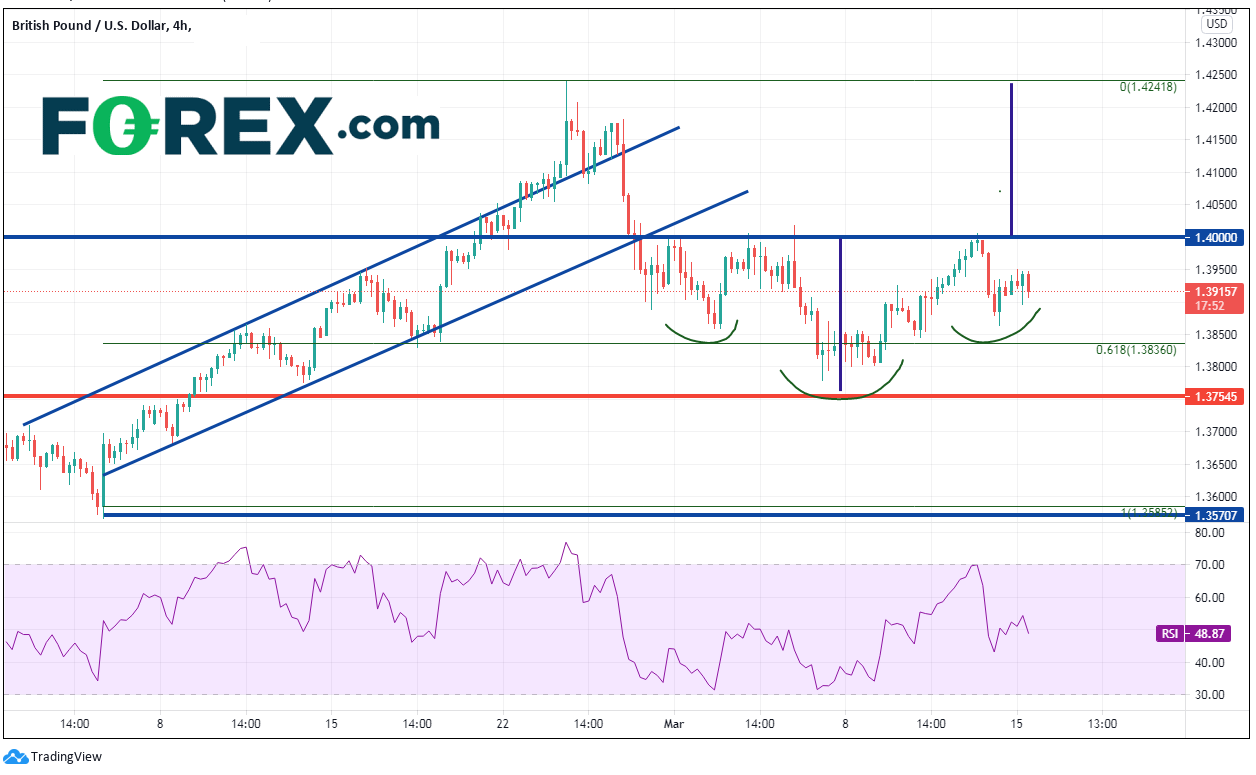 The price action for GBP/USD this week is going to depend on the outcomes of both the FOMC meeting on Wednesday and the BOE meeting on Thursday.  The less dovish central bank should see their respective currency move higher!