Currency pair of the week: USD/MXN

During the first few weeks of Joe Biden’s Presidency, he has put pen to paper signing executive orders on everything from immigration to climate change to wearing masks.  However, as mentioned in the Week Ahead, the main focus in his early days has been on his $1.9 stimulus package making it way through congress.  Last week, an important procedural motion was passed, which allow for the text and legislation of the plan to be drafted up.  Hopes for Democrats are that the plan, in its totality, will be passed by the end of month.  However, the US Dollar was well bid through Thursday last week, prompting speculation that inflation expectations may be in the forefront of many traders’ minds.  10-year yields also made new pandemic highs.  The  US Fed is in “wait and see” mode to gather evidence of how the stimulus package will affect he economy.  Although some Fed officials have acknowledged there may be a rise in near term inflation expectations, they also said that the path of the on the economy is still uncertain and will be highly dependent on the spread of the coronavirus and the vaccine rollout.  Excluding employment, US data has been strong as of late.

Mexico has been ravaged by the coronavirus, and it continues.  Response to the situation has been slow and chaotic.  January was Mexico’s deadliest month thus far, with almost 33,000 fatalities.  The country has moved into 3rd place in terms of number of deaths, behind the US and Brazil.  The vaccine rollout has been just as slow and chaotic as Pfizer has had to cut back on promised deliveries due to global demand.  The Bank of Mexico, Banxico, will meet on Thursday, to discuss interest rate policy.  The central bank left rates unchanged in December at 4.25% for the second time after a year and a half of rate cuts.  Expectations are mixed on whether the central bank will leave rates unchanged or cut by another 25bps.  The MoM inflation rate increased to 0.38 in December from 0.08 prior.  However, after stabilizing above 4% in the summer, annual inflation has been falling in the autumn to 3.15% in December.  January’s inflation rate will be released on Tuesday.  Recent reports of the unemployment rate (3.8%), retails sales (3.3%) and Q4 GBP (3.1%) were all stronger than expected.

USD/MXN has been trading in a descending wedge since the pandemic highs in April 2020. The pair has been oscillating around the 50 Day Moving throughout the move, however, it held early December 2019 lows near 19.50.  The pair is currently consolidating near the top of the descending wedge and is threatening to breakout. 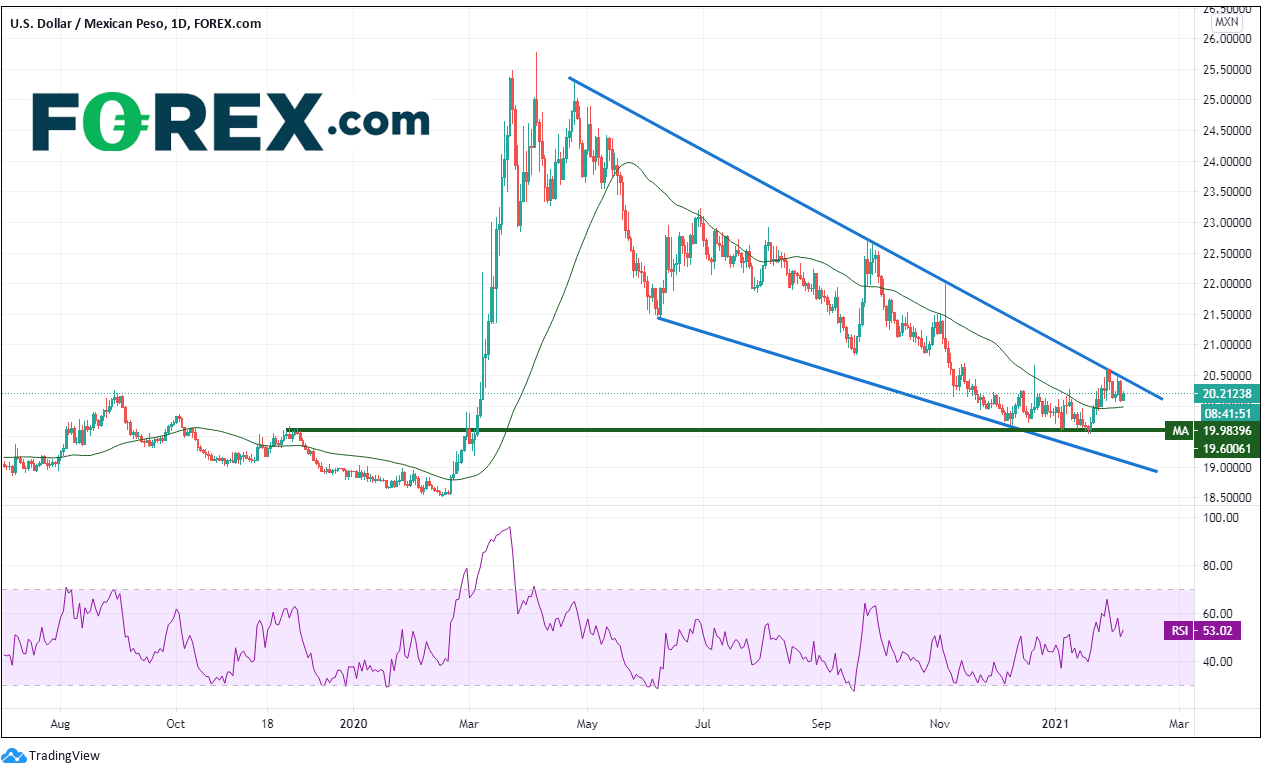 On a 240-minute timeframe, USD/MXN has broken out of a shorter-term descending wedge beginning on December 21st, 2020.  After breaking out on January 21st, price moved to the top downward sloping trendline near 20.60, before pulling back to the 50% retracement level from the December 21st lows to the January 21st highs, near 20.05.  USD/MXN appears to be forming a flag pattern with the top of the flag and first resistance near 20.40.  If price breaks above the flag, the next resistance is the January 21st highs near 20.60.  The target for a flag pattern is the length of the flagpole added to the breakout point, which is near 21.06.  Support below is near the previous lows and the 50% retracement of the previously mentioned timeframe near 20.05, and then the 61.8% Fibonacci retracement of that same timeframe near 19.93. 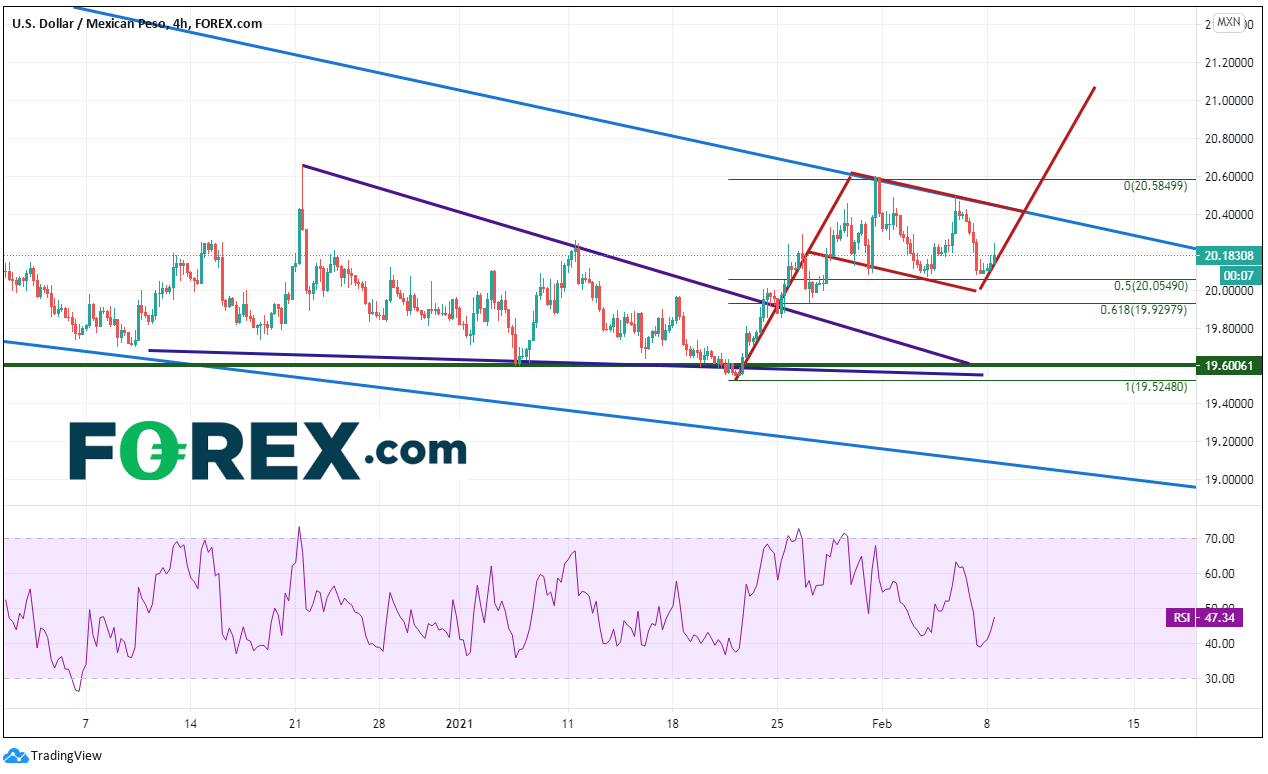 The Bank of Mexico meets this week and there is the possibility that they may cut rates from 4.25% to 4.00%.  The price pattern on USD/MXN appears to be forming a flag pattern.  Watch to see of price can break out of the flag this week, which will target just above 21.00.