Currency pair of the week: AUD/USD

All eyes will be on US CPI, undoubtedly the week's most important macro release on Wednesday.

The US dollar has started the new week giving back some of its post-NFP gains, especially against the Australian dollar, which has been boosted by improving risk appetite after China’s latest exports data beat expectations.  What’s more, oil prices have weakened again, and this is providing drag on bond yields, which is supporting the likes of silver, bitcoin, Swiss franc and Japanese yen – currencies and commodities that carry very low or zero yield. The macro calendar is quiet this week with US inflation data in mid-week being the main highlight. This will keep the dollar pairs in focus after a very strong US jobs report on Friday rekindled the possibility of a hattrick of 75 basis point rate hikes in September. But with around 1 and a half months to go until the next FOMC meeting, we will have one more job report, two more CPI reports and plenty of other important data in between that could dramatically change the outlook by the time of the Fed rate setters’ September 21 meeting.

How hot was US inflation in July?

US CPI will undoubtedly be the most important macro release on Wednesday. Inflation might have already come down more than expected in July, which may be another reason why the dollar longs/bulls are refusing to keep the currency bid.

There are reasons why inflation will slow going forward. We saw the ISM PMI reports reveal sharp slowdown in prices paid sub-indices. Global supply chain pressures have eased. Shipping costs have fallen. Crude and other commodity prices have dropped. Consumers’ buying power have been squeezed, which should be disinflationary. Elon Musk has said the global economy has gone “past peak inflation,” with his electric car company’s commodity and component costs trending downward. Clearly, it will be some time before these changes filter through the economy and show up in data.

So, now that the dust has settled from Friday’s strong jobs report, we are seeing renewed weakness in US dollar and bond yields as forward-looking markets anticipate a sharper slowdown in US rate hikes, perhaps after the September meeting.

Also important to watch this week will be Friday’s release of the University of Michigan’s closely-followed Consumer Sentiment and Inflation Expectations surveys. Thanks to soaring prices of everything from gas to food, consumer sentiment in the US has been dropping rapidly in recent months, mirroring the situation in Europe and the rest of the world. However, the US economy has weathered the inflation storm better than other regions, which is why the dollar has been so strong. But is the momentum changing?

The AUD/USD has made back the losses from Friday, which is a sign of a bullish reversal on its own. But more to the point, it has also held the breakout above the bearish trend line and support around 0.6875. From here, a re-test of the 0.70 handle looks very likely. Potentially, we could see the Aussie go for a test of the 200-day average around 0.7150, which also happens to be the base of the breakdown in June. 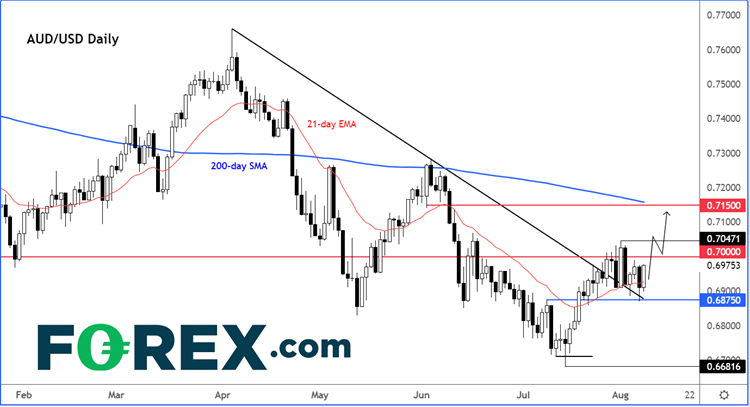 This bullish outlook will be invalidated if support at 0.6875 breaks on a daily closing basis.