DAX could benefit from EUR/USD weakness ahead of German elections

Unless we see a shock outcome in the German elections on Sunday, the DAX looks set to expand further to the upside in the short term outlook.

Germans will go to the polls this Sunday and Chancellor Angela Merkel is widely expected to win her fourth term in power. Her CDU party is not likely to win an outright majority. Since the Second World War German governments have tended to be coalitions. The latest polls put her CDU party at 28%, with the opposition Social Democrats at 23%. Although polls can and have been wrong, we don't think this will be the case as far as the German elections are concerned. Thus, we don't anticipate there to be a shock outcome. The only issue as far as we are concerned is which party or parties would CDU chose to form a coalition with.

So, unless we see a shock outcome in the German elections on Sunday, the benchmark stock index, DAX, looks set to expand further to the upside in the short term outlook. Indeed, investors' appetite for risk remains high as evidenced, for example, by US indices repeatedly hitting new all-time highs despite the Fed tightening monetary conditions there. In Europe, too, the stock markets have been, on the whole, firm. Admittedly, the DAX has underperformed, not just her US counterparts but some European indices, too. This has been in part due to the large number of export-oriented stocks that make up the index, which have been undermined by a rising euro. But the single currency has started to fall back against the pound, and may now ease against the dollar too given the Fed’s desire to tighten monetary conditions further in the US despite recent slowdown in activity in the world’s largest economy. If the EUR/USD exchange rate does depreciate then this could benefit the DAX significantly.

For now, though, the focus will be on the German elections. A market friendly outcome could potentially inspire a rally to a new all-time high. After all, the price structure looks quite bullish on the DAX. After creating a false break reversal pattern beneath 11940 key support, the DAX has taken out several resistance levels and broken back above its key moving averages. Consequently, the faster 21-day exponential moving average has crossed above the 50-day average, which in turn sits above the still-rising 200-day moving average. The direction and slope of these moving averages objectively tell us that the trend is bullish as things stand. Indeed, this week’s earlier consolidation after the upsurge suggests the buyers are probably not done just yet. If the DAX breaks and holds above the next resistance at 12620 then we may see an eventual move towards – and possibly beyond – the previous all-time high at 12951/2. A couple of short-term support levels to watch are at 12590, 12520 and then there’s nothing significant until 12390, which was the high in 2015. 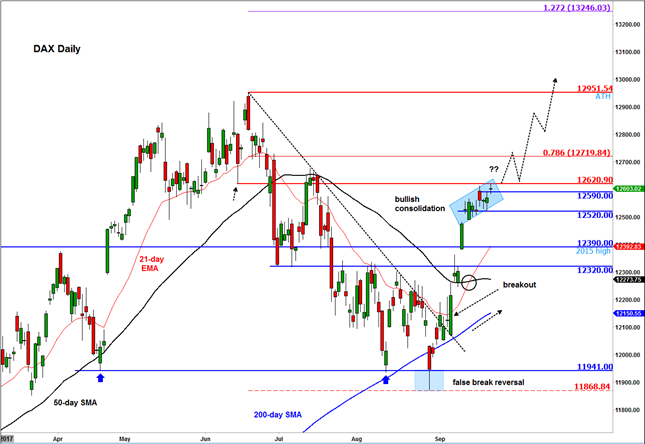