Germany’s DAX index broke down late last week below a major support level at 9300. That breakdown was especially significant because the 9300 level had previously held up effectively for more than 14 months – most recently in August, September, and then three weeks ago in late January.

Prior to that key support breakdown, Germany’s benchmark equity index had been falling in an increasingly bearish trend from the 11400-area highs back in the beginning of December. Last week’s breakdown below 9300 confirms a continuation of the medium-term downtrend from last April’s highs.

Contributing to the DAX’s woes have been a number of crucial factors, including consistently depressed crude oil prices along with slowing economic growth and financial market turmoil in China. To add onto this, the European banking sector has suffered major setbacks recently, and German industrial production was shown on Tuesday to have fallen by 1.2%, severely disappointing consensus expectations of a 0.2% increase.

These factors have helped to pressure the DAX below 8800 at one point this week, a level that has not been seen since late 2014. Having already hit its initial downside target at the 8900 support objective, the index could well have significantly further to fall in light of continuing global stock market volatility and pervasive economic growth concerns.

Technically, the DAX continues to display a bearish trend bias on both a short-term and medium-term basis. On any further extension of the current bearish momentum below the noted 8900 support, the next major downside target is at the key 8500 support objective, followed by the 8100 support level. 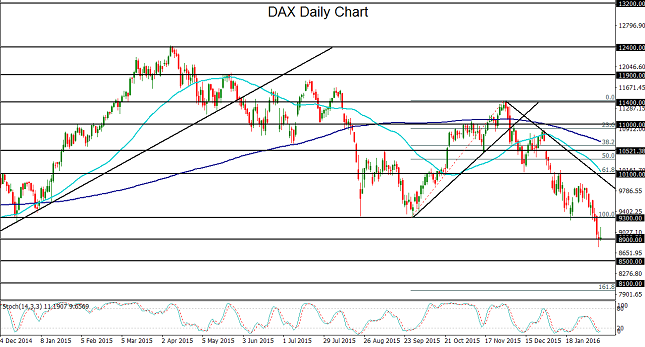