EUR/USD climbed 0.5% to 1.1310 yesterday, as indicators suggest that Eurozone’s economic activity is quickly recovering from coronavirus crisis. Research firm Markit reported that the bloc's Manufacturing PMI climbed to 46.9 in June from 39.4 in May and Services PMI rose to 47.3 from 30.5, both stronger than expected. The Composite PMI jumped to the highest level in 4 months at 47.5.

EUR/USD climbed 0.5% to 1.1310 yesterday, as indicators suggest that Eurozone’s economic activity is quickly recovering from coronavirus crisis. Research firm Markit reported that the bloc's Manufacturing PMI climbed to 46.9 in June from 39.4 in May and Services PMI rose to 47.3 from 30.5, both stronger than expected. The Composite PMI jumped to the highest level in 4 months at 47.5. 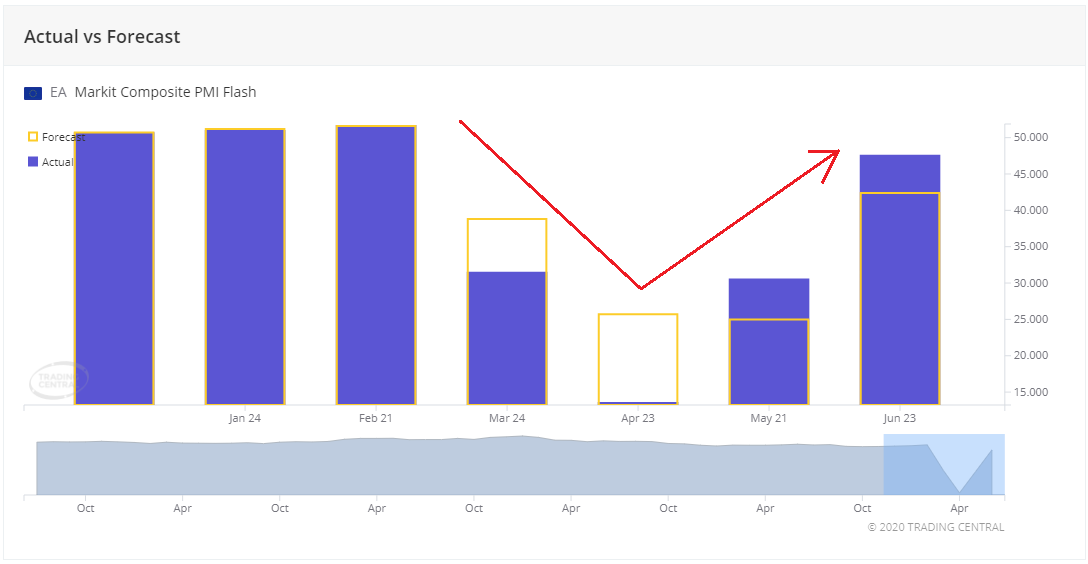 In fact, EUR/USD has bounced roughly 5% from May's low. The pair reached a 3-year low after the action by the European Central Bank to launch emergency purchase programme, but then showed resilience even as the ECB rolled out additional measures. Some investors are speculating that monetary easing is approaching an end and are already anticipating a reversal. 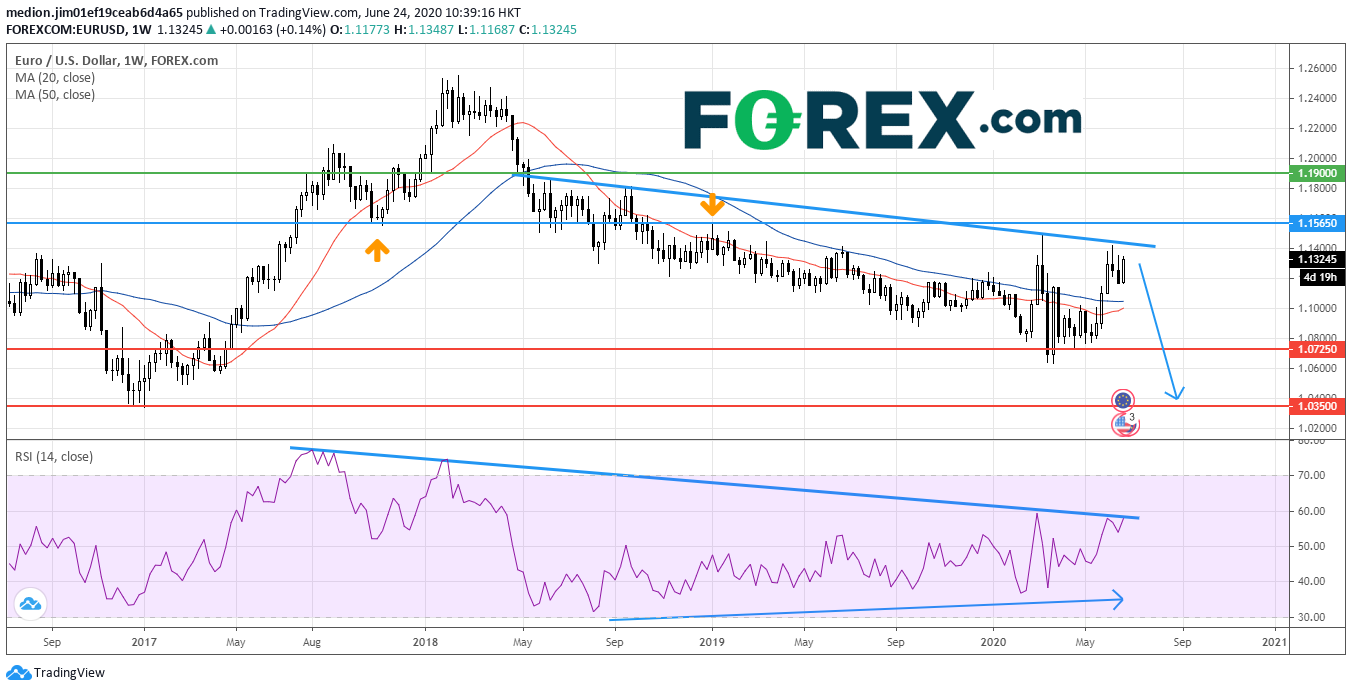 Currently, the pair is trading above both 20-week and 50-week moving averages. The RSI posted a bullish divergence signal, suggesting the loss of downward momentum for the prices.

As the technical configures are mixed, the technical outlook of EUR/USD would be neutral. As long as the overlapping resistance level at 1.1565 is not surpassed, the pair could consider a consolidation move to 1.07250. Only a break below this level would enhance the bearish outlook and trigger a drop to 1.0350 (the low of 2017).

On the other hand, only a break above 1.1565 would suggest a clear break of the declining trend line and would turn the outlook to bullish. The next resistance level would be located at 1.1900.


Similarly in the U.K., sentiment was lifted by upbeat economic data. The Markit U.K. Manufacturing PMI climbed to 50.1 in June, slightly above the critical 50 mark that separates expansion from contraction, and Services PMI rallied to 47.0 from 29.0 in May. 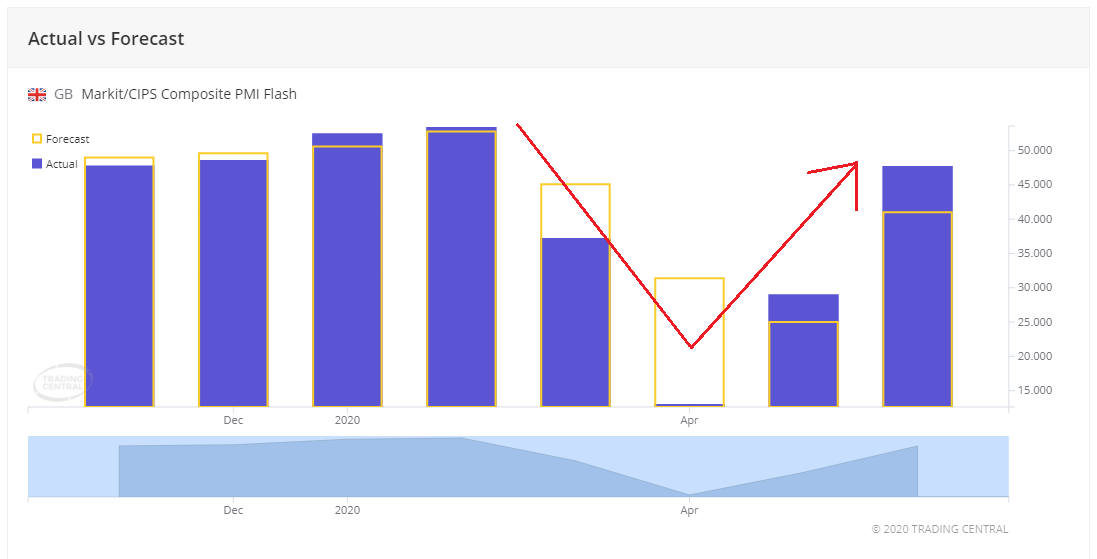 On a weekly chart, Although GBPUSD posted a sharp rebound from March low at 1.1410, it is still capped by a declining trend line drawn from December 2019. 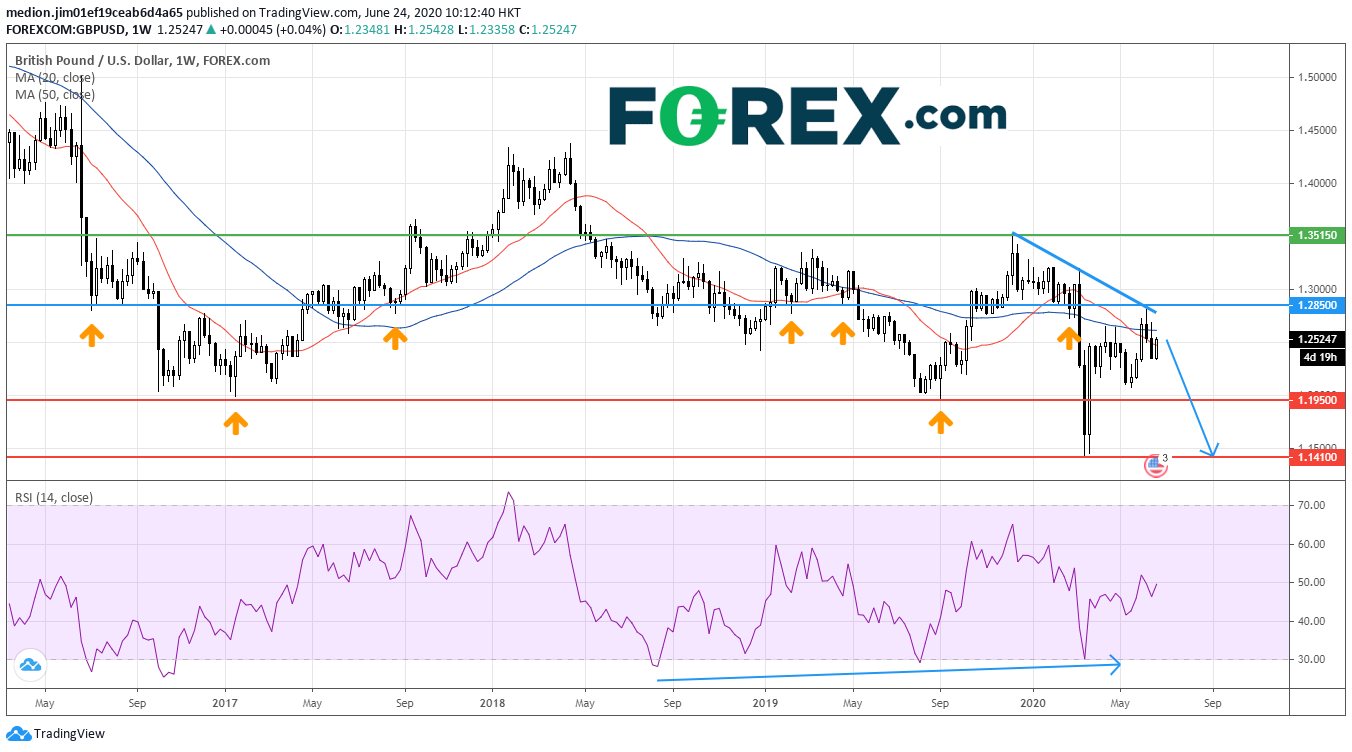 Currently, the pair is trading around both 20-week and 50-week moving averages. The RSI is around its neutrality level at 50 and indicates a bullish divergence signal. Both indicators suggest the lack of momentum for the pair.

In this case, as long as the overlapping resistance level at 1.2850 holds on the upside, the pair remains playing a range trading and should consider a consolidation move to 1.1950. Only a break below this level would bring a drop to March low at 1.1410.