The new week has started with a bang for the dollar. For the first time since December, the Dollar Index has moved above the psychologically-important 100 level.

The new week has started with a bang for the dollar. For the first time since December, the Dollar Index has moved above the psychologically-important 100 level. Investors had waited patiently for the US elections. Once it was over, they decided it was the right time to buy stocks and the dollar as they envisaged that under a more tamed Donald Trump, the government’s planned spending on infrastructure and tax cuts will stimulate economic growth and in turn inflation. But are investors right to think that way? Many point to the rally in the copper as evidence that it is indeed the impact of Trump boosting hopes that there will be stronger demand for industrial materials. However, it worth pointing out that base metals – copper in particular – had been rallying days before the US elections, unlike, for example, the dollar and stock markets. Copper’s rally may well have been due to other factors, including hopes that the Chinese demand was recovering or expectations of a tighter market, which appears more likely in my view, rather than stronger demand prospects from the US. For the same reason, I would be surprised to see the dollar rise significantly further from these levels, unless the Fed sends out the clearest signal yet that a December rate rise is on the cards.

In any case, the Dollar Index does appear to be a little bit overbought around these levels, though technically the trend looks strong as it resides inside a bullish channel and above the main moving averages. So, a short-term pullback would not come as a surprise to me, before we potentially see higher levels. That being said, the 100 level has now been tested several times since March 2015. The more a level is tested, the more likely it will break in the direction of the test. And with the long-term trend being bullish for the DXY, a decisive breakout could encourage those on the side-lines to come into play. It should be noted that if the dollar were to rise further then this will be bad news for US stock. Up until, they have been rising and falling in unison. This relationship cannot continue indefinitely as the appreciating dollar is supposed to weigh on company earnings. 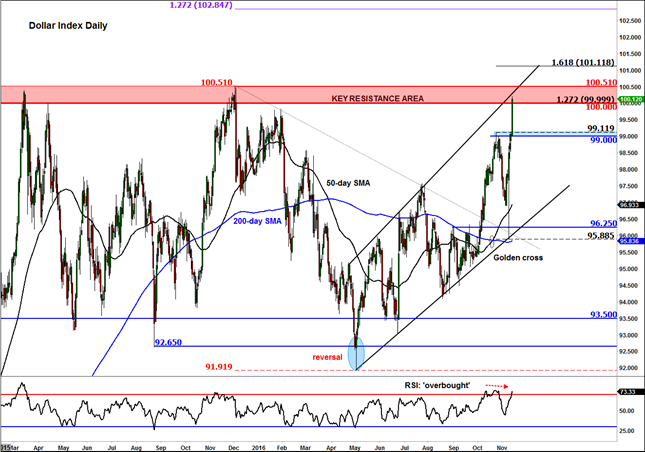