Gold’s rally from last week has come to an abrupt halt at the start of this week’s trading. After falling back below $1300 per troy ounce, the precious metal has extended its decline today, tracking the EUR/USD exchange rate lower as investors weigh ongoing hawkish rhetoric from the Federal Reserve against an improving Eurozone economy.

Gold’s rally from last week has come to an abrupt halt at the start of this week’s trading. After falling back below $1300 per troy ounce, the precious metal has extended its decline today, tracking the EUR/USD exchange rate lower as investors weigh ongoing hawkish rhetoric from the Federal Reserve against an improving Eurozone economy. Overall though I feel the EUR/USD may be heading lower from here rather than higher as the dollar remains fundamentally supported with the Fed being the most hawkish central bank out there. If I am correct, this would mean lower prices for gold as the dollar makes a comeback. The precious metal may also be undermined by rising equity prices across the globe, which further dampens demand for the safe haven asset. In the US, the major indices have already been hitting record high levels, almost on a daily basis. In Europe, the German DAX index last week broke above 13000 for the first time ever. The UK’s FTSE is hanging just below its own all-time high. In Japan, the benchmark Nikkei index is hitting decade highs again as the Bank of Japan continues to maintain an extraordinary loose monetary policy stance. So, you get the picture: stock markets are rising and the dollar is potentially on the verge of a comeback after its decline since the turn of the year. Against this fundamental backdrop, the safe haven and buck-denominated precious metal, which also pays no interest and costs money to store, currently does not look very appealing to many investors. But things can and will change in the future. For example, a stock market correction, which is now long overdue. However, for the time being I am not bullish on gold, not when it has again failed to sustain itself above that key $1300 hurdle. If gold now breaks below last week’s low at $1276, we will have a weekly bearish engulfing candle to work with. This would be technical rather bearish. As things stand, I would drop my bearish view only if we get a clean break above $1300 again. 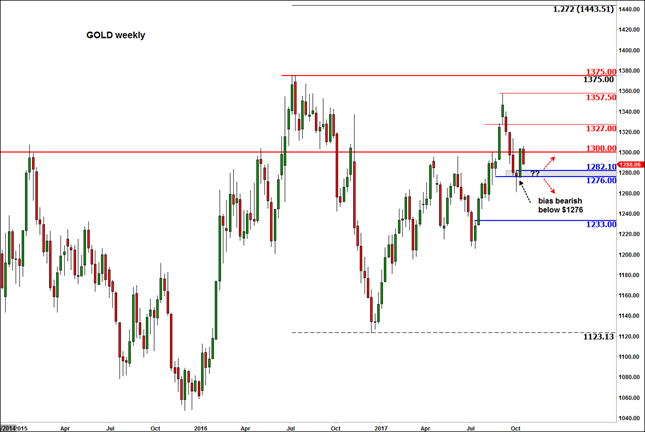