The expectation for the Employment Change for April in Canada is -4,000,000!

US Initial Claims data released earlier today showed that 3,169,000 people applied for unemployment benefits during the week ending May 2nd.  Tomorrow, the US is expecting Nonfarm Payroll data to show that 21,000,000 people lost their jobs during the month of April.  The expected unemployment rate is 16% due to the shutdown of the economy because of the coronavirus.  Those are some scary numbers!  However, with all the attention on the enormous numbers expected out of the US, let’s not forget about the neighbors to the north of the US, Canada.  They are set to release their own employment data at the same time as the US!

The expectation for the Employment Change for April in Canada is -4,000,000!  With a population 8 times smaller than that of the United States, the expected number of job losses during April is higher for Canada than that of the US in percentage terms (11% vs 9%).  The unemployment rate is expected to increase from 7.8% in March to 17% in April.  As with the US, these disturbing numbers are due to the near shutdown of the entire country for during April due to the coronavirus.

Since putting in a high on March 19th, USD/CAD has been putting in lower highs and testing support lows near 1.3850.  This has led to a descending triangle formation.  The expectation of this formation is an eventual break to the downside.  If the pair closed today below 1.4025, today’s candle will be a bearish engulfing candlestick formation, which is very bearish.  USD/CAD is down .85% despite the DXY being positive on the day!  Over the last month, USD/CAD has decoupled from Crude Oil, as shown in the correlation coefficient and the bottom of the daily chart.  However, with crude closing down 7% yesterday, and currently up 7.4% today, is it possible the 2 assets are going to move together again? 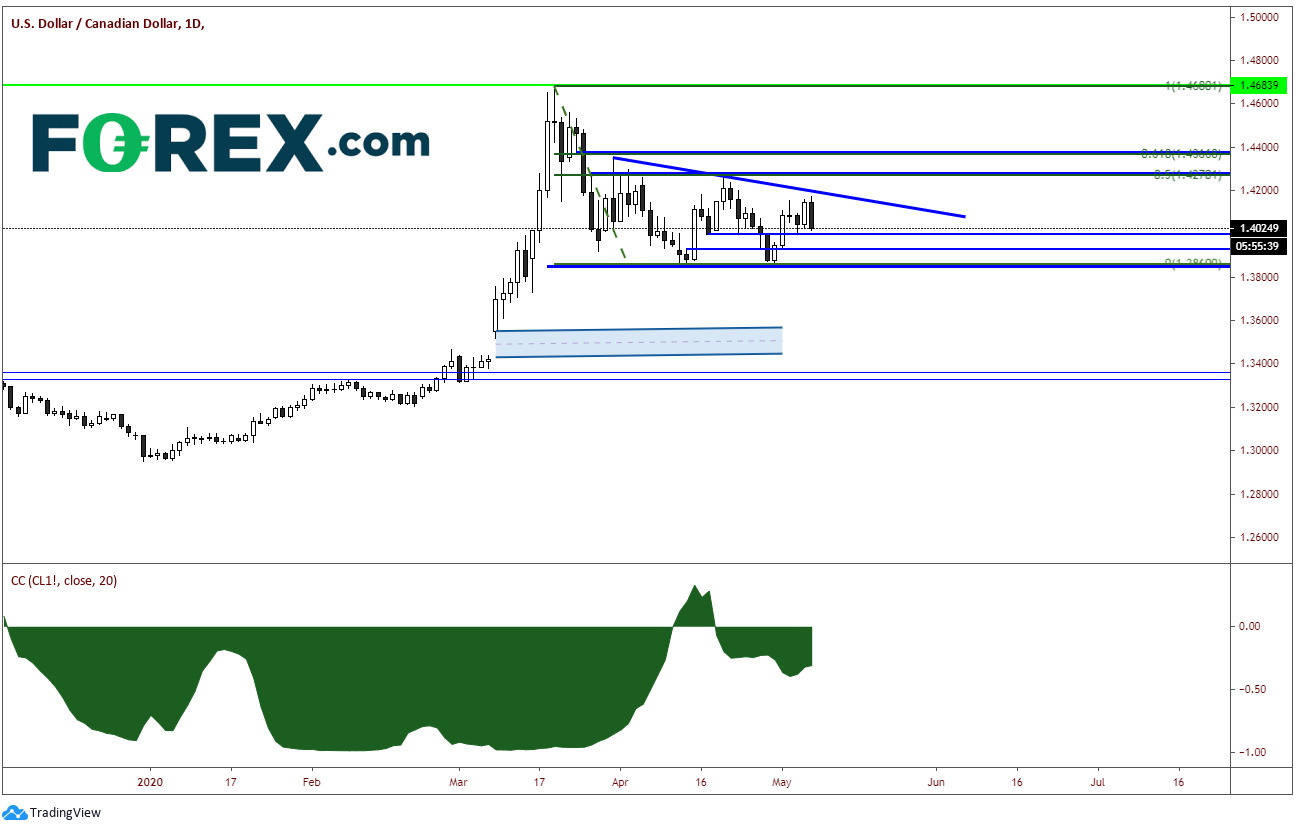 Although the poor employment data is already expected from both the US and Canada, USD/CAD may be volatile around the number as they are both due out at the exact same time (8:30am ET). In addition, USD/CAD may be beginning to trade inversely with crude oil once again, which could contribute to Canadian Dollar volatility near the pit opening.