EU indices down this morning | TA focus on ENI

MORNING TRADING
In Asian trading hours, EUR/USD remained subdued at 1.0770 while GBP/USD was broadly flat at 1.2349. USD/JPY was little changed at 107.63. This morning, government data showed that Japan's national CPI grew 0.4% on year in March (as expected).

Hikma Pharmaceuticals, a drug maker, was downgraded to "neutral" from "buy" at Goldman Sachs.

BAE Systems, a defense and aerospace company, was upgraded to "buy" from "hold" at Societe Generale.

Rolls-Royce and Meggitt, the two engineering groups were downgraded to "sell" from "hold" at Societe Generale.


#GERMANY#
Deutsche Lufthansa, an airline group, said it "expects a significant decline in liquidity in the coming weeks" and is "in intensive negotiations with the governments of its home countries regarding various financing instruments to sustainably secure the Group's solvency in the near future". Meanwhile, the company announced that preliminary 1Q adjusted EBIT loss widened to 1.2 billion euros from 336 million euros in the prior-year period and revenue dropped 18% on year to 6.4 billion euros. Also, available liquidity currently amounts to around 4.4 billion euros.


#FRANCE#
Casino, a mass-market retail group, announced that 1Q net sales fell 0.8% on year (+7.9% organic growth) to 8.29 billion euros, citing "an unprecedented growth in demand directed for food retailing" due to the Covid-19 epidemic. The company added: "Sales in the last four weeks grew +24% on average at Franprix, Casino Supermarkets, and Convenience stores, which have seen a surge in new customers, and triple-figure growth in food E-commerce, especially in home delivery by Monoprix."

Air Liquide, an industrial gases supplier, reported that 1Q revenue fell 1.3% on year (+0.6% on a comparable basis) to 5.37 billion euros. The company stated: "The most widely held hypothesis today is that the second quarter will be highly impacted by the crisis, followed by gradual relaxation of lock-down measures between the end of the second quarter and the beginning of the third quarter, depending on the continent. (...) Air Liquide is nonetheless confident in its ability to further increase its operating margin and to deliver (full-year) net profit close to the 2019 level, at constant exchange rates."

Vinci, a concessions and construction company, reported that 1Q revenue was broadly flat on year at 9.69 billion euros (-3.3% on a like-for-like basis). The company said: "In these circumstances, we expect a pronounced decline in the Group's revenue in the next few months. (...) It appears nevertheless that VINCI will be unable to meet its target, announced on 5 February 2020, of achieving revenue and net income growth in 2020."

Saint-Gobain, a construction materials producer, reported that 1Q revenue slid 9.8% on year (-4.9% like-for-like) to 9.36 billion euros, with volumes down 5.5%. The company said: "Given the impact of the global economic crisis caused by the coronavirus, the Group expects a challenging second quarter 2020 before a recovery in the second half."

Bureau Veritas, a laboratory testing and certification services provider, posted 1Q revenue fell 3.0% on year (-1.6% organic growth) to 1.14 billion euros. Regarding the outlook, the company said: "In these unprecedented circumstances, the 2020 targets are no longer relevant. (...) The Group expects a very significant impact on the second quarter (Q2) of 2020, due to the lockdown measures that have been put in place in Europe, the United States and Latin America notably. (...) Bureau Veritas' Board of Directors took the exceptional decision to cancel the dividend (EUR 0.56 per share) due to be proposed."

Safran, a defense and aerospace company, was downgraded to "sell" from "hold" at Societe Generale.


#ITALY#
ENI, an oil and gas company, reported that 1Q net income slumped to 59 million euros from 992 million euros in the prior-year period and adjusted operating income declined 44% on year to 1.31 billion euros. The company said it has lowered 2020 capex forecast by 30%, compared with its initial plan, and suspended the share repurchase plan for 2020. 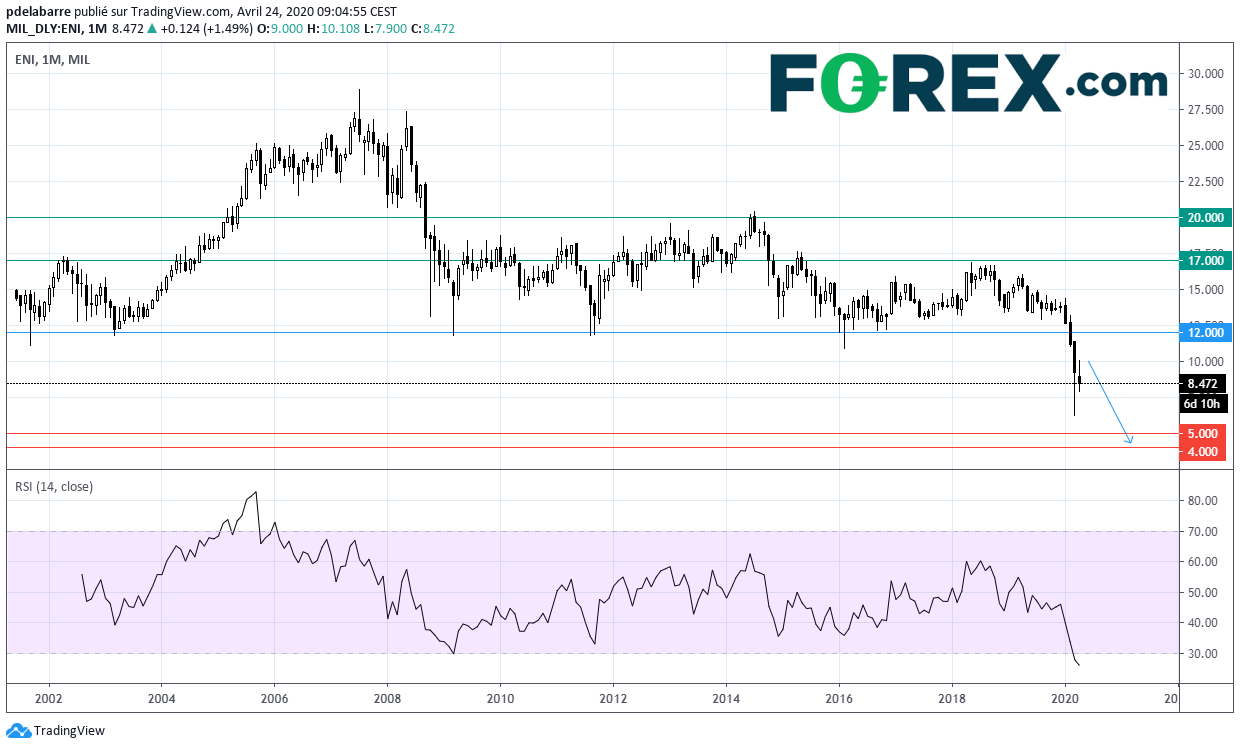 #SWITZERLAND#
Nestle, a food and drink processing conglomerate, announced that 1Q revenue slid 6.2% on year (+4.3% organic growth) to 20.81 billion Swiss franc. Regarding the outlook, the company said: "As it is still too early to assess the full impact of COVID-19, we maintain our original full-year 2020 guidance for the time being. We expect continued improvement in organic sales growth and underlying trading operating profit margin. Underlying earnings per share in constant currency and capital efficiency are expected to increase."