EU indices slightly up this morning | TA focus on Antofagasta 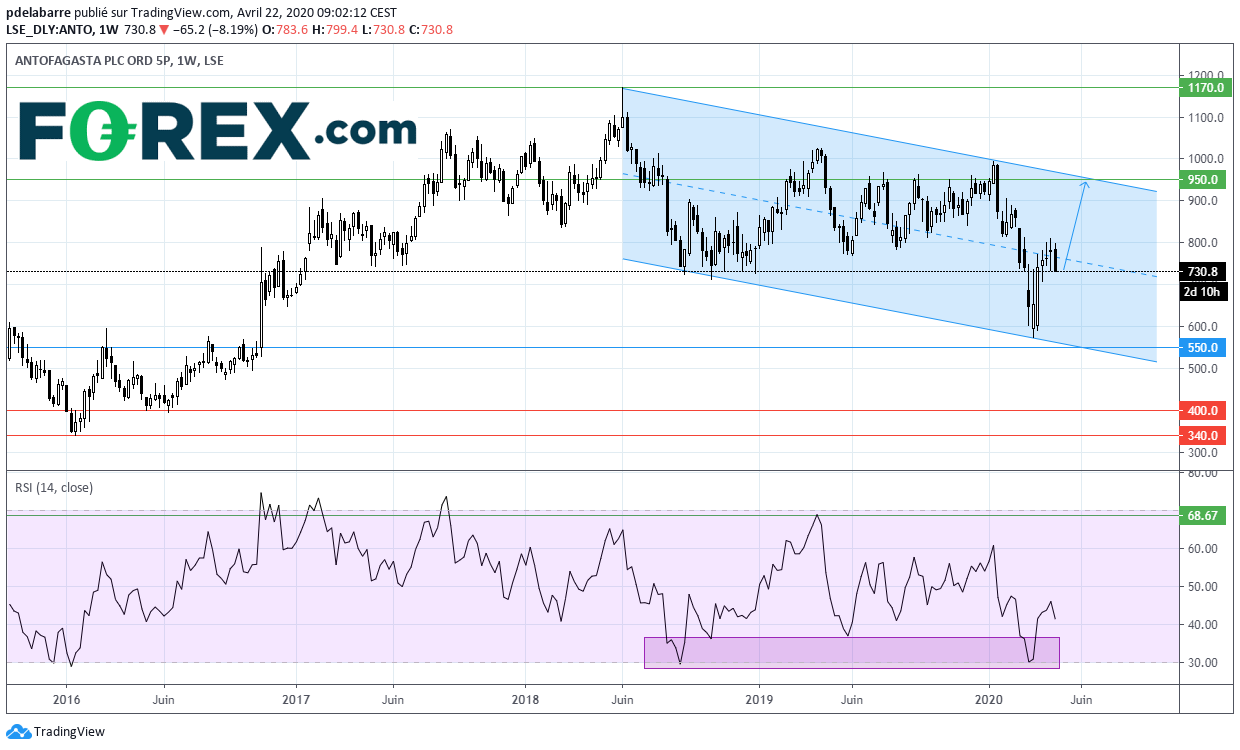 
CRH, a building materials supplier, issued a 1Q trading update: "Notwithstanding the evolving situation with regard to the global spread of COVID-19, the Group had a positive start to the year with first quarter like-for-like sales 3% ahead of 2019. (...) In light of the recent market volatility, the Board has decided to postpone the Group's share buyback program until further notice. As announced on 28 February, the Board has proposed a final cash dividend of E0.63 per share for the consideration of shareholders at tomorrow's AGM."


Hiscox, an insurance provider, provided an update on COVID-19: "On the basis that disruption caused by restrictions on travel and mass gatherings continues for a six month period from March 2020, Hiscox expects to pay net claims totaling up to $150 million. (...) The level of economic loss experienced is likely to be materially lower than reported revenues."

Sage Group, an enterprise software company, was downgraded to "sell" from "neutral" at Goldman Sachs.


#GERMANY#
Hannover Re, an insurance group, announced the withdrawal of its profit guidance for the current year, citing ongoing COVID-19 crisis. The company said it expects 1Q net income to grow 2.1% on year to 300 million euros, while EBIT is anticipated to drop 5.3% to 426 million euros.

Talanx, an insurance company, said it has decided to withdraw profit outlook for 2020, amid ongoing coronavirus pandemic, while confirming its dividend proposal of 1.50 euros per share for 2019. The company reported that preliminary 1Q net income fell 5.1% on year to 223 million euros.


#FRANCE#
Vivendi, a mass media conglomerate, announced the acquisition of a 10.6% stake in media company Lagardere without providing financial terms. The stake is worth about 241 million euros based on Lagardere's share price on Tuesday.

Kering, a luxury goods conglomerate, reported that 1Q revenue slid 15.4% on year to 3.20 billion euros, down 16.4% on a comparable basis.

Carrefour, a retail group, was downgraded to "neutral" from "buy" at Goldman Sachs.


#SPAIN#
Grifols, a pharmaceutical and chemical manufacturer, was downgraded to "neutral" from "overweight" at JPMorgan.

ASM International, a semiconductor process equipment supplier, posted 1Q adjusted net income rose 47.0% on year to 78 million euros on net sales of 325 million euros, up 30.7%. The company said: "For Q2 on a currency comparable level we now expect sales of E300-350 million. We slightly widened the range by reducing the lower end compared to the earlier indicated range of E330-350 million."

UniCredit, an Italian bank, said it will book an additional 0.9 billion euros generic loan loss provisions, as it sees the eurozone's full-year 2020 GDP declining 13% before a 10% recovery in full-year 2021.

Fiat Chrysler Automobiles, a vehicle manufacturer, announced that it has drawn down its 6.25 billion euros revolving credit facility, citing the continuing uncertainty relating to the impacts of COVID-19.

Credit Suisse, a banking group, was downgraded to "hold" from "buy" at HSBC.


#SCANDINAVIA#
Ericsson, a networking and telecommunications company, announced that 1Q net income dropped 5% on year to 2.3 billion Swedish krona and operating income slid 12% to 4.3 billion Swedish krona on revenue of 49.8 billion Swedish krona, up 2%. The company said: "We remain positive on the longer term outlook, but the second quarter is likely to be a tad softer than normal due to timing of strategic contracts and uncertainty induced by Covid-19. (...) However, with current visibility we maintain the targets for 2020 and 2022."