Next week could be a big one for the EUR/GBP due to the large number of market-moving economic data from both the UK and the Eurozone, and the ECB’s policy meeting on Thursday. In addition, traders are still trying to figure out that if Britain were to vote to leave the EU, would this necessarily be a bad or good outcome for the economy in the long run. If bad for the UK, it could be just as bad or even worse one for the Eurozone. Therefore, should the EUR/GBP pair continue pushing higher? Well, this week the cross has actually dropped, not because the GBP had anything to do with it, but rather the euro weakened across the board. The EUR/USD, for one, could not break through the 1.1450 barrier after several attempts and as a result the pair dropped for a time to below 1.1250 as the market tried to find the fair value amid the changing expectations about the next Federal Reserve rate increase due to the disappointing US macroeconomic data.

But as far as the EUR/GBP is concerned, these are among the potential market moving events to watch out for next week:

Depending on the outcome of the abovementioned fundamental events and/or any significant changes in the UK-EU referendum opinion polls, the EUR/GBP could move sharply next week. Indeed, from a technical point of view, the EUR/GBP’s strong upward trend may be about to end, and the long-term bear trend could resume. Well, at least that’s what the weekly chart of the cross suggests might happen.

As can be seen, below, the EUR/GBP has reached a significant area of resistance between the 0.80 and 0.81 area. For a start, 0.80 is a psychological level. A lot of trading tends to occur around such levels, often with good volumes. Note, for example, how the EUR/GBP traded around the 0.70 handle where it created a significant medium-term bottom last year. Note also how long price took to form that low. Will it similarly take a long time to form a potential top here? Let’s wait and see. In addition to the important of the psychological level, the EUR/GBP has also reached the top of its long-term bearish channel, and previous resistance. What’s more, the previous attempts to break above the 200-week moving average did not last very long. Will this be another such occasion?

Going forward, a breakdown below key short-term support at around 0.7930, which was previously resistance, could lead to a significant withdrawal of bids and a sudden move lower. A potential fake out move here on the other hand would suggest that the sellers are lacking in confidence, in which case the short-term bullish trend could resume for another bounce towards the noted 0.80-0.81 area again. Thus it may pay to be patient and wait for confirmation before making a decision around the 0.7930 level. 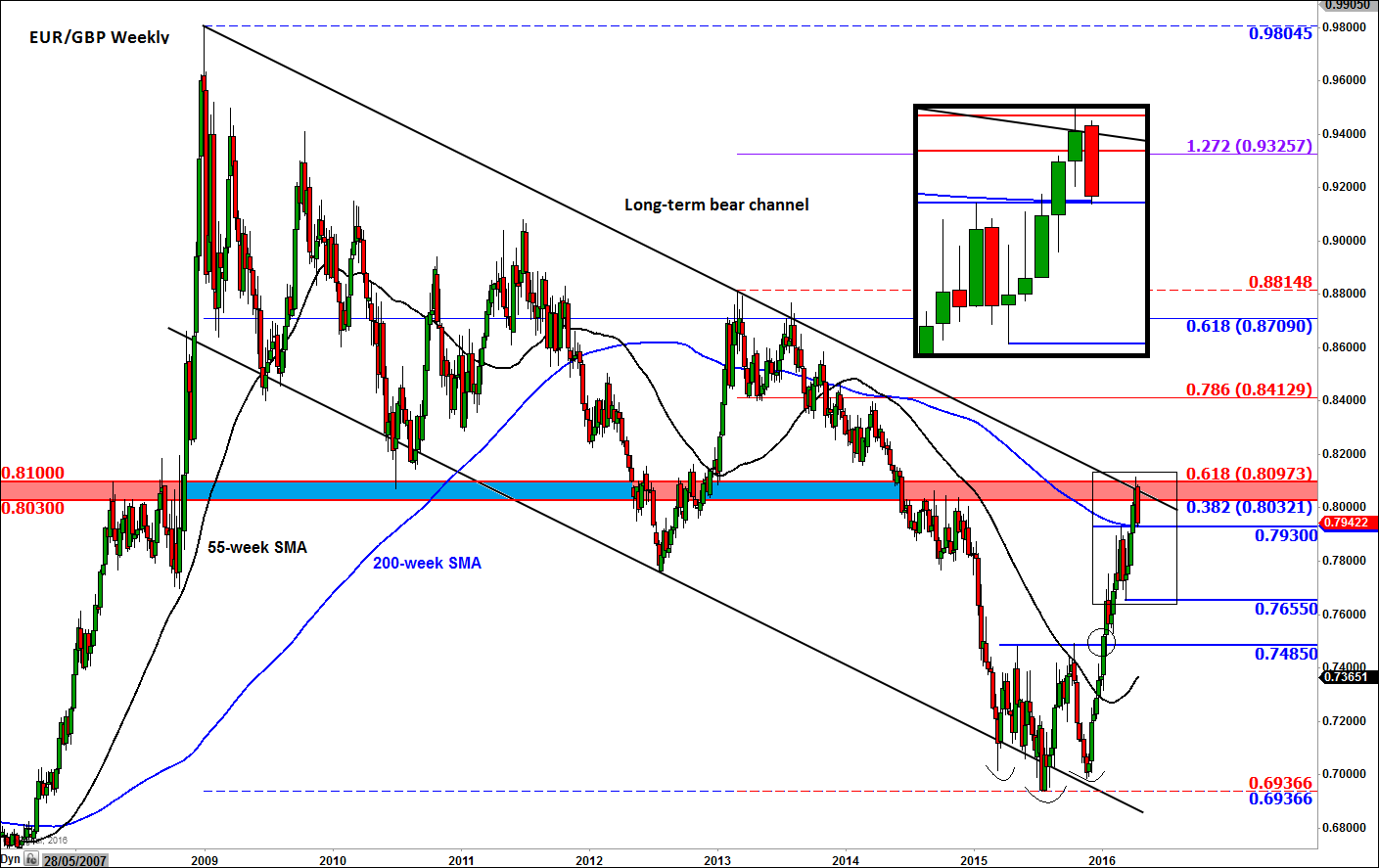