Concerns over the economic impact of the possibility of Britain leaving the EU have been a key theme weighing on the pound this year. Last week however there was relief as the "remain" camp edged higher in some polls. Meanwhile bets that Britain will remain in the EU surged higher last week and the odds of Brexit were slashed. It looks like US President Barack Obama’s intervention in the debate has had a big impact. As the odds of Brexit have been slashed so too have short positions in the pound, for there was nothing else constructive last week to support the currency as the latest employment and retail sales figures both disappointed expectations. This week’s key data for the UK is the first quarter GDP reading on Wednesday morning. Economic growth is expected to have eased to 0.4% from 0.6% in Q4 of last year.

The GBP/USD and GBP crosses have all climbed higher in recent trading days. Among the GBP crosses catching my eyes is the GBP/NZD, which will be an interesting pair to watch this week because of the UK GDP data and also the Reserve Bank of New Zealand meeting, both on Wednesday. Although the RBNZ is unlikely to make any changes to its policy after the surprise rate cut at its last meeting, it could nonetheless provide a bearish outlook on the New Zealand economy and hint at further interest rate cuts down the line. So, there is the possibility that the NZD could weaken. Although that being said, the surprise rate cut last time only had a temporary influence on the NZD before the currency surged higher.

From a technical point of view, the GBP/NZD has been in a strong downward trend since hitting a peak at 1.5360 in August of last year. However following last week’s upsurge, the GBP/NZD broke through its bearish trend line and climbed back to around the long-term support and resistance level of 2.10 where it was trading at the time of this writing. As a result of last week’s rally, the GBP/NZD also formed a large bullish engulfing candle on its weekly chart (see the inset). This particular candlestick formation shows a shift from selling to buying pressure. What's more, all these developments have occurred around the long-term 61.8% Fibonacci retracement level (~2.0630), which is significant. Furthermore, the RSI momentum indicator has recovered from the "oversold" threshold of 30, formed a positive divergence with price and broke its own bear trend.

So, this could be the start of a significant recovery in the GBP/NZD. If 2.10 fails to offer significant resistance now then a rally towards the next reference point around 2.15 could become likely. However if 2.1000 holds as resistance, which is also where the 50-day moving average comes into play, then price may drop all the way back to the point of origin of the breakout around 2.0630-2.0720 before potentially resuming its rally. A daily closing break below this level however would invalidate this bullish outlook. 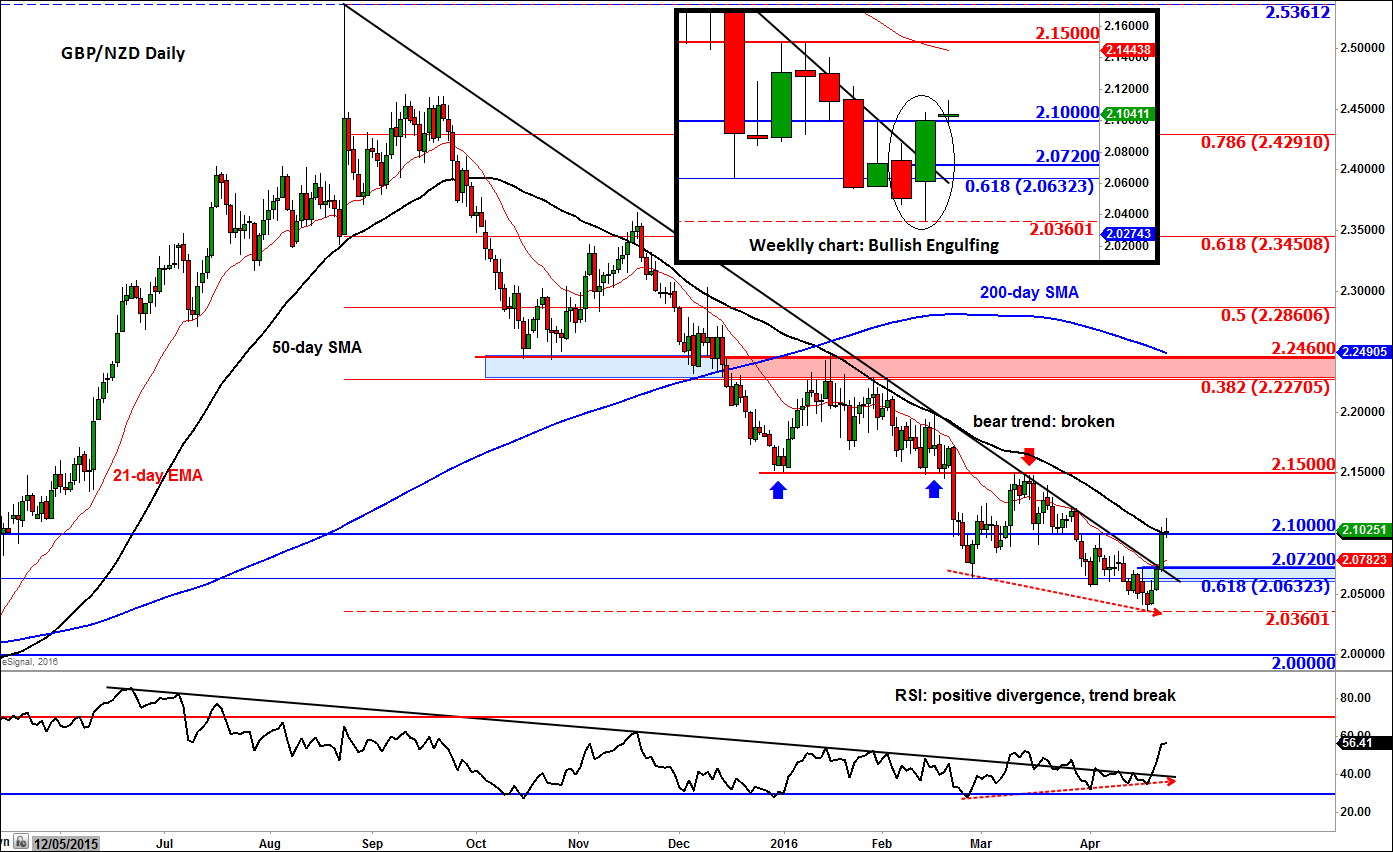