The Fed turning less hawkish is definitely good news for emerging market currencies, some of which have had a year to forget. If EM currencies now stabilise then this should be good news also for equities, particularly if the US and China manage to end their trade dispute at the G20 summit which begins on Friday.

There’s no doubt in my mind that Fed Chair Jerome Powell was deliberately preparing the market for a pause in the once-a-quarter rate hikes in 2019 yesterday. So, I think the Fed will hike one more time in December, but it will then go in a wait-and-see, data-dependant mode. While this clearly is a negative development for the dollar, the frustrating thing for the dollar bears is that other central banks are also not in a rush to normalise their respective monetary policies. As such, the downside for the dollar could be limited — especially against the likes of the Swiss franc and Japanese yen, with the Swiss National Bank and Bank of Japan continuing to be among the most dovish of major central banks out there. But the Fed turning less hawkish is definitely good news for emerging market currencies, some of which have had a year to forget. If EM currencies now stabilise then this should be good news also for equities, particularly if the US and China manage to end their trade dispute at the G20 summit which begins on Friday.

DAX could benefit from a potential rebound for EM currencies

A potential rebound in EM currencies should help to boost demand from places like China again, which should be good news for export-oriented economies such as Germany. The German DAX index could therefore stage a rebound, if things unfold as we have outlined above. Technically, the DAX may have already created a reversal pattern after failing to hold beneath its old low at 11050. This potential false break reversal pattern would be confirmed upon a break above the most recent high at 11440, although a break of the downtrend will also be a bullish development. Conversely, a break below the 11270 support level would be deemed a bearish outcome. 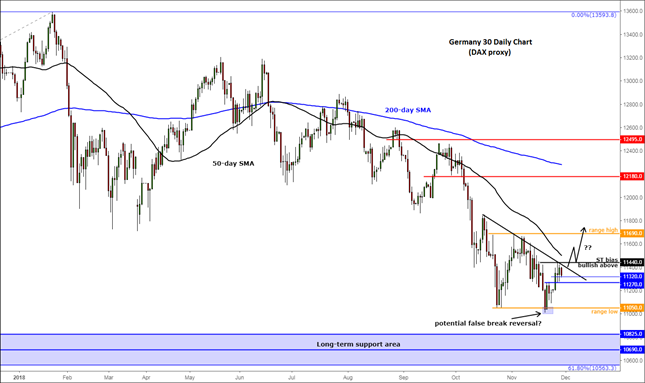