Thursday morning’s release of the ECB monetary policy meeting accounts, or the minutes from the European Central Bank’s last meeting in December, prompted a surge for the euro on speculation surrounding potentially tighter monetary policy in the eurozone.

Thursday morning’s release of the ECB monetary policy meeting accounts, or the minutes from the European Central Bank’s last meeting in December, prompted a surge for the euro on speculation surrounding potentially tighter monetary policy in the eurozone. ECB officials discussed reduction of the central bank’s massive bond purchasing program but also focused on interest rates, which has led to increased market expectations that tighter ECB policy might be on the horizon amid strong European economic growth.

The hawkish-leaning minutes resulted in a euro surge against the US dollar, Japanese yen, and British pound, among others. In the case of EUR/JPY, the currency pair bounced on Thursday off a key uptrend support line extending back to the August lows. This bounce occurs after the currency pair fell sharply earlier in the week as the euro stumbled and the yen surged when the Bank of Japan reduced its purchases of Japanese government bonds, leading to speculation that the central bank could wind down its massive stimulus program at some point in the foreseeable future.

The directional bias for EUR/JPY going forward will depend to a large extent upon expectations regarding the comparative pace of monetary policy tightening and stimulus tapering between the ECB and BoJ. Despite Thursday’s EUR/JPY bounce, however, the yen has remained strong overall within the past several days. This yen strength has the potential to weigh on EUR/JPY going forward, especially if the euro resumes hesitation near its overbought highs.

A key technical triggering event for any further EUR/JPY weakness would be a breakdown below the noted uptrend line extending back to the August lows. In the event of such a breakdown, the next key targets immediately to the downside are around the 132.00 and 131.15-area support lows. 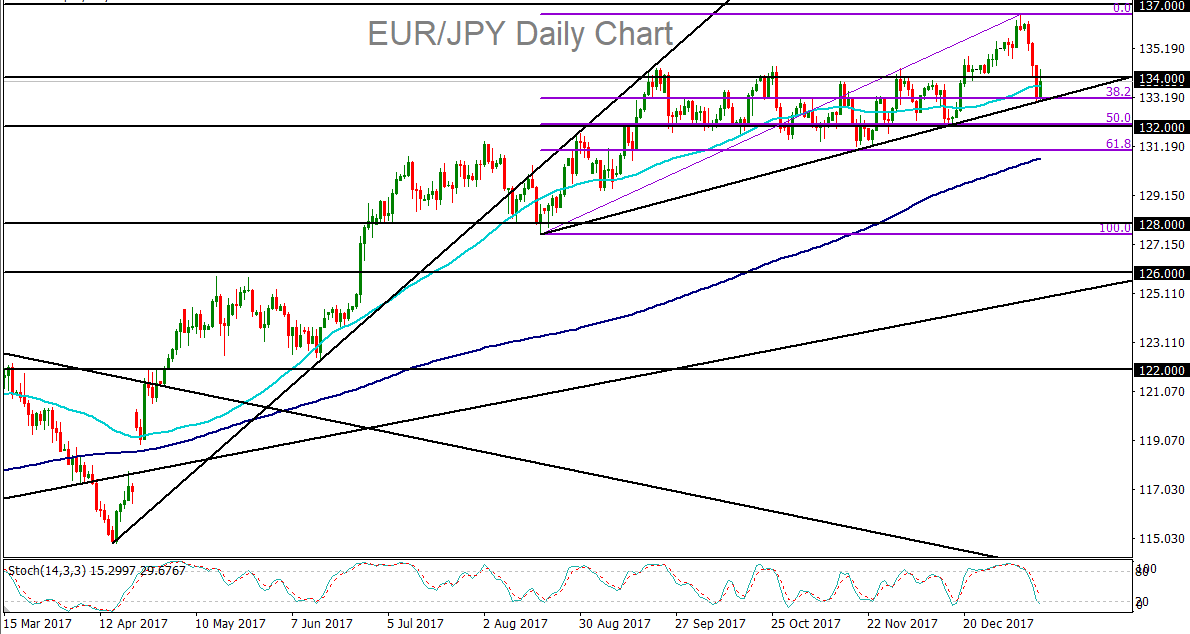