<p>The euro fell sharply during the European Central Bank press conference this afternoon. In short, President Mario Draghi said the ECB was ready to act as he delivered a bearish assessment on the Eurozone economy, saying the downside risks have increased since the start of the year and that inflation outlook is significantly lower due to the impact of renewed oil price drop. As a result, the ECB will review and may reconsider its monetary policy stance in March.</p>

The euro fell sharply during the European Central Bank press conference this afternoon. My colleague Matt Weller has written a full review of the ECB press conference, which you could find HERE. In short, President Mario Draghi said the ECB was ready to act as he delivered a bearish assessment on the Eurozone economy, saying the downside risks have increased since the start of the year and that inflation outlook is significantly lower due to the impact of renewed oil price drop. As a result, the ECB will review and may reconsider its monetary policy stance in March.

The market’s reaction to the dovish ECB communication was clear. Traders dumped the euro, while stocks rebounded on hopes of more QE, perhaps as early as March. But given that the euro is a funding currency, the on-going volatility in the stock markets may prevent it from falling significantly further against the dollar and other stronger currencies – this is due to traders unwinding their carry trades. Consequently, we may see a more profound reaction against another lower-yielding currency such as the Japanese yen, which is also considered a safe haven. Conversely, if risk assets rally, then the EUR/USD may be a better currency pair for those who are bearish on the euro.

Thus, if equities resume their declines soon then the EUR/JPY could get absolutely hammered as traders rush to the perceived safe haven that is the Japanese yen.  But at the time of this writing, the EUR/JPY was trading inside a key support area between 126.00 and 127.00. Here, it was also testing the lower trend of its bearish channel and the 161.8% Fibonacci extension level of the last upswing. Therefore the possibility for a technical bounce is there, for now. But even if it rallies, the sellers will remain in control for as long as price remains within the bearish channel. Some of the other shorter term resistance levels to watch include the recent consolidative range high around 128.50, followed by previous support at 129.65.

But in the (more likely) event that the EUR/JPY fails to rally, a breakdown below the above-mentioned support area (126.00-127.00) could pave the way for a significant drop as there is little further short-term support levels immediately below here, barring perhaps the psychologically-important 125.00 handle. Below 125.00, the next stop could be around 122.00, where a couple of Fibonacci extension levels converge with the 50% retracement level of the entire 2012-2014 rally. 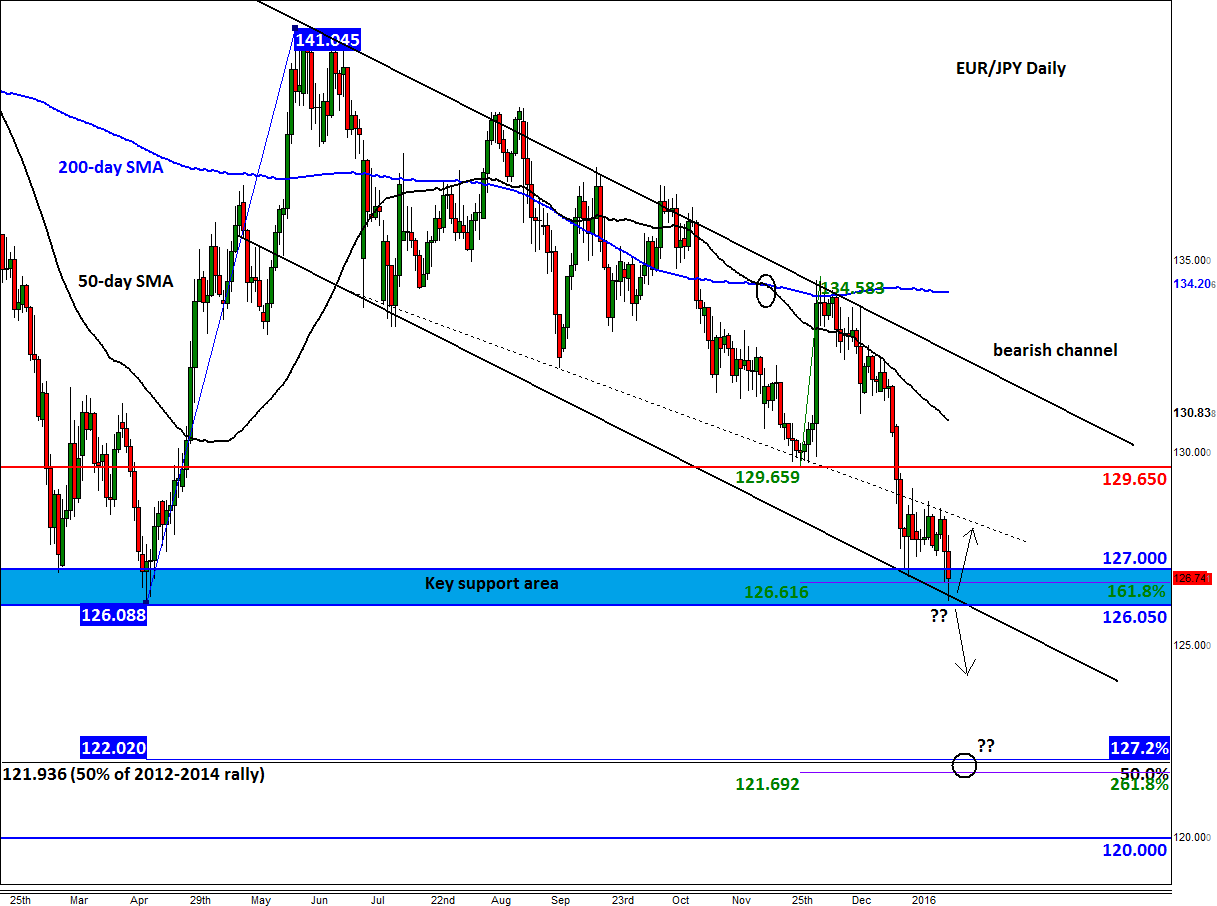