EUR/USD breaks down as dollar surges on rising yields

The US dollar surged sharply on Monday, extending its week-long rebound and rally, as 10-year US Treasury bond yields rose ever closer to the heavily anticipated 3% mark.

The US dollar surged sharply on Monday, extending its week-long rebound and rally, as 10-year US Treasury bond yields rose ever closer to the heavily anticipated 3% mark. This dollar surge on higher interest rate expectations prompted several major moves in currency markets. The US dollar index broke out above a key downtrend resistance line, approaching the important 91.00 level in the process. USD/JPY broke out above the key 108.00 level. And EUR/USD dropped sharply to approach the 1.2200 level, extending its recent major breakdown below a key uptrend support line that extends back one year to April of 2017.

Aside from the rebounding strength of the dollar, the euro is also in sharp focus this week ahead of the European Central Bank decision on Thursday. The ECB is not expected to make any major policy changes at this time. However, further guidance on the potential timing of the end to QE stimulus and possible future interest rate increases will take center stage. Hawkish rhetoric will likely be constructive for the recently struggling euro, while dovish tones are likely to weigh further on the shared currency.

On Monday, key manufacturing and services PMI data were released in France, Germany, and the Eurozone as a whole. The data was generally mixed, with both France and Germany showing mostly better-than-expected results, but the Eurozone overall lagged expectations in the manufacturing sector. The resulting movement of the euro itself was not substantially pronounced – the sharp drop for EUR/USD was primarily caused by exceptional yield-driven strength in the dollar on Monday.

From a technical perspective, as noted, the extended trendline breakdown is a significant bearish indication for EUR/USD. As of Monday, the currency pair has tentatively established a new 7-week low, dipping slightly below the most recent lows seen in early April. The next major downside hurdle is around the 1.2150 support area, which represents the key early-March low. With any further yield-driven boost for the dollar and/or a dovish ECB on Thursday, there is a significant potential for a EUR/USD support breakdown. In that event, key downside targets on the breakdown can be found around the 1.2090 and 1.1915 support areas. 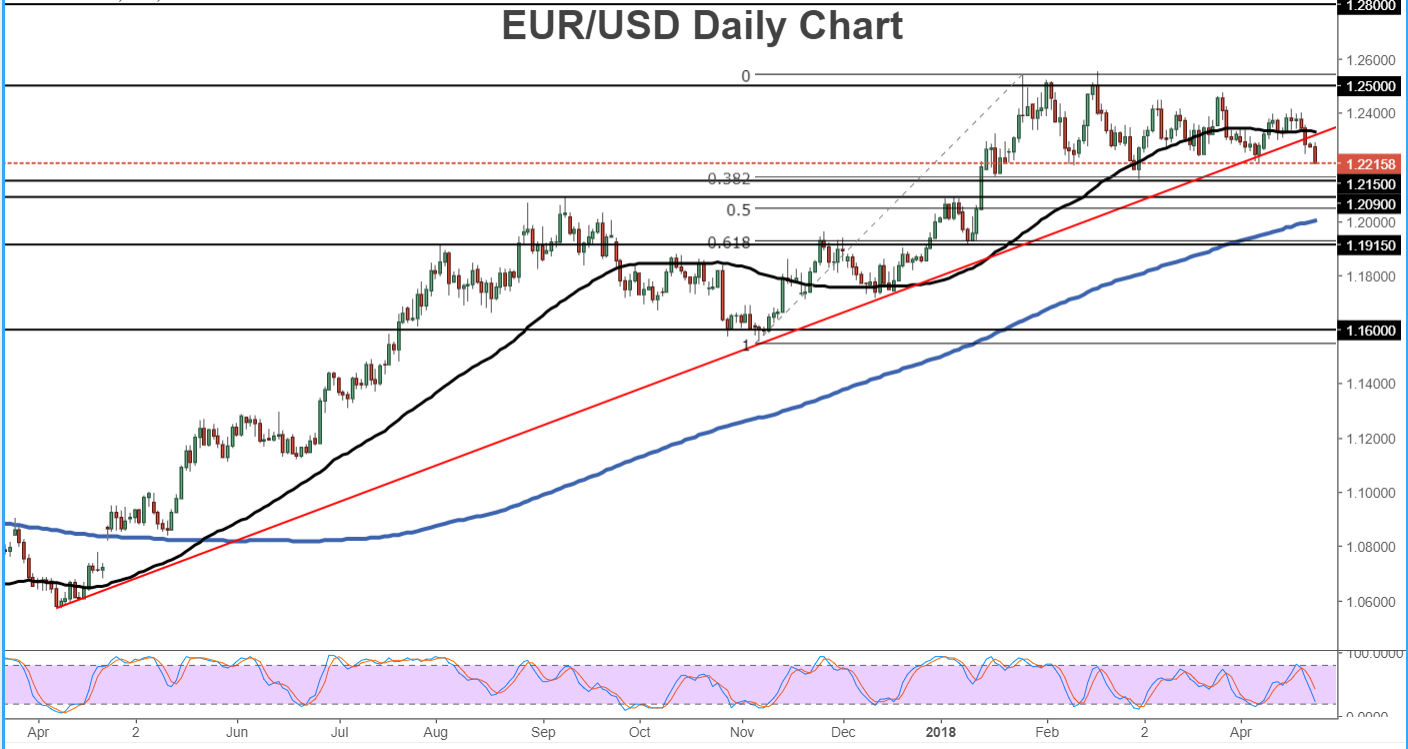