The FX markets are fairly quiet this morning as traders await direction from the US Federal Reserve and later on the Reserve Bank of New Zealand. Neither central bank is expected to make any changes, though there is a chance the RBNZ will surprise with a cut in interest rates due to the continued falls in key commodity prices. As my colleague Matt Weller has pointed out, it is the language of the policy statement that will be of most interest for Fed watchers. The market is fully expecting the Fed to deliver a slightly dovish statement given the on-going financial market turbulence and deterioration in Chinese data. If confirmed, the dollar could fall slightly – "slightly" because this outcome is at least partially priced in. On the other hand, if the Fed provides a strong signal that a March rate increase is still on the table then that could underpin the dollar as this outcome would be a surprise.

The EUR/USD is among the currency pairs which could benefit the most from a dovish Fed. After all, it has completely shrugged off last week’s hints of more ECB QE from Mario Draghi. If this sort of news fails to move the market in the way one would have expected it to, then there can be a good argument made that a near term bottom has been formed. The euro is of course also a funding currency, which tends to do particularly well when traders unwind their carry trades. Thus, if equities tumble again then this could provide additional support to the euro. In fact, the global stock markets are a touch weaker at the time of this writing. After yesterday's rally, sentiment has been dented slightly in part because of scepticism over Apple’s earnings results and due to the fact there has been renewed selling pressure in the oil market after the industry group American Petroleum Institute reported a huge build in US oil inventories. US index futures point to a lower open on Wall Street.

Given that there is no major macro pointers scheduled until 15:00 GMT, when US New Home Sales data is released, technical buying and selling could dominate the agenda in the interim. The official US crude stockpiles data from the Energy Information Administration will come in at 15:30, followed by the FOMC policy statement at 19:00 and then the RBNZ rate decision at 20:00 GMT.

From a technical point of view, the EUR/USD’s desire to hold steady above the pivotal 1.0800/20 support area is clearly a bullish development in the near-term. At this stage however there are no technical indications that would suggest a significant rally is on the way either. Instead, we may see some moderate further gains, at least until such a time that some fundamental stimulus triggers a change in the market sentiment. Indeed, the EUR/USD is merely consolidating at these levels and is still below the well-established bearish trend line that goes back all the way to May 2014. The projected intersection point with this trend is currently around 1.1000, a level which also corresponds with the 38.2% Fibonacci retracement against the most recent swing high. Above the 1.1000 handle is the 200-day moving average, which comes in at 1.1050, followed by previous support at 1.1100. So, there is plenty of wood to chop for the bulls. Nevertheless, this group of market participants have the upper hand while price holds above the key 1.08 handle on a daily closing basis. 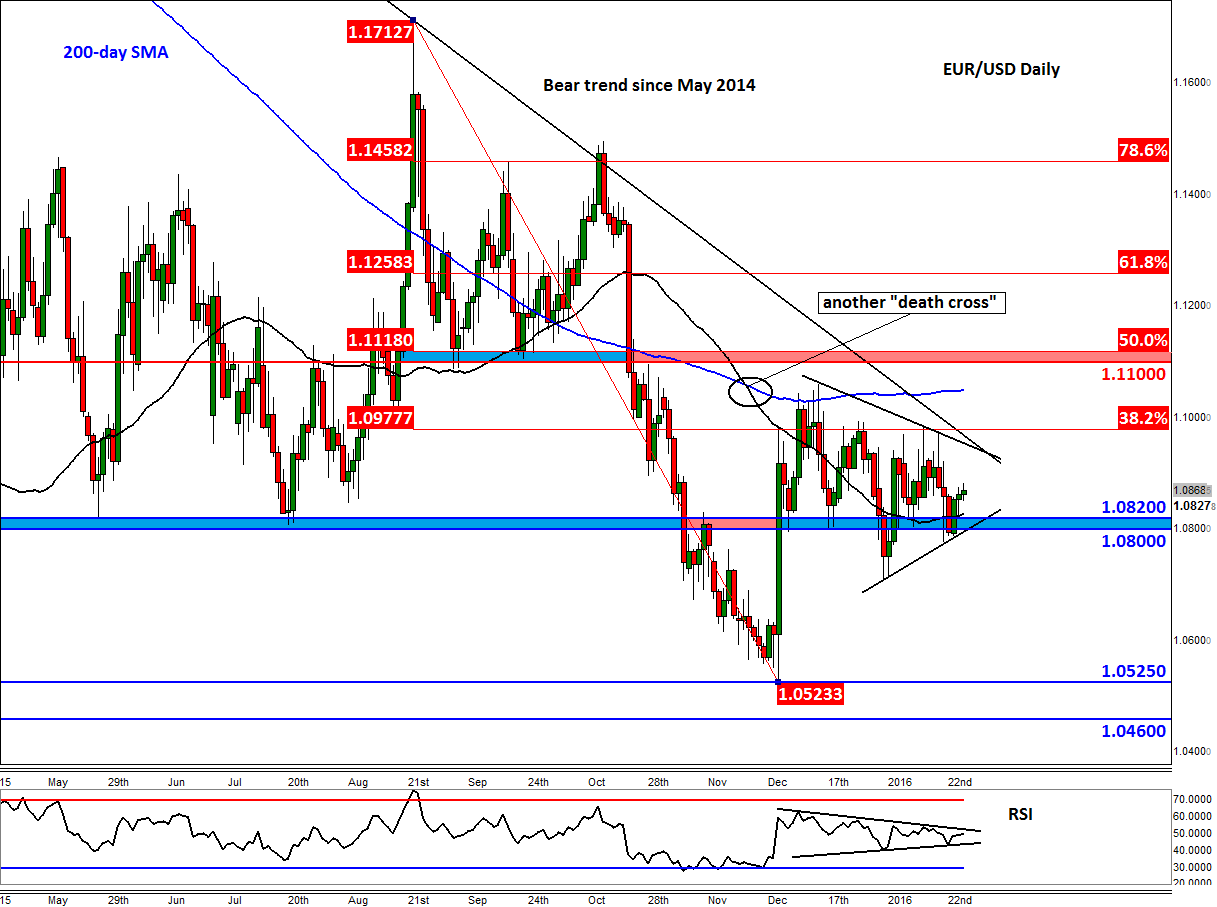