EUR/USD may retest highs amid ECB, US jobs, tariff disputes

If US and European markets have not had enough volatility to deal with this week amid the specter of possible trade wars stemming from US President Trump’s plans to impose hefty import tariffs and the European Union’s swift threats of retaliation, more potential volatility triggers are on the way.

If US and European markets have not had enough volatility to deal with this week amid the specter of possible trade wars stemming from US President Trump’s plans to impose hefty import tariffs and the European Union’s swift threats of retaliation, more potential volatility triggers are on the way. As concerns of a global trade war and likely chaos in the White House have dominated headlines, other key upcoming events have taken a back seat. This includes the European Central Bank decision on Thursday and the US jobs report on Friday. While these events will certainly be impactful on their respective currencies, trade war concerns will likely continue to be front and center for at least the balance of this week, as the White House has stated that Trump will present his detailed plan for tariffs and other trade issues on either Thursday or Friday. The White House also indicated that Canada and Mexico may be exempt from tariffs, which helped equity markets pare losses on Wednesday.

The European Central Bank’s rate decision, policy statement, and press conference on Thursday could clarify the ECB’s stance on when it may end its longstanding asset purchase program. While no interest rate changes are expected at this time, any hawkish talk of future monetary policy tightening, including the ending of QE stimulus and/or the possibility of rate hikes down the road, should serve as a bullish trigger for the euro. It is likely, however, that the ECB may attempt to limit hawkish verbiage in an attempt to avoid further euro strength.

As for the U.S. jobs report, given that recent equity market turbulence was initially driven in part by higher-than-expected wage growth figures in the last jobs report, this piece of data will take on particular importance. Current consensus expectations for month-over-month average hourly earnings growth in February are running at +0.2%. The unemployment rate is expected to have fallen to an extreme low of 4%, and the headline non-farm payrolls is expected to have risen by around 200,000 jobs, in-line with the previous month. On Wednesday, the ADP employment report showed a better-than-expected 235,000 private sector jobs added to the US economy in February.

From a technical perspective, EUR/USD has risen sharply from the 1.2200 support area since the beginning of March, much of it driven by dollar weakness, and has begun to approach its multi-year highs above 1.2500 once again. The currency pair has continued to rise within a long-term bullish trend and could be poised for an extension of this trend if the dollar continues to be weighed down by trade war concerns and other factors while the euro gets boosted by a potentially more hawkish ECB. In that event, the level to watch continues to be around the mid-February 1.2554 high. Any breakout above that level would confirm a continuation of the long-term bullish trend. 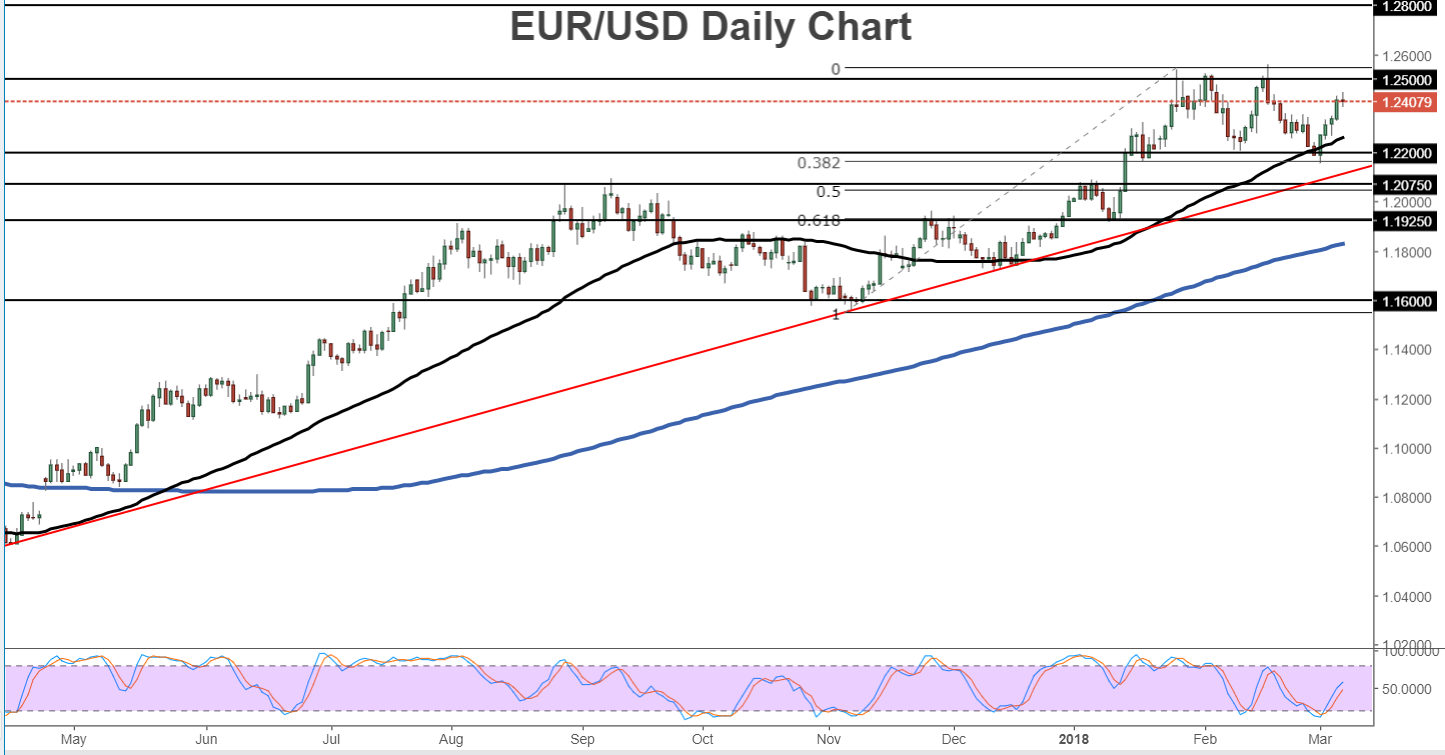