The euro clearly had a stellar year against the struggling US dollar in 2017, as was displayed by the EUR/USD rise from a low around 1.0350 in the beginning of last year up to a multi-year high just shy of 1.2100 in early September, for an overall 2017 range of approximately 17%.

The euro clearly had a stellar year against the struggling US dollar in 2017, as was displayed by the EUR/USD rise from a low around 1.0350 in the beginning of last year up to a multi-year high just shy of 1.2100 in early September, for an overall 2017 range of approximately 17%. After hitting that high in September, the currency pair pulled back for two months between early September and early November, but then recovered to approach its September high once again towards the end of the year.

Helping to boost the euro in recent months has been increased confidence in the continued strength of key European economies, along with expectations that the European Central Bank may end its massive asset purchase program later this year. Over this past weekend, an ECB official suggested that this could indeed be the case. Meanwhile, the US dollar continued to be plagued by doubts as to whether the US Federal Reserve can keep up with its most recent outlook for three more interest rate hikes in 2018, given ongoing concerns over lagging inflation.

The first trading day of the New Year on Tuesday saw EUR/USD continue to approach September’s 1.2100-area highs on continued dollar weakness before subsequently pulling back on Wednesday as the dollar rebounded modestly, in part due to Wednesday’s better-than-expected US manufacturing data and release of minutes from the Fed’s last meeting in December. The central bank raised the benchmark federal funds rate by 25 basis points during that meeting.

The FOMC minutes released on Wednesday contained both hawkish and dovish elements, but were initially interpreted as somewhat more hawkish-leaning due to optimistic assessments of the US economy and higher projections for GDP stemming from the anticipated effects of the new US tax policy. However, other aspects of the minutes, including the outlook for inflation, were more mixed.

From a technical perspective, EUR/USD’s Wednesday pullback from September’s 1.2100-area multi-year highs is significant. Amid the key US jobs data to be released this week, the 1.2100 level will be the key level to watch. A further pullback from that level could pressure the currency pair back down towards support targets at 1.1900 and 1.1700. Any breakout above the 1.2100 resistance area, however, would be an important technical event confirming a continuation of the EUR/USD uptrend, with the next major upside target around 1.2300. 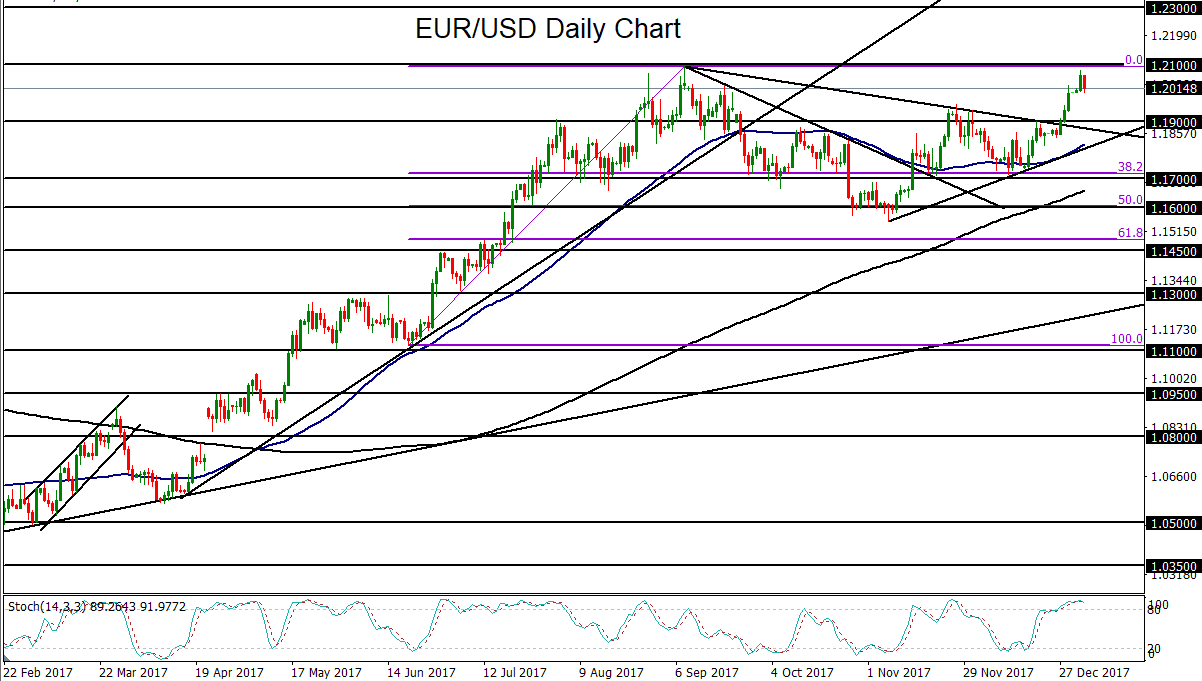