EUR/USD remains pressured on hawkish Fed ahead of jobs report

Federal Reserve Chair Janet Yellen remarked in last week’s Jackson Hole Economic Symposium that the case for a rate hike “has strengthened in recent months,” and that this was largely due to “solid performance of the labor market and our outlook for economic activity and inflation.” These remarks were followed shortly after by a televised appearance by Fed Vice Chair Stanley Fischer, in which he stated that Yellen’s speech was consistent with the possibility of a rate hike in September and potentially more than one rate hike by the end of 2016. This statement was tempered as usual, however, by the statement that “these are not things we know until we see the data.”

As a result of these relatively hawkish pronouncements, the market’s expectations of a Fed rate hike increased markedly and the dollar sharply extended its surge, pushing EUR/USD below the key 1.1200 level and back down around its 200-day moving average. Given that the labor market is a critical component of the Fed’s policy decisions, EUR/USD has the potential to move even lower with this Friday’s release of the Non-Farm Payrolls and unemployment reports for August. This is provided that Friday’s data follows the exceptionally noteworthy trend of the past two months of far exceeding prior consensus expectations. The current expectation is that the US added around 185,000 non-farm jobs in August. If the actual data on Friday once again exceeds these expectations, the probability of a September rate hike will very likely increase, the dollar should continue to strengthen, and EUR/USD could extend its current pullback even further.

From a technical perspective, EUR/USD has spent more than a week pulling back from key resistance imposed by the underside of a major bullish trend channel. That trend channel defined the currency pair’s uptrend from the 1.0500-area lows of last December up to the sharp breakdown of the channel when the Brexit outcome was revealed in late June. After having pulled back from resistance and dipping below the noted 1.1200 level, EUR/USD continues to be pressured by a strong dollar driven by a more hawkish Fed, as well as a relatively stagnant euro. With further downside momentum below the noted 200-day moving average, especially on a potentially better-than-expected jobs report on Friday, the next major short-term targets to the downside are around the key 1.1100 and 1.0950 support levels. 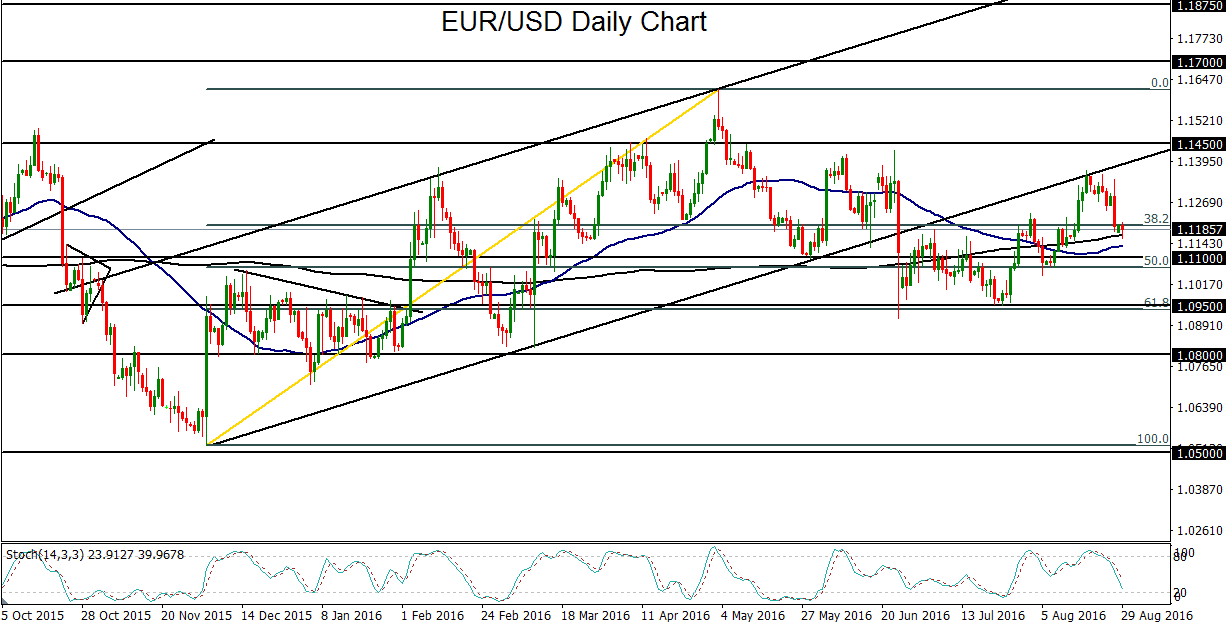