It might not be on every trader’s radar, but the EUR/CHF has reached its highest level since the Swiss National Bank’s decision to scrap its 1.20 floor in January 2015. At a good 1.1560, this once popular pair is now less than 450 pips from reaching 1.20 again. The EUR/CHF’s rise has been mainly attributable to a stronger euro this year than a weaker franc, although the latter has also underperformed in recent months. Thanks to an improving Eurozone economy and higher levels of inflation, the pressure has been growing on the European Central Bank to tighten its extra-ordinary loose monetary policy. This has put upward pressure on the shared currency. But unlike the Eurozone, there has been no signs of inflation in the Swiss economy. This has allowed the SNB to maintain an extremely loose monetary policy stance and active in the currency markets as it tries to put downward pressure on the franc.

Despite the EUR/CHF’s recovery after its sudden drop when the floor was removed, the franc still remains overvalued against the euro, according to the SNB. Although the central bank chose to change the wording from “significantly overvalued” to “highly valued” at its latest policy statement last week, the diverging policy stances of the ECB and SNB means that the EUR/CHF could still rise further in the coming weeks and months. An eventual return to 1.20 – which would effectively close that void left behind after the removal of the floor – would not come as surprise to us. The key risk to this outlook is if we see a sudden rise in risk aversion, say as a result of a stock market correction or some geopolitical event. This would undoubtedly boost the franc as it is deemed by many as a safe haven currency.

But for now the path of least resistance for the EUR/CHF is clearly to the upside. Indeed, with price breaking out to a new 2.5 year high, the chart is telling us that rates want to push further higher than lower. With that in mind, our next bullish objectives are at 1.1610/15 and 1.1705/10, the 127.2 and 161.8 per cent Fibonacci extension levels of the last (mini) correction. If after these targets are hit and depending how and when price gets there, the 1.20 handle could be the next key objective. Meanwhile the first area of support now is seen around 1.1500 to the 1.1537 area. But if the 1.1500 level breaks then we may see a deeper pullback before the uptrend resumes. A couple of longer-term support levels reside around 1.1200 and 1.1090. 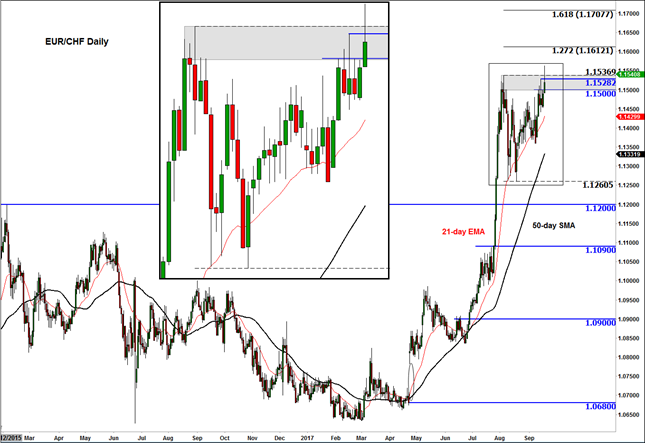