The SNB has been intervening to stem the franc’s rise, but so far, the intervention has been limited.

Our friends at Investopedia define a dead cat bounce as “a small, short-lived recovery in the price of a declining security…the name ‘dead cat bounce’ is based on the notion that even a dead cat will bounce if it falls far enough and fast enough.”

Morbid explanation aside, today’s price action suggests that yesterday’s “recovery” in risk appetite may be nothing more than a dead cat bounce. After recovering a bit less than half of Monday’s big selloff, US indices are once again testing 2-month lows; Oil prices didn’t even see a bounce and is trading down over 4% in midday US trade.

In the FX market, the safe haven Japanese yen and Swiss franc are once again the day’s strongest performers. Perhaps most importantly, as my colleague Fawad Razaqzada noted earlier today, China’s currency is weakening again following yesterday’s temporary respite. This exchange rate may be the most important market to watch in the coming days, as it serves as a proxy for the trade tensions between the US and China.

Amidst this backdrop, FX traders have been consistently selling EUR/CHF since the late April peak just below 1.1500, and yesterday's minor recovery increasingly looks like a textbook dead cat bounce. With yields on benchmark European bonds hitting record negative yields, the relative safety of Switzerland’s economy (the Swiss National Bank’s negative interest rates notwithstanding) is looking more and more attractive. 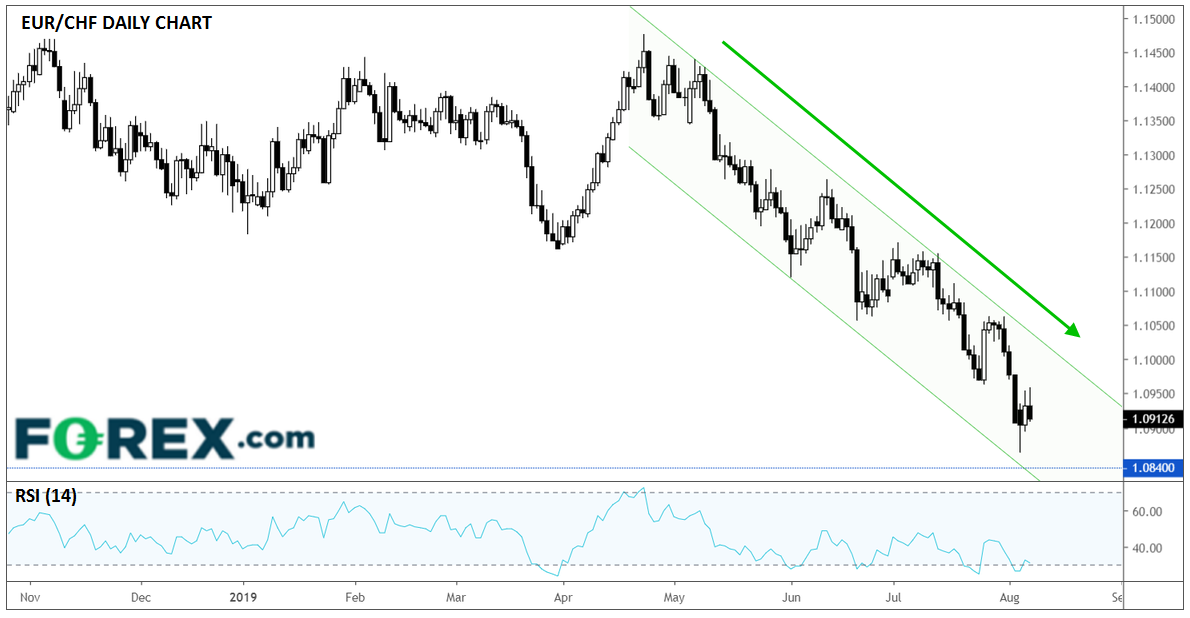 Of course, the SNB is reticent to see the franc strengthen too much against its most important trading partner. In recent weeks, the central bank’s sight deposits have ticked higher, suggesting that the SNB has been intervening to stem the franc’s rise, but so far, the intervention has been limited.

While it’s impossible to discern where the SNB’s threshold for more aggressive intervention sits, there is a key level of previous technical support near 1.0840 where sellers may look to take profit (or bottom-picking bulls could start to nibble on long positions).

One way or another, the risks to short EUR/CHF positions are growing after a 600-pip drop over the last couple of months.