The EUR/JPY is often considered to be a barometer for risk appetite. However it is not displaying those characteristics at all at the moment.

The EUR/JPY is often considered to be a barometer for risk appetite. However it is not displaying those characteristics at all at the moment. Today’s 1.4% drop in the German DAX index should have weighed heavily on this pair, but didn’t. This is a classic example of correlating markets going their separate ways. In this particular case, the culprit is the growing yield differential between German and Japanese debt. As German bunds sold off, so too did the stock markets, but the resulting higher yields supported the euro. As a result, all euro crosses rallied, including the EUR/JPY.

German bond yields have been rising sharply in recent days amid growing speculation that the European Central Bank may start tightening its policy in the coming months owing to an improving Eurozone economy and expectations of higher rates of inflation. In contrast to the ECB, the Bank of Japan continues to remain one of the most dovish central banks out there. The BOJ is aiming to create inflation by holding down bond yields, in order to encourage people to invest in the stock markets, which in turn is hoped to boost incomes from dividends and so on. The long and short of it is that money goes where interest rates are expected to rise. And right now, that is the Eurozone. This is why the euro is finding support.

As a result of today’s rally, the EUR/JPY has climbed to a fresh high for the year, achieving its best level since October 2015. The path of least resistance is clearly to the upside, so one should expect the dips to be supported until there is a break in market structure of higher highs and higher lows. Clearly a move back below 134.85, which was the point of origin of this latest rally, would be a bearish development. Until and unless that happens, the higher probability setups would be the bullish ones. With that in mind, the key support to watch now is at 136.00 on the daily time frame. This year’s earlier high of 136.60ish is also an important level to watch for possible signs of support around. Meanwhile, Fibonacci extension levels at 137.60 (127.2%) and 138.80 (161.8%) are among the bullish objectives to watch on the upside, along with round figures such as 137.00, 138.00 and so on. 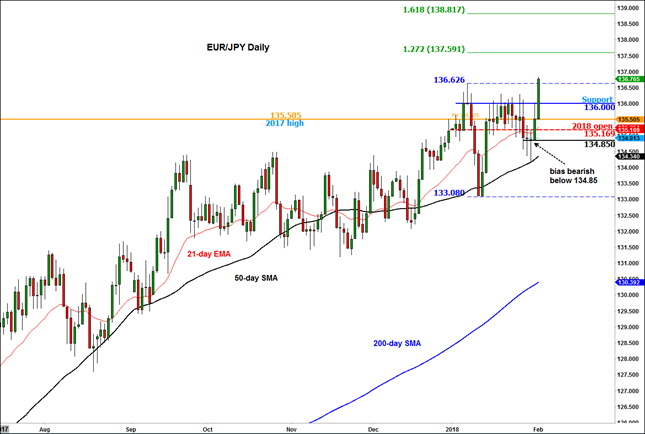