Euro's Close Could Be Key Post-NFP

Today’ close could be key EUR/USD as it meanders around a pivotal zone, where a close either side of it could be the difference between a breakout or a fakeout.

Today's close could be key EUR/USD as it meanders around a pivotal zone, where a close either side of it could be the difference between a breakout or a fakeout.

Whilst EUR/USD close to a 22-month low last week, it found support above 1.1100 and broke back above the original breakout level. We had noted the Euro appeared extended to the downside and whilst the rebound turned out to be deeper than expected, it was timely none the less. Still, as markets were too heavily positioned for a dovish FOMC meeting, the greenback has since regained its footing after printing an elongated bearish hammer on EUR/USD and USD/CHF reaffirm key support. This brings the potential for further downside. 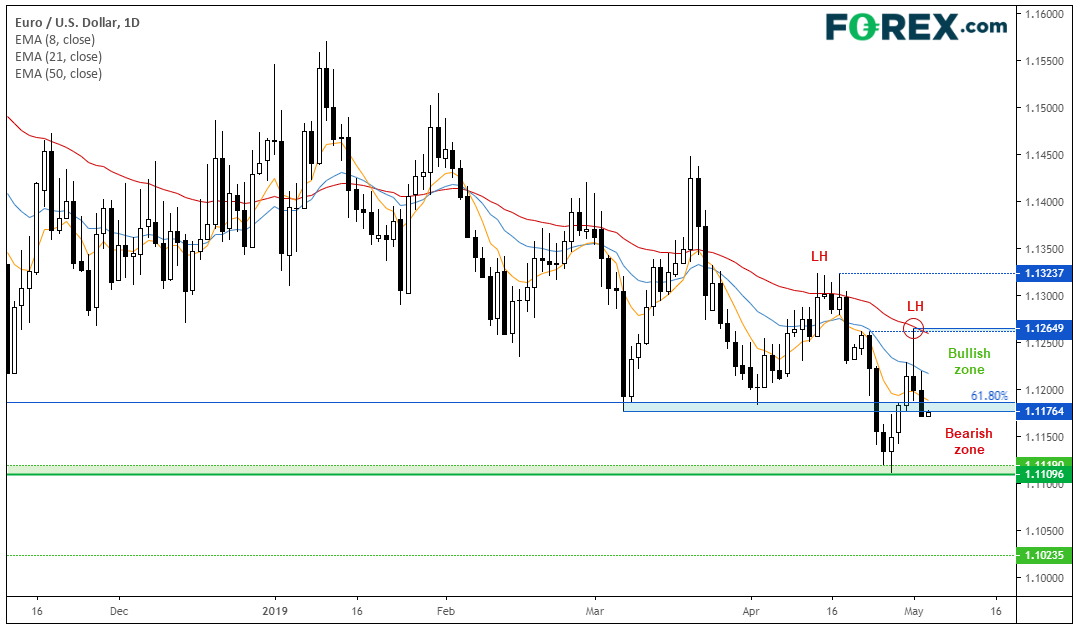 The bearish hammer formed a lower high and respected the 50-day eMA whist the 8 and 20-eMA's point lower and remain in 'bearish sequence'. Although whilst the bearish trend structure remain intact, today’s close today's close is key as it'll be the difference between a breakout or a fakeout as we head into a potentially volatile session.

Whilst today's NFP report is the clear headline data set for EUR/USD today, we also have European CPI and PMI data for the US to contend with, making the pair vulnerable to volatility and whipsaws around key support. If incoming data allows euro to rebound, there are a lot of shorts to cover at these levels with large speculators being their most bearish on EUR/USD since December 2016. But for now, all eyes are on today's data set and where it closes around the original breakout levels.