The euro has been able to extend its gains after the Catalan president suspended declaration of independence from Spain on Tuesday, in a confusing statement.

The euro has been able to extend its gains after the Catalan president suspended declaration of independence from Spain on Tuesday, in a confusing statement. Carles Puigdemont stopped short of making a full declaration of Catalonia’s immediate independence, but called for more dialogue with the Spanish government to resolve the situation peacefully. He proposed suspension of independence for “a few weeks.” In response, the Spanish Prime Minister, Mariano Rajoy, has demanded that the Catalonia government makes clear whether it considers itself independent or not. So, the uncertainty remains but the threat of an immediate independence has eased for now.

But does this necessarily mean the EUR/USD could rise further in the short-term? While I am tempted to say yes, let’s not forget the dollar. The US currency has been falling ever since Friday’s weaker-than-expected US jobs report was published. However it could make a comeback depending on this week’s fundamental events from the world’s largest economy.  The FOMC’s last meeting minutes will be published later on this evening, followed by PPI a day later. Friday will likely be the most important day of the week in terms of data as we will have the latest US CPI and retail sales, among a couple of other macro numbers, to look forward to. So, there’s the potential for a dollar comeback, if data permits.

The EUR/USD’s downtrend since early September when it failed to break through long-term resistance around the 1.2040/5 paused last Friday when a weaker US jobs report weighed on the dollar across the board. As a result, long-term support around the 1.1700/10 area held on a daily closing basis, leading to some bullish follow-through in the first half of this week. This 1.1700/10 level was the August 2015 high, marking the peak of the prior 2-year trading range. Once resistance, it has turned into support on several occasions now. But the EUR/USD has now returned to a key inflection point around 1.1825-50. This area was formerly support and corresponds with the low prior to the rally to that long-term resistance in the 1.2040s which ultimately failed. In addition, the now flatlining 50-day moving average comes in around this area, too. Thus, there are technical reasons why the EUR/USD may resume its downtrend from here. Alternatively, a clean break above here would be bullish.

In the event the EUR/USD goes lower from around this 1.1825-50 resistance zone, the first line of defence for the bulls and therefore the first bearish objective would be around 1.1755-75, an area which was formerly support and resistance.  Any potential breakdown below here could see price make a move towards 1.1700/10, and this time this key support level may also give way given the number of times it has already been tested. If so, this would confirm a change in the near-term trend to bearish. In this case, 1.1615 and 1.1555 would then become the next immediate bearish objectives.

Alternatively, if the EUR/USD breaks through the 1.1825-50 resistance zone then this could pave the way for a rise towards 1.1940 resistance next and possibly another re-test of that 1.2040 level. 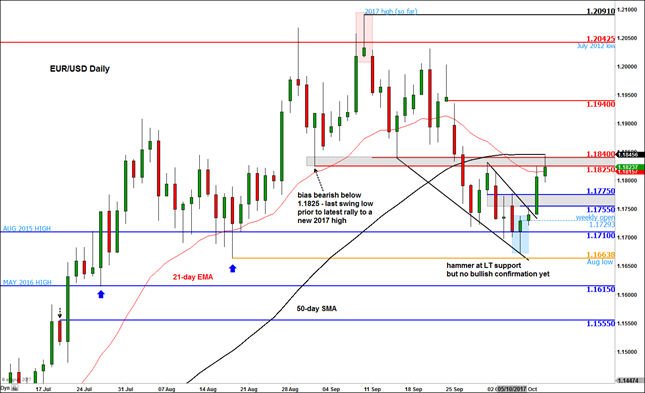