EUR/USD in focus ahead of ECB and FOMC

The EUR/USD could finally stage a breakout from its tight ranges with the key central bank meetings to look forward to over the next couple of weeks.

The EUR/USD fell noticeably on Friday as the dollar jumped after a couple of Fed officials talked down the prospects of a 50-basis point interest rate cut.  New York Fed President John Williams was forced to quickly clarify that he did not intend to suggest that the FOMC would be making a large interest rate cut at the FOMC’s upcoming meeting this month, while Boston Fed President Eric Rosengren went a step further by suggesting he does not see a rate cut as necessary as the economy “is quite strong” and is not yet showing signs that more central bank accommodation is needed. But as the new week gets under way the dollar is easing back again, with investors still fully expecting at a 25-basis point rate cut next week. However, there’ still more than a week left before the Fed decides on policy, so plenty of time for it to move around in the interim, especially against the likes of the pound and euro this week.

From the Eurozone, the latest PMI data (Wednesday) and German Ifo (Thursday morning) will be among this week’s key data releases which the European Central Bank might take into account when deciding on interest rates on Thursday. The ECB has been pushing out its rate hike expectations, but the markets will now be wondering whether the central bank will instead talk up the prospects of loosening – rather than tightening – its monetary policy, and soon. With the Fed set to cut rates, and other major central banks having already loosened their policies or turned dovish, the ECB could very well prepare the markets for more stimulus or even negative interest rates. The euro could drop sharply if that turns out to be the case, while if the ECB is not as dovish as many expect them to be then watch out for a short squeeze rally.

Ahead of the above fundamental events, the EUR/USD is finely balanced as it continues to trade within then ranges it has been stuck in for several months now. To approach the EUR/USD tactically, I have plotted a couple of scenarios on the daily chart below.

Conservative traders may therefore wish to wait for one of these key levels (1.1180-1.1200 support OR 1.12800 resistance) to break before deciding on a directional trade. The longer-term trend could be determined by the upcoming meetings of the ECB this week and FOMC next week. 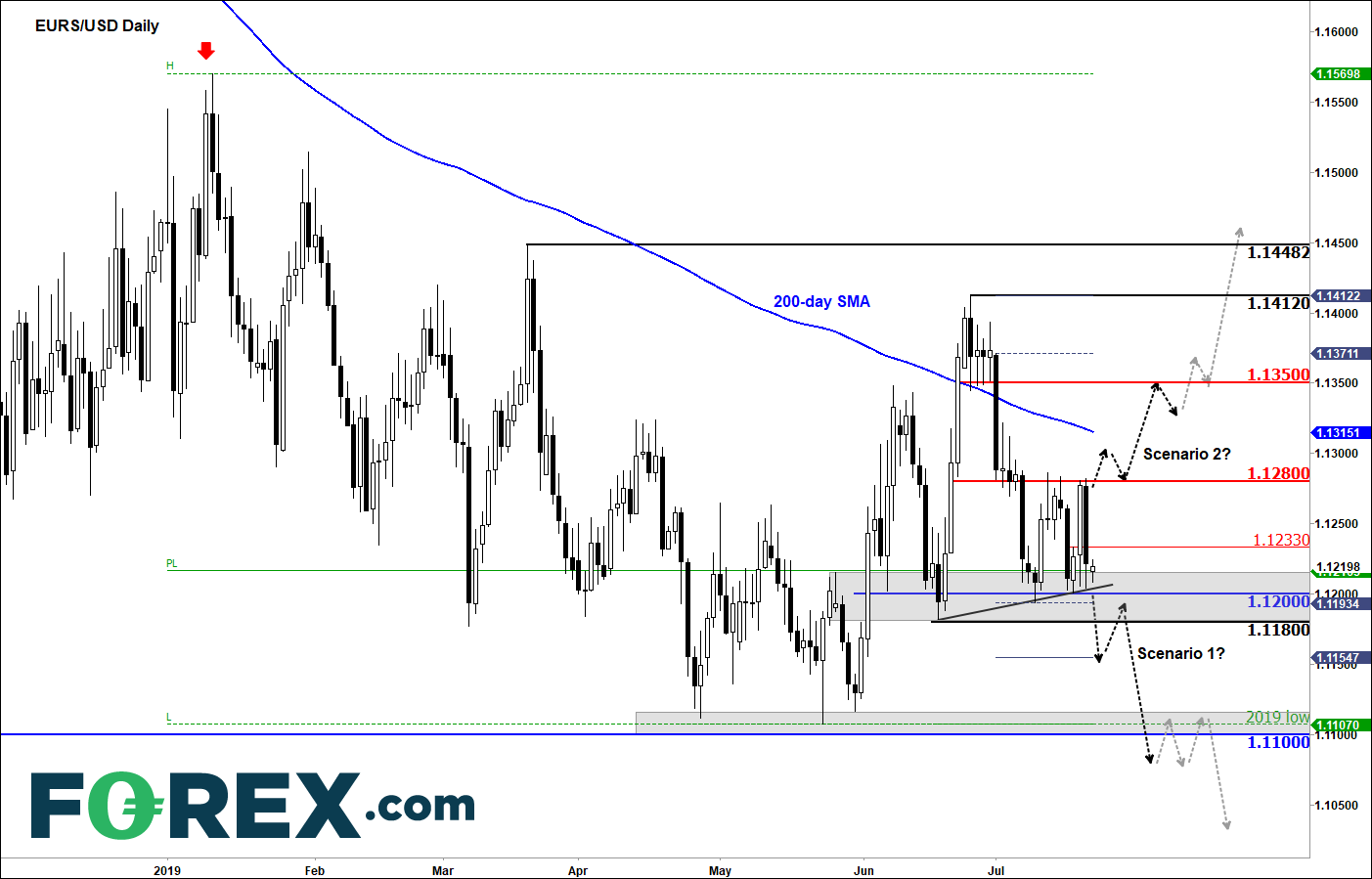