S&P 500: fatigued US stocks due a correction?

US equities have started the new trading week on a negative note, tracking the overnight losses seen in Europe and Asia. Investors don’t appear to be taking on much risk ahead of key US earnings, important economic data and a couple of central bank meetings this week. The drop in commodity prices like copper and oil are also holding back some stocks.  Things could look and feel a lot different once investors digest some US earnings and data later on in the week. But right now, the markets do appear a little fatigued and a correction of some sort would not come as a surprise to me.

Indeed, that is exactly what the daily chart of the S&P 500, below, is pointing to. After the index broke to new unchartered territories back in July following a 1.5-year consolidation, one would have expected to see some strong follow-though in the upward direction. Instead, it had a bit of an anti-climax feeling to it. A new record high was achieved at 2198/4 in mid-August but since then the S&P has been trading in a range, mostly lower. The S&P has dropped to test the point of origin of the breakout at 2120 and the prior record high of 2134/5 several times now. So far, the buyers have stepped in, as you would expect, to push the market back into the range. However the bounces have been shallower each time. Now the more a level is tested, the more likely it is that it will break in the direction of the test. So, if the S&P were to test the 2120 support level again, it may fail to bounce this time. If so, a sharp withdrawal of bids may be the outcome, and mostly likely some fresh selling, too. The bears will be encouraged by the fact that a bullish trend line has now been eroded while the 21-day exponential moving average has crossed below the 50-day simple moving average. This is a clear warning sign for the bulls.

For now though, the bulls are still hanging in there and in the short-term they will be content for as long as the 2120 level holds on a daily closing basis. The slightly longer-term focused bulls will be happy for as long as the S&P remains above the rising 200-day moving average, which comes in at just shy of 2070. But there is a bit of a room between where we are at the moment and the 200 MA. So could the sellers take us down to that level? At this point, a closing break above the 2145 resistance (old support) level would tip the balance back in bulls’ favour. In this potential scenario, the odds that we will see new record highs would dramatically increase in my view. 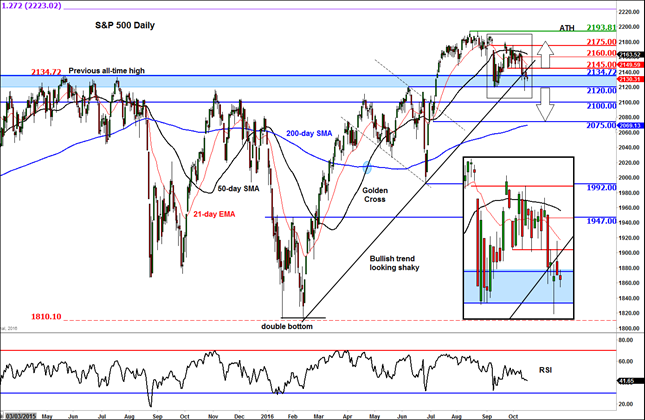