When it comes to the FX market, the Fed will always have its biggest influence on the US dollar...

More than a year on from the first (reported) COVID-19 case in the US, the world’s largest economy remains on thin ice. Despite optimism around multiple highly-effective vaccines, initial unemployment claims have ticked up in recent weeks, and countless businesses are struggling to hold on amidst government-mandated shutdowns until the economy can start to “return to normal” in the second half of the year.

Against this backdrop, the Federal Reserve’s decision is clear: Continue to offer maximum stimulus, with large ongoing asset purchases and interest rates at 0%. Previous hints of tapering asset purchases (“quantitative easing”) have been walked back in recent days, with officials opting indicating that they’d like to see “substantial further progress” toward the central bank’s dual mandate, 2% average inflation and maximum employment.

In terms of changes for this year, it is notable that Christopher Waller, who was sworn in by the Board of Governors last month, will vote in his first FOMC meeting this year. Between Waller and the normal yearly rotation between regional Fed Presidents, the 2021 voters are on track to have a slightly more dovish tilt this year, though it’s unlikely that the central bank would be tightening policy meaningfully this year regardless.

Following the December release of the Fed’s Summary of Economic Projections (SEP), the policymaking body will not be releasing updated economic forecasts until March. This means that traders will key in on Fed Chairman Jerome Powell’s press conference more than usual, with the Chairman likely to voice support for expanded fiscal stimulus and emphasize the downside risks to the near-term economic outlook, even if he remains cautiously optimistic over the longer-term prospects.

When it comes to the FX market, the Fed will always have its biggest influence on the US dollar. Though no meaningful changes are expected to monetary policy for months, the central bank’s economic outlook for the year, along with any details on how Powell and company intend to eventually wind down the current unprecedented stimulus, could lead to short-term volatility in the US dollar.

Looking at the USD/JPY pairing, rates remain in a clear bearish channel dating back to Q2 2020. More recently, the pair has spent the last two weeks consolidating in the upper-103.00s after the early January spike. With the bearish channel intact and longer-term moving averages capping prices of late, the path of least resistance for USD/JPY remains to the downside. A break of last week’s low near 103.35 could clear the way for the unit to retest its post-pandemic low around 102.60 heading into February: 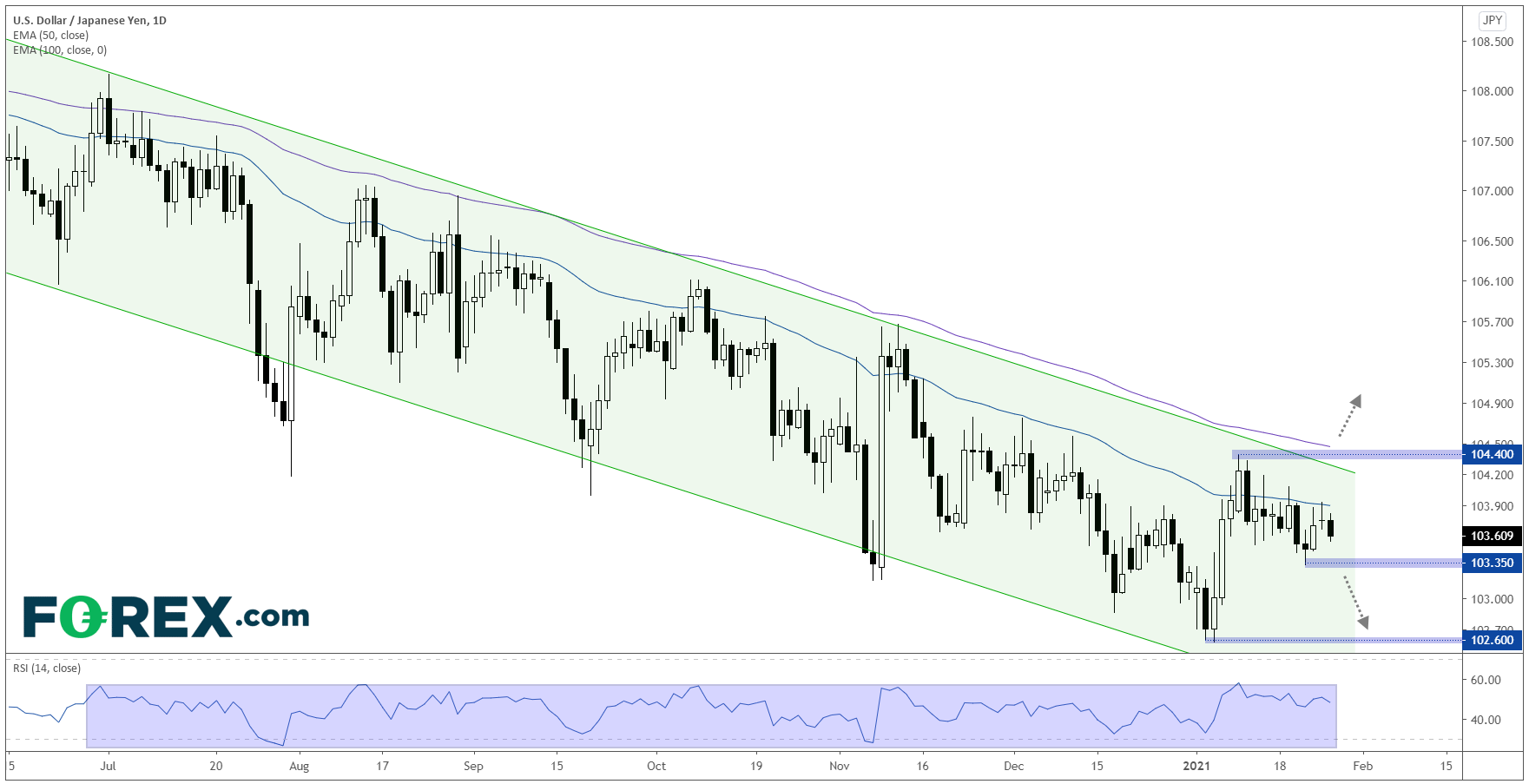 Meanwhile, a bullish breakout above 104.40 would be needed to erase the bearish bias; such a move would be seen as stronger if the pair’s 14-day RSI is able to break above the 60 level which has capped every rally for the last eight months.