In this week’s edition, we discuss the euro amid recession worries and review the yen and franc after last week’s policy decisions from BoJ and SNB

Welcome to Forex Friday, a weekly report in which we discuss selected currency themes mainly from a macro viewpoint, but we also throw in a pinch of technical analysis here and there.

In this week’s edition, we discuss the euro – following the release of more negative data from the Eurozone and ahead of more German data next week – and follow up on Japanese yen and Swiss franc after the previous week’s central bank surprises.

The euro fell back to the $1.05 handle following the release of more bad data from Eurozone this week. The soft PMI data form Thursday further cemented expectations the Eurozone is heading for a recession, causing European stock markets to underperform Wall Street. Though EU stocks rebounded on Friday, this is probably due to short covering amid the lack of any fresh macro drivers.

Adding to recession worries, we saw the German Ifo Business Climate index come in a touch weaker this morning. All in all, it has been another week full of bad data for the Eurozone: 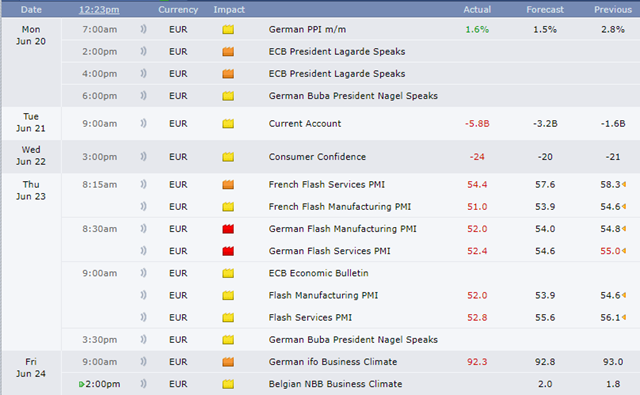 In the week ahead, we will have plenty of more German data, with Retail Sales (Monday), GfK Consumer Climate (Tuesday), CPI (Wednesday) and Unemployment Change (Thursday) all to look forward to. In addition, ECB President Lagarde is due to speak on a couple of occasions, while Eurozone CPI and final PMIs for June will be published on Friday.

EUR/CHF closes in on parity

Weak growth, sky-high energy prices and surging inflation all point to stagflation and thus continued weakness for the euro. While it remains to be seen whether the EUR/USD will drop to 1.00 as a few cracks are also starting to appear in the US economy, there’s another euro cross that looks destined for parity: EUR/CHF. 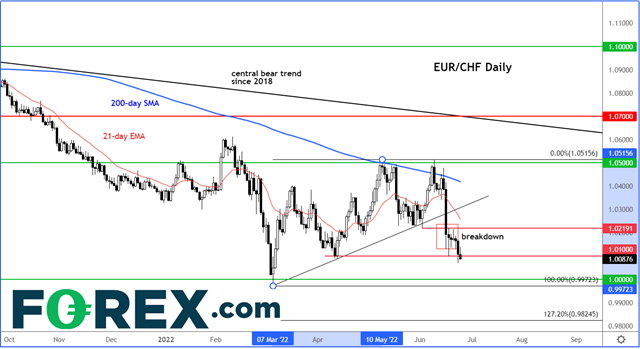 After the SNB’s surprise 50 bp hike and euro’s ongoing woes, the path of least resistance remains to the downside for the EUR/CHF.

From a technical perspective, the EUR/CHF’s recent breakdown of the rising trend line and support at 1.0220 and now at 1.0100 means we are very close to reaching parity soon. Could it happen before the week is out?

Following this week’s slight drop in global bond yields, the yen has found some much needed support. The Bank of Japan last week reaffirmed its commitment to its current loose policy, making it the only major central bank to still remain dovish.  However, that’s not to say the markets aren’t asking any questions. The BOJ remains pressure on its yield curve control policy. The yield on 10-year JGBs is continuing to test the BoJ’s resolve, trying to break the 0.25% ceiling. Bond yields with different maturities that are not being targeted by the central bank are rising along with global yields. Could the BOJ be forced to drop its YCC? That’s the single biggest risk for the yen short trades right now.  Given the not-so-hot CPI numbers that were released from Japan on Friday, it is difficult to see the BoJ call an emergency meeting until its next scheduled meeting on July 20-21. Japan’s closely-watched core CPI measure of inflation remained at 2.1% for a second month.

Despite the slight strength of the yen this week, the currency is likely to remain supported on the dips because of the BoJ’s current policy stance. Among the Japanese yen crosses, the CHF/JPY remains the strongest with a solid macro backdrop. Remember, the SNB’s policy decision last week was supposed to be a side-show sandwiched between the FOMC and the BOE. However, it stole the spotlight, as it hiked interest rates for the first time since 2007 not just by 25bps, but by 50bps and didn’t rule out that there could be more interest rate increases to come.  The fact that the SNB also said that the franc is no longer overvalued, we saw a sharp rally in CHF across the board.

Naturally, one of the currency pairs to watch following the divergence of monetary policies of the two central banks is the CHF/JPY. This pair had already been trending higher but following last week’s action, it has broken and now trying to establish a base above the 140.00 handle. How high could it go? 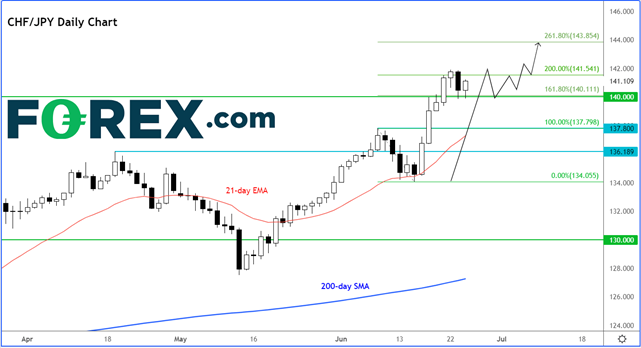