FTSE slips with pound, UK data and Syria in focus

The US-led strikes against Syria turned out to be a non-event as far the markets are concerned and fortunately there were no reports of casualties.

The US-led strikes against Syria turned out to be a non-event as far the markets are concerned and fortunately there were no reports of casualties. Only 3 targets were hit and the wave of strike action has already been declared to be over – at least for the time being, anyway. However, investors still remain wary of the potential for tensions to escalate between Russia and the West. The US’s Ambassador to the United Nations, Nikki Haley, has announced that the Trump administration will introduce more sanctions against Russia, possibly as soon as today. Russia has already reacted angrily to the Syrian strikes, although so far it hasn’t retaliated. Meanwhile US President Donald Trump has warned that the US is "locked and loaded" to strike again if the Syrian government carries out more chemical attacks. In the UK, Prime Minister Theresa May has come under scrutiny about the legality of Saturday’s attack, with the opposition Labour party saying the air strikes were not legal and that the government should have consulted the parliament before the military action.

But investors are trying to move on and fortunately there are lots of macro events to divert the attention away from Syria this week. That being said, US data is light with today’s release of retail sales being the main event. But outside of the US, there will be plenty of data to look forward to. On Tuesday, for example, we will have the latest Chinese GDP estimate and UK average earnings index. Wednesday will see the release of UK CPI and the Bank of Canada’ latest monetary policy decision. The early part of Thursday’s session will be dominated by data from the antipodean nations as New Zealand CPI and Australian employment data are published then, followed later by more data from the UK – this time retail sales. Finally, Friday will see the release of Canadian CPI and retail sales data.

Given the ongoing situation between Russia and the West, and key upcoming company earnings results, equity markets will remain in focus over the coming weeks. Among the major indices, the UK’s FTSE 100 is among those that needs to be monitored closely this week due to the importance of the upcoming UK data. The benchmark stock index is down, held back by sharp falls in shares of WPP and Sage Group. The FTSE’s inverse relationship with the pound suggests the firmer currency is also having a negative impact. Thus, it might be ideal for the FTSE if this week’s UK data were to disappoint, as this may weigh on the pound and lower expectations about the possibility of aggressive tightening from the Bank of England.

From a technical perspective, the FTSE’s three week winning streak has reduced the bears’ control and with key long-term support at 7100 having been reclaimed, the bulls may have the upper hand again, despite today’s weakness. The key short-term support level that needs to be defended now is at 7210. If this level gives way then there’s nothing significant until that 7100 handle. In terms of resistance, the key hurdle is between the 7275-7325 range. This area was previously support and resistance. If the index were to climb above here in the coming days then this may pave the way for a run towards the next resistance at 7435, which, as well as a previous support level, marks the 61.8% Fibonacci retracement against the most recent swing high. 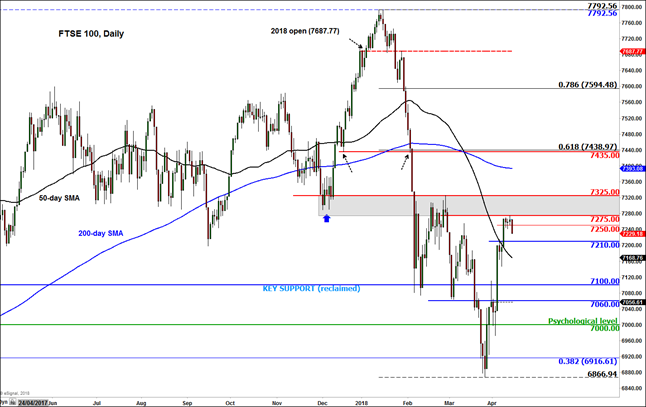