Futures traders load up on AUD longs (despite falling prices)

With prices falling whilst futures traders increase their bullish exposure to the Australian dollar, we’re keen to see if it can hold above 0.73 and form a countertrend bounce.

Whilst there had been some excitement of an imminent RBA, those hopes have receded with markets pricing in just a 22% chance of an RBA hike at their May meeting. And that may still be quite high considering Australia’s federal election is on the 21st of May, and the RBA are known to not want to be seen ‘getting political with their policy’ in the run-up to an election.

The interbank cash rate futures curve has fully priced in a 15-bps hike at their June meeting and places a 60% chance of a 25-bps hike in July or 75% chance of it in August. Yet by October rates are expected to be at 1.25% and at 2% by January 2023. For the RBA this is quite hawkish. Yet there’s a decent chance that the Fed will raise rates to 3% before the RBA move to 2%, and that has helped keep pressure on AUD/USD these past two weeks and drag it down to a 1-month low.

There are some concerns the Fed may tip the US into a recession as they try to tame their runaway inflation, and that could see markets reprice the probability of much higher rates as the year develops. Commodities remain a supporting feature for AUD, and its -4% pullback is headed for a key area of support.

The month of May arrived early for AUD

Over the past 30 years, the Australian dollar has averaged a 0.95% in April and closed higher 63.3% of the time. However, the month of May tends to be bearish for the Aussie with an average return of -1.14% with bearish monthly closes forming 66.7% of the time. Given the Aussie has fallen around -4% from this month’s high already, it appears that May has come early. But with futures traders increasing their long exposure as AUD heads towards a key support level, we see the potential for a corrective bounce at the very least.

Futures traders are increasing their long-exposure to AUD

Over the past three weeks large speculators have added 16k long contracts, 4.9k of which was just last week. Although the rise in bullish bets really began at the beginning of March. Bears trimmed their short exposure over the past two weeks, which has helped reduce net-short exposure to AUD futures to the lowest level since July. Ultimately this all means that futures traders are increasing their bullish exposure on the Aussie despite prices moving lower. 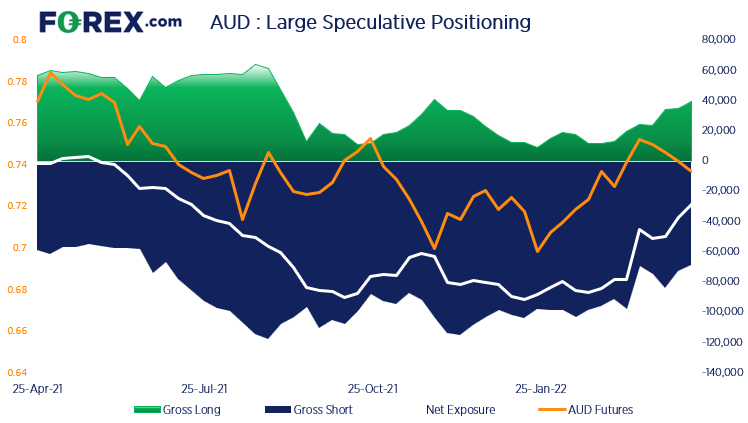 AUD/USD has fallen from the April high in a relatively straight line. Yet it is headed for a key zone of support just above 0.7300 which comprises of a bullish trendline, the 200-day SMA and 200-day EMA. RSI (2) touched its lowest level this year on Friday of 3.5 which increases the odds of a near-term inflection point. Yet with futures traders loading up on longs into support, and AUD already taken a -4% pullback to current levels, we believe the asymmetric trade is to the long side whilst prices hold above 0.7300. 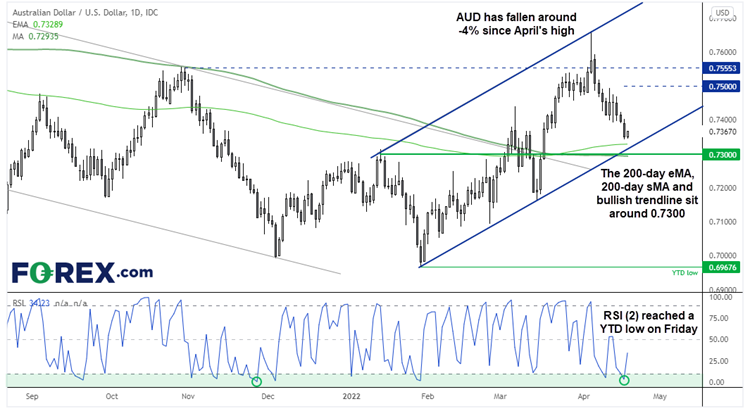 Bulls could consider entering around current levels and use a break below 0.7300 that the move lower is not yet complete. Alternatively, bulls could seek for dips above 0.7300 to improve the potential reward to risk ratio. The initial target is the highs just below 0.7500, with a move to 0.7550 or even 0.7600 being a nice surprise and likely pointing to something more significant than a countertrend bounce.
TAGS:
AUD forex FX Monthly Trade Market Sentiment Trade Ideas
Share: