Stocks reversed gains on Tuesday afternoon after having rallied in the morning. The morning rally was largely due to investors’ hopes for more central bank stimulus after China posted its slowest economic growth in years.

As global stocks pared gains, the Japanese yen, which had been losing traction due to the morning’s tentative stability in equities, began to rise in the afternoon as a risk-off sentiment took hold once again.

Also on Tuesday, Bank of England (BoE) Governor Mark Carney commented in a speech that there was no set timetable for hiking interest rates in the UK. This further added to the existing doubt surrounding the BoE’s monetary policy stance, and helped prompt the already-besieged British pound to plunge even further.

This combination of a falling pound and a late-rising yen pushed GBP/JPY back down to re-approach the key 166.00 support level, its lowest level in nearly two years. Prior to hitting this level, the currency pair had already been falling precipitously since early December, breaking down below progressively lower key support levels, including 180.50, 176.00, 173.50, and most recently, the 169.00 level.

As global economic concerns and low inflation continue to weigh on the Bank of England’s long-awaited intentions of raising interest rates, and bouts of equity market volatility continue to direct asset flows back towards the yen, GBP/JPY could have significantly more room to fall. On any sustained breakdown below the noted 166.00 support level, the next major downside targets are at the key 164.00 and then 160.00 support levels. 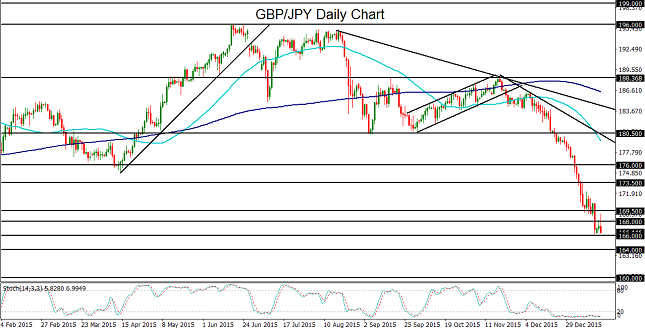