This week’s sheer number of top-tier economic data from the UK economy means the focus will be on sterling, which has been pounded recently because of receding expectations about a Bank of England rate rise this year. In fact, as my colleague Matt Weller reported earlier, contrary to economists’ expectations of a rate rise, traders have actually started to expect a rate cut as the more likely scenario. Their conviction is only likely to grow should this week’s UK macroeconomic data disappoint expectations. Indeed, given the current sentiment and the so-called "Brexit" risks, it would probably require some significantly stronger data to change the market’s perception, which appears unlikely. So, while there is a possibility for a respite in the selling pressure, things could go from bad to worse for the pound, especially against currencies where the central bank is more hawkish, such the Australian and New Zealand dollars. Both the RBA and RBNZ appear content with the recent weakness of their respective currencies and also the current level of interest rates. In New Zeeland, interest rates are significantly higher at 2.5% than most other developed nations. The GBP/NZD could therefore weaken a lot further over the long term outlook if the disparity between the RBNZ and BoE’s policies grow. In the very short-term outlook, the GBP/NZD could also suffer if (1) UK’s data disappoints and/or (2) macro pointers from New Zealand beat expectations this week. Otherwise, a short-term relief rally could be on the cards.

From a technical point of view, the outlook for the /NZD looks bearish as things stand. The volatile currency cross currently resides inside a bearish channel and is also below both its 50- and 200-day moving averages, which are now in the "wrong" order. The only potential bullish technical indication is the positive divergence on the RSI, which has formed a higher low when the /NZD was unable to break below its long-term 50% retracement level and the December 2015 low of 2.1500 last week. This suggests that the selling pressure has been weakening in recent days, which is not a major surprise ahead of this week’s data from both the UK and New Zealand economies. But despite the bullish divergence, the RSI is holding below its own bearish trend line. So, one should not read too much into this indicator on this occasion.

In the event of a break below the 2.1500 support level, there are not much further short-term reference points seen until 2.1000, which was formerly resistance.  So, there’s scope for a sharp drop in the GBP/NZD this week. Below 2.1000, the next potential bearish target could be the 61.8% Fibonacci retracement of the entire 2013-15 upswing, at 2.0575, or even the lower trend of the bearish channel and psychological at 2.0000.

On the other hand, a decisive break above the resistance trend of the bearish channel and the 50-day moving around 2.0230 could pave the way for a sharp rally. The GBP/NZD’s next move above 2.0230 would then depend on what it will do around the key resistance area between 2.2300 and 2.24500. But as things stand, the more likely outcome is a breakdown than a breakout. 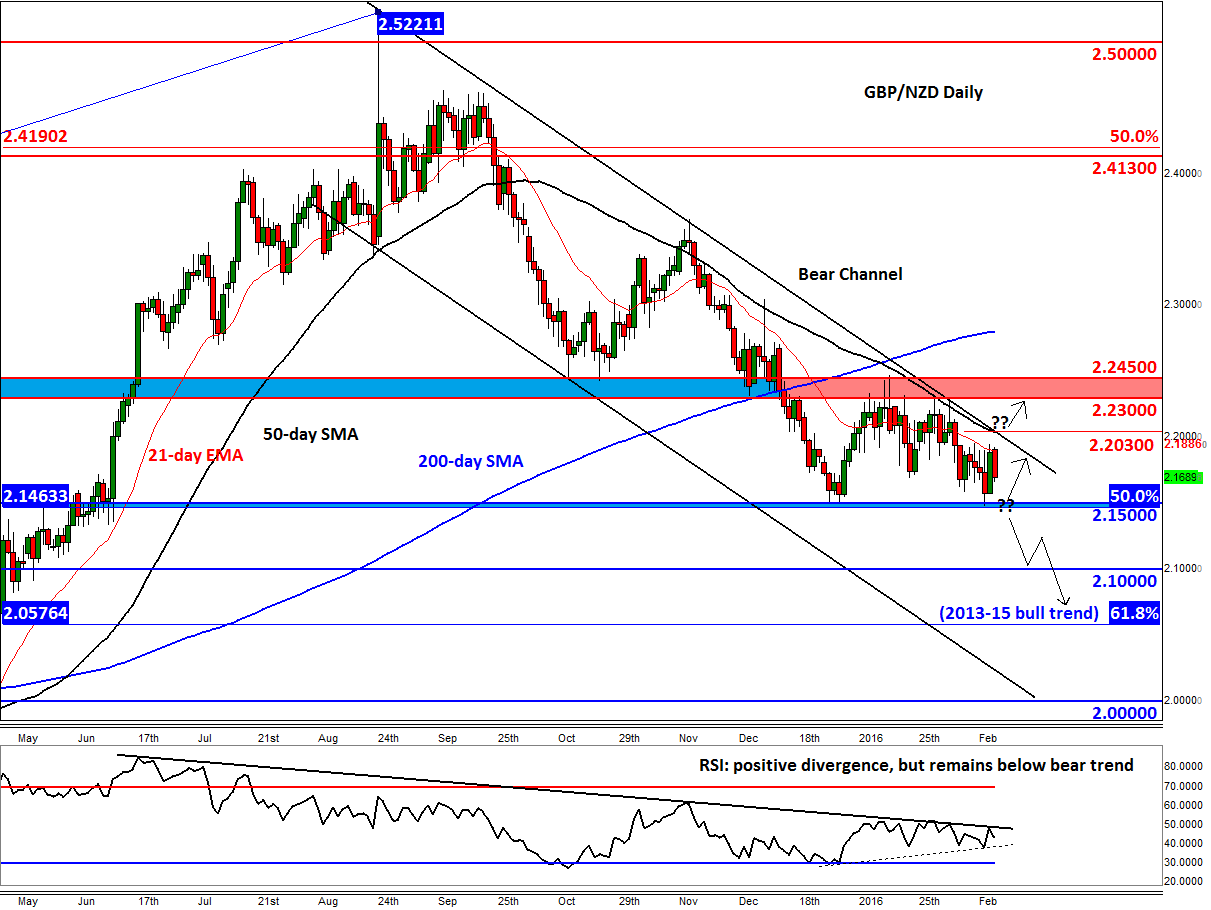