With the US dollar mostly flat or mixed against other major currencies on Wednesday, the British pound once again took center stage as it extended its plunge due to increasing fears over the ramifications of a potential UK exit from the European Union, or Brexit.

Sterling fell against the dollar, euro, yen, and others, to extend its recent losses after British multinational bank, HSBC, issued a stern warning on Wednesday that a Brexit would damage UK economic growth substantially and potentially result in another 20% drop in the pound’s value against the dollar.

Though the vote is not scheduled until early summer, speculation over the potentially severe consequences of an actual UK exit of the EU has increasingly weighed on the pound, especially since the June 23rd referendum date to vote on EU membership was confirmed over this past weekend.

Wednesday’s extension of GBP/USD’s recent plunge resulted in a breakdown below major support around the psychologically-significant 1.4000 level, establishing nearly a seven-year low under 1.3900 in the process. This confirms a continuation of the longstanding bearish trend for the currency pair.

Although GBP/USD is technically oversold after such sharp and prolonged declines recently, and some semblance of a relief rebound may be forthcoming, both the overall fundamental outlook as well as the longer-term price momentum are currently pointing to the downside. Of course, this could change if near-future developments start to indicate a lower likelihood of a Brexit.

With GBP/USD having fallen sharply since mid-February, and especially with Wednesday’s noted breakdown below previous support at 1.4000, the currency pair is currently eyeing a key downside support objective at the 1.3500 level. That support level represents the major long-term low established in the beginning of 2009. 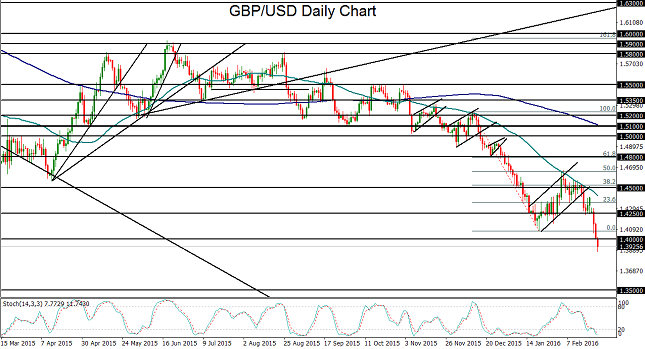