<p>The Bank of England (BoE) issued its official bank rate, monetary policy summary, and quarterly inflation report early on Thursday. The votes of the BoE Monetary Policy Committee’s nine members were unanimous in keeping the key benchmark interest rate steady at a record low 0.5%, as widely expected. Despite expectations having been met with respect to unchanged interest rates, three major themes stood out in the central bank’s comments on Thursday: 1) economic growth forecasts were cut, 2) inflation forecasts were raised, and 3) the BoE’s Brexit concerns are serious and mounting.</p>

The Bank of England (BoE) issued its official bank rate, monetary policy summary, and quarterly inflation report early on Thursday. The votes of the BoE Monetary Policy Committee’s nine members were unanimous in keeping the key benchmark interest rate steady at a record low 0.5%, as widely expected. Despite expectations having been met with respect to unchanged interest rates, three major themes stood out in the central bank’s comments on Thursday: 1) economic growth forecasts were cut, 2) inflation forecasts were raised, and 3) the BoE’s Brexit concerns are serious and mounting.

The GDP forecasts for 2016, 2017, and 2018 were all cut, with the 2016 forecast now at 2% from prior estimates of 2.2%. Meanwhile, the inflation forecast has risen to 2.1% by Q2 of 2018, which is above the BoE’s target inflation rate. Finally, the central bank provided a dire warning of negative consequences to the UK’s economy and currency that would likely stem from a Brexit, or a UK exit of the European Union, which will be voted upon in a late-June referendum.

Sterling rose in the immediate aftermath of the BoE’s announcements as currency traders focused more on the higher inflation forecasts and the absence of any mention or votes in favor of a potential interest rate cut. Despite this bounce, however, the fundamental picture for the pound continues to be fraught with substantial risk, especially with the June EU referendum looming only several weeks away. Pressures on the pound should continue to mount in the run-up to that Brexit vote.

From a technical perspective, GBP/USD continues to trade between its key 200-day moving average to the upside and the 50-day moving average to the downside. Both moving averages also continue to show a bearish trend bias. For more than a week, the currency pair has been falling from its early March high that approached the 1.4800 level. Price fell from that level as it turned down from key resistance imposed by the noted 200-day moving average and a key downtrend line extending back to the highs of last August. Thursday’s BoE statements prompted GBP/USD to rise briefly above the 1.4500 resistance level before later paring its gains and returning back below that level.

If the currency pair continues to trade under 1.4500, continued pressure on the pound could lead to a resumption of the long-term downtrend. With any breakdown below the noted 50-day moving average, the next major downside targets potentially reside around the 1.4250 support/resistance area followed by the key 1.4000 psychological support level, with February’s multi-year low of 1.3835 not far below that. 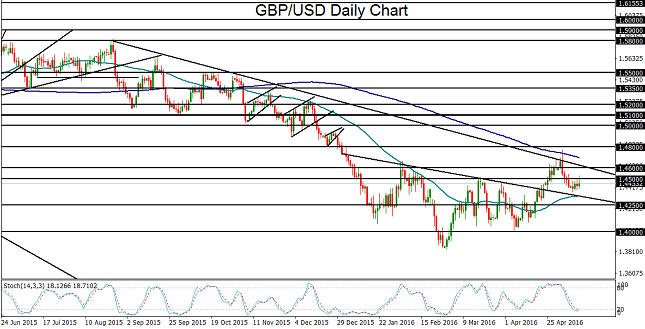