GBP/USD rallies but US data, BoE may throw the spanner in the works

So weak has the dollar been this week that even the GBP/USD has managed to regain its poise. Clearly, traders are no longer expecting the US Federal Reserve to embark on an aggressive tightening cycle after the central bank had hinted in December at several more interest rate rises when it increased rates for the first time since 2006. Since December, concerns have increased over the US economic outlook while worries over China have also intensified. Added to this, the stock markets have plunged, further diminishing the wealth effect phenomenon that the Fed had hoped would boost growth. The renewed selling pressure in the oil market has further weakened the outlook for inflation. So, there is less urgency for the Fed to raise interest rates again, especially given the fact that the European Central Bank has turned even more dovish and after the Bank of Japan cut rates into the negative. But this view could change somewhat if this week’s key US macro pointers exceed expectations by a meaningful margin. Today’s ADP private sector payrolls report and the employment component of the ISM Services PMI should provide a good indication for the official jobs data on Friday.

Meanwhile the latest UK macro data has been mixed this week, with construction PMI moderating to a still-healthy 55.0 in January from 57.8 in December, while the manufacturing (52.9) and services (55.6) sector PMIs both increasing slightly. Consequently, the GBP/USD has managed to regain its poise. But the Bank of England could throw the spanner in the works again on ‘Super Thursday’. On this day, the BoE will make a decision on interest rates, release the MPC meeting minutes, deliver the quarterly Inflation Report and Governor Mark Carney will hold a press conference. No one is expecting the Bank to make any changes to monetary policy, but the latest inflation forecasts should shed some light into the path of UK interest rates nonetheless. With oil prices remaining stubbornly low and most major central banks dovish, the BoE will be in no rush to signal its intention to raise rates any time soon. Thus the pound could get pounded once again on Thursday.

As a result of mainly weaker US dollar and the slightly stronger UK data, the GBP/USD has managed to rise above the recent range highs of around 1.4450/60, potentially paving the way for a rally towards the old support and 2015 low of 1.4565. Should we get there, this level will be pivotal as far as what the Cable will do next; a decisive break above it could lead to a more profound recovery, while a rejection here and the currency pair could drop back to the 1.40-1.42 region once more, which is a long-term support area. If the GBP/USD does manage to rise further then keep an eye on the 50-day moving average at 1.4820 or the Fibonacci retracement levels as shown on the chart for potential resistance. Meanwhile if it falls back below the 1.4450/60 support level without even testing the 1.4565 resistance then this would bode ill for the bulls. The RSI meanwhile has broken its bearish trend, but is yet to climb back above the 60 level in order to signal a significant change in momentum. So the Cable is not out of woods just yet. 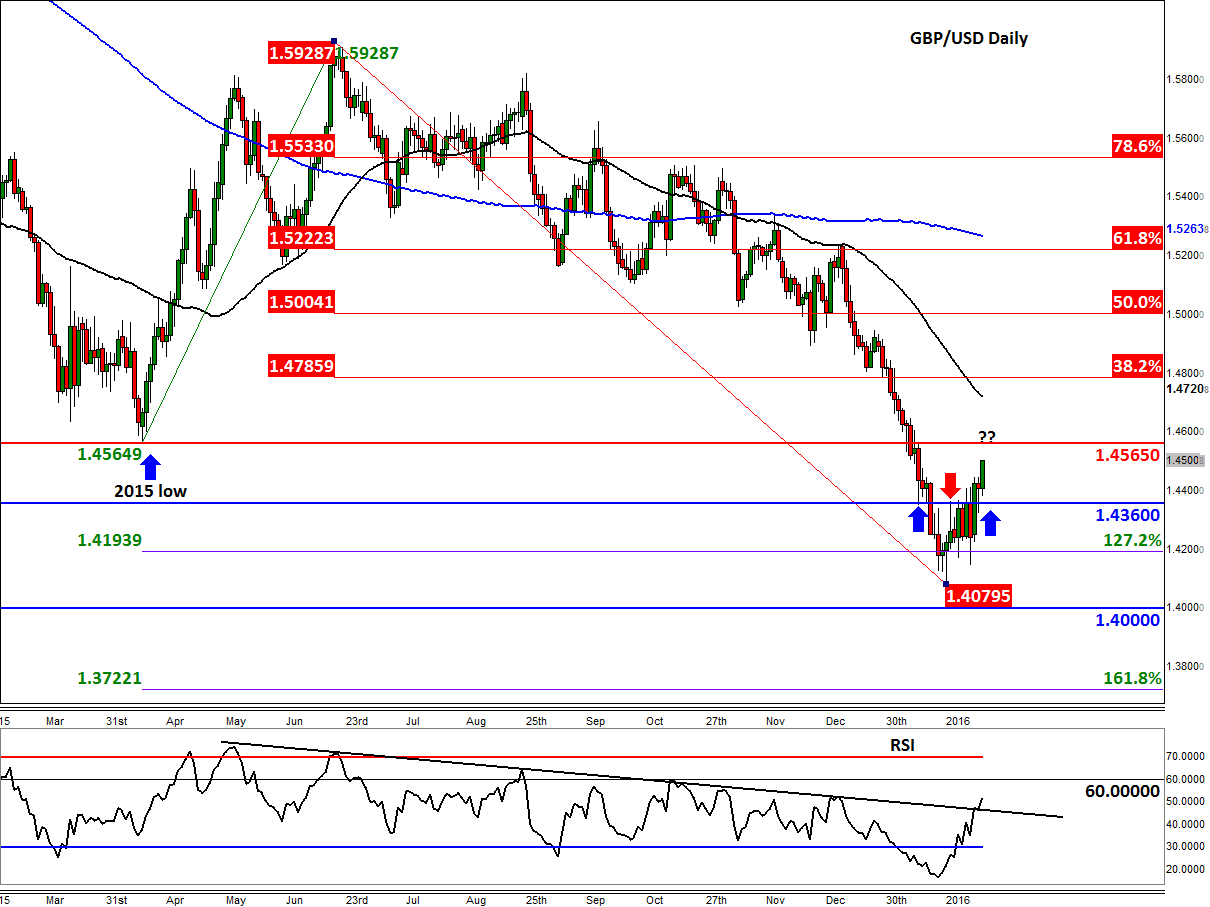