<p>GBP/USD spent last week rising sharply in a rebound from its new 7-year low up to major resistance around the 1.4250 level. This rise occurred as the US dollar fell and worries about a potential UK exit of the European Union (Brexit) partially subsided.</p>

GBP/USD spent last week rising sharply in a rebound from its new 7-year low up to major resistance around the 1.4250 level. This rise occurred as the US dollar fell and worries about a potential UK exit of the European Union (Brexit) partially subsided.

To start the new week on Monday, the dollar initially rose, prompting a GBP/USD turn back down from that 1.4250 resistance. By Monday afternoon, however, the dollar retreated once again, pushing GBP/USD back up to resistance and marginally above it.

From a technical perspective, the currency pair continues as of this writing to trade under its 50-day moving average, despite this past week’s rebound, and remains entrenched within a strong bearish trend. Going forward, pressure on the pound should likely be maintained with the June Brexit referendum drawing closer on the medium-term horizon and a consistently dovish Bank of England disinclined to raise interest rates any time soon.

On the US dollar side of the currency pair, while the greenback persists in vacillating on constantly shifting expectations of another Federal Reserve rate hike, further monetary tightening this year in the US still remains a distinct possibility. This possibility generally continues to support the dollar against other major currencies that are driven by even more dovish central banks, including sterling and the Bank of England.

For these reasons, GBP/USD continues to face headwinds going forward, despite the current rebound. As long as the currency pair returns below the noted 1.4250 resistance level and remains trading under its 50-day moving average, the key downside target continues to be at the 1.4000 psychological support level. With any sustained re-break below that 1.4000 level, the next major downside target remains at the key 1.3500 support level, last hit in early 2009. 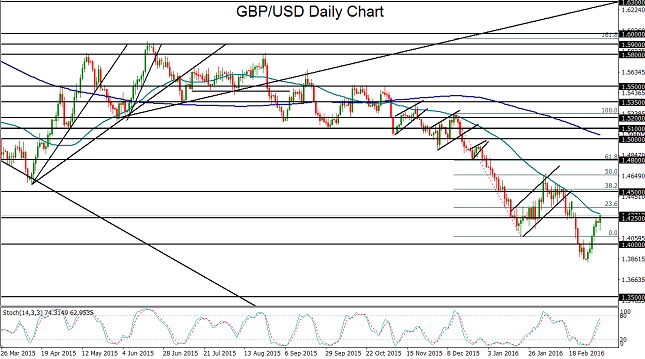