GBP/AUD set for a big rally?

So far this month, commodity currencies including the Australian and Canadian dollars had performed rather well. However it looks like that good run of form has come to an end for these currencies thanks to struggling metal and oil prices. With RBNZ due to make its policy decision later on tonight, the New Zealand dollar could also come under pressure in the event the central bank delivers a dovish policy statement.  Metal prices are undermined in part because of a stronger US dollar, thanks to a hawkish Federal Reserve. With the Bank of England also turning hawkish, the AUD could fall against both the USD and GBP.

The GBP/AUD rallied sharply earlier today in response to comments from the Bank of England’s chief economist. Andy Haldane said that “a partial withdrawal of the additional policy insurance the MPC put in place last year would be prudent relatively soon.” This is another clear signal that the BoE is turning hawkish.

So, with the AUD falling and GBP stabilising, the GBP/AUD could be about to stage a sharp rally in the coming days. In fact, this pair has already broken above the high of yesterday’s range (when it had formed a bearish-looking candle) and resistance at 1.6780. If the break can sustain itself then we may see price making higher highs and higher lows in the coming days. The bulls will like the fact that it has found support from its 200-day moving average. The false breakout beneath the prior low at 1.6690 is likewise bullish as it shows the sellers may be trapped. It is early days but price action is looking positive for the bulls. However if we see a new low below this week’s range then this would invalidate the bullish idea. 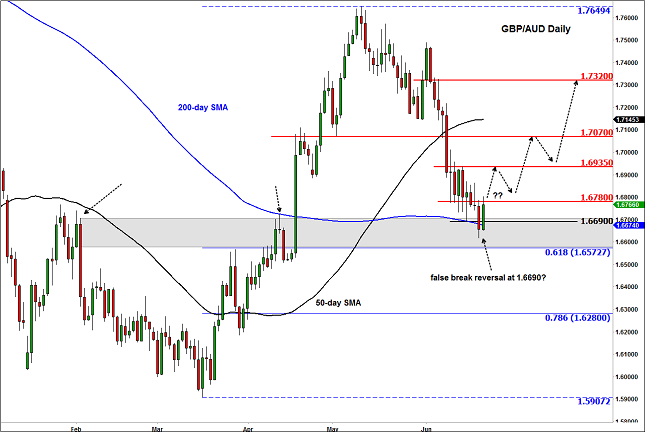