The key themes in the FX markets over the past few days have been (1) dollar strength and (2) yen weakness.

The key themes in the FX markets over the past few days have been (1) dollar strength and (2) yen weakness. Unambiguously, this has helped to cause a breakout in the USD/JPY pair above a long-term bearish trend line and resistance in the 111.00 area. Other yen pairs have also shown relative strength and we have covered one of those already this week (see “CAD/JPY could stage breakout on hawkish BoC” for more). Today it was the GBP/JPY’s turn, which broke out above its own resistance at 148.00.

The GBP/JPY’s breakout means we now have a higher high in place and the higher low which was created in late June has thus been confirmed. This means that the path of least resistance is now to the upside. Thus any dips back to broken resistances, in particular at 148.00, could be supported.

But at the time of writing, the Guppy was testing another resistance at 148.80, a level which was formerly support. While we wouldn’t be surprised if rates were to ease back a little here – after all, the Guppy has been going up aggressively of late and a bit of profit-taking wouldn’t hurt anyone – we would equally not be surprised if it continues to push higher given the strength of the current trend.

In any case, given the above bullish developments, we think that the GBP/JPY would head towards 150.00 in the coming days. This psychologically-important handle converges with a bearish trend line, so it is a more significant resistance to watch. We would drop our bullish bias in the event price creates a bearish pattern on the daily time frame and/or if there is a breakdown in market structure. 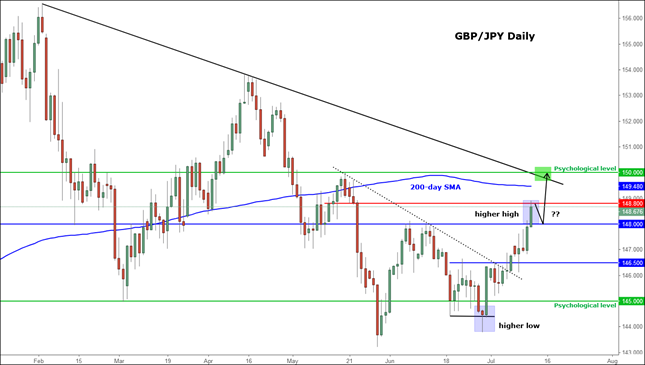