Since the start of March, when it found strong support from the psychologically-important level of 145.00, the GBP/JPY has been trying to recoup the losses it had occurred over the month of February.

Since the start of March, when it found strong support from the psychologically-important level of 145.00, the GBP/JPY has been trying to recoup the losses it had occurred over the month of February. So far, it has managed to make back more than half of those losses. But given the escalation in the war of words between the US and Russia over the situation in Syria, this risk-sensitive currency pair could come under pressure along with equities. However, if the situation were to calm down then we may see the resumption of the long-term uptrend.

In any case, the GBP/JPY has now reached a critical juncture at 152.00/152.15 area. This was the last support prior to the breakdown back in February. At the start of that month, the GBP/JPY had created a false break reversal pattern around 156.50. If that reversal pattern marked the end of the uptrend, then this deep retracement back into the old support level may be an ideal location for the sellers to step back in. In addition to this 152.00/15 level being an old support and resistance zone, it also marks the 2018’s opening price level and the 61.8% Fibonacci retracement against this year’s high.

Given the convergence of so many technical factors around the 152.00/152.15 area, today’s pullback should surprise no one. After all, a degree of profit-taking from the longs should have been expected here. But if this turns out to be more than just profit-taking and the sellers emerge here, and we have some sort of confirmation, then we could potentially see a sharp sell-off in the coming days. The alternative scenario would be if the sellers fail to show up here, in which case a run towards this year’s earlier high would then become likely. 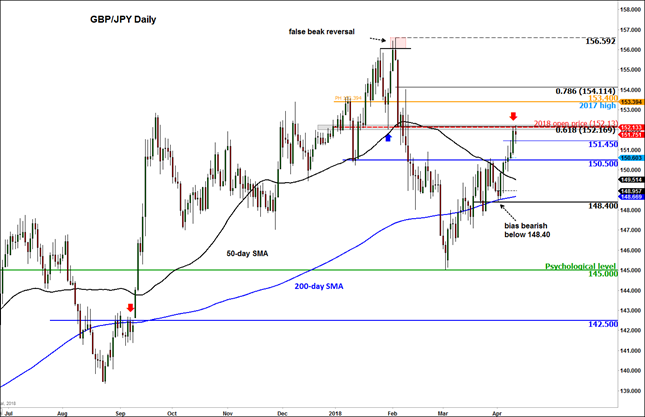