The latest UK inflation data has been released this morning. To the delight of Bank of England Governor Mark Carney and his dovish Monetary Policy Committee colleagues, the headline Consumer Price Index came in below expectations at 2.6% year-on-year for June compared to 2.9% expected and last. The Office for National Statistics (ONS) said a fall in motor fuel prices and in recreational and cultural goods offset rises in furniture and furnishings prices. The pound was quick to react as it dropped nearly 100 pips from its highs against the dollar to trade around a key support level circa 1.3025 at the time of this writing, where we were anticipating a rebound.

The June CPI miss was the first time in four months that inflation has fallen below analysts’ expectations. Other measures of inflation were mostly weaker too, with core CPI dipping to 2.4% from 2.6% while RPI slipped to 3.5% form 3.7% previously. However, it is worth remembering that this is just one month’s worth of data, and given that oil prices have bounced back again in recent weeks, the fall in CPI could turn out to be temporary.  So I don’t think the June CPI miss was a game changer as we need more evidence to suggest prices will fall.

The June miss aside, the Bank of England has been extremely tolerant to the recent sharp rises in the general level of prices, arguing temporary factors were to blame. The fact that the growth in wages has not kept up with the pace of inflation has been their main concern. So to counteract the potential impact of Brexit on consumer confidence and domestic growth, the BoE has – until now – decided to keep its monetary policy extremely loose. Nevertheless the generally higher levels of inflation has caused a split in the BoE's Monetary Policy Committee. After last week’s stronger jobs and wages data, the market has been speculating that the dovish MPC members might turn hawkish if inflation were to rise further. So the pound has been rising. If next month’s inflation data surprise to the upside then calls for a rate rise will increase again.

Despite today’s sell-off, the price action on the GBP/USD looks bullish thanks mainly to ongoing weakness in US dollar. The cable took its sweet time but last week finally cleared a major hurdle when it closed above the 1.3000-1.3050 resistance area where it had struggled in the past. Now above this area, the path of least resistance is to the upside and will remain that way until such a time we see a distinct reversal pattern unfold. At the time of this writing, the cable was testing 1.3025, which was the last resistance prior to last week's breakout. Once resistance, this level could turn into support. If it does and we hold above it then I wouldn’t rule out the possibility of further gains in this week. Some of our bullish objectives are shown on the chart, which include 1.3240 and 1.3445. We will drop out bullish view on a potential closing break back below the 1.30 level or if there is a more significant reversal pattern formed at higher levels first. 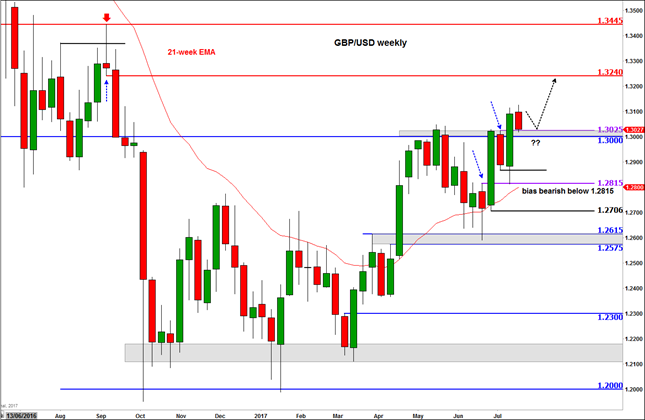