There are lots of major talking points for investors to consider this week. Chief among them will be the bond the markets, which sold off last week, causing yields to rise sharply. Investors will be wondering if government bonds will fall further out of favour this week and what this might mean for the equity and currency markets. Judging by what happened last week, any further weakness in bond prices could see the equity markets take another tumble. With major central banks recently dropping their dovish stances, investors are wondering whether some of these banks are actually falling behind the curve and need to accelerate the pace of normalising their monetary policies. The European Central Bank acknowledged the strength of the Eurozone economy at its most recent policy meeting and refused to talk down the euro, indicating that it is ready to tighten its belt if inflation were to accelerate. In the US, the Federal Reserve is now almost certain to raise rates in March, but the key question is how many more rate increases will follow that: two or three more?

Friday’s stronger jobs data and news that US average earnings rose at their fastest pace since 2009, certainly points to three more hikes after March if we assume that higher wages point to higher levels of inflation. But will this be enough to help support the dollar? The greenback rose sharply across the board on Friday, and was trying to extend those gains at the time of this writing on Monday. It was doing a good job against the pound in particular. The latter took a pounding ahead of the Bank of England’s policy decision later this week on news UK services PMI came in weaker than expected for the month of January. At 53.0 the PMI was more than a whole point below both expectations and the December reading of 54.2.

Sterling had enjoyed a good run of form recently on optimism over favourable Brexit conditions as the UK and EU try to come up with a deal on trade that benefits both economic regions. The growing optimism has seen investors sharply expand their bullish bets on the currency. According to the CFTC, net long positions on the pound rose to their highest levels since 2014. Whether or not sterling’s rise was due to a soft dollar or confidence about the UK economy is questionable, but judging by the rising EUR/GBP cross, I can’t help but think the GBP/USD has been supported mainly because of the weakness in the dollar than strength in the pound. But what matter is the fact that net long positions on the pound have risen sharply and this means that the correction potential is now high. Not only is the dollar on the verge of a potential comeback, but there is the possibility that the Bank of England on Thursday might sound a lot less upbeat about the economy than the market currently expects. Investors will also be wondering whether optimism over a soft Brexit is justified given that no deal has been reached yet and there is question marks about Theresa May’s position as UK PM. But as far as the BoE is concerned, well they might acknowledge the fact that consumer confidence is on the rise and that record numbers of people are in work. That potential acknowledgement may support the pound but perhaps only briefly, as the markets have already seen the data.

In addition to the above fundamental considerations, one can’t ignore the fact that the GBP/USD has entered deep into levels that were hit just before the Brexit vote in June 2016. The cable sold off sharply in the immediate reaction to the Brexit vote. If that sell-off was justified then, why can’t the cable go down from here again? Clearly a lot of people were wrong-footed and missed the big drop. Now that they have the opportunity to sell the cable at those levels again, will they step in? If we get a daily close below the key 1.40 level then this could be the trigger for the shorts to step back in. Resistance meanwhile comes in at 1.4150-65 area – any move above this region would probably invalidate any bearish signals that might have been generated by recent price action. 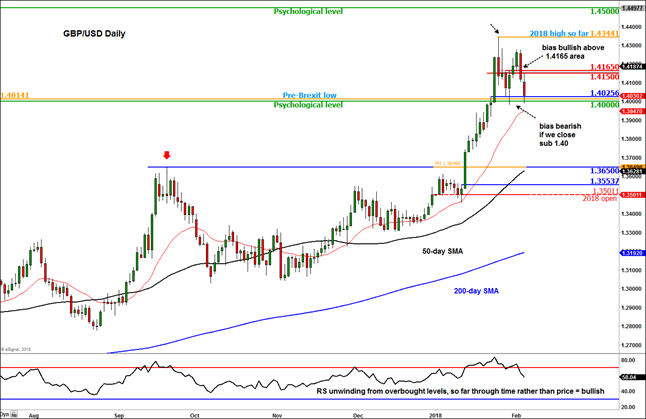