Well, no one had expected the Federal Reserve to raise rates just days before the presidential election and so it proved that way. The case for a December hike has “continued to strengthen,” but the FOMC preferred to wait for “some further” evidence that inflation is progressing towards its objective. So, December it will be, then. Unless, incoming economic data from now on turns really bad, starting with Friday’s jobs report. Either that or if there is a shock win for Donald Trump. As far as the dollar is concerned, we could see the return of the buyers now after the currency was sold heavily in the last few days. The sellers may also decide to take profit ahead of the US nonfarm payrolls report on Friday.

Tomorrow, it is the Bank of England’s turn to make a decision on its policy. The BoE is likewise expected to keep interest rates and QE unchanged. The focus will be on the updated inflation and growth forecasts in the Inflation Report. It is likely that because of the impact of Brexit the Bank will lower its growth projections, and due to the falling pound revise upwards its inflation forecasts.

So far, the rising import costs due to a weaker currency have not been passed onto the consumer in a meaningful way.  But there is so much pressure factories and wholesalers can absorb, especially once their existing inventories finish. So, there is a risk we will see inflation overshoot expectations. The Bank of England will then be in a very awkward situation because if it tries to stabilise prices by means of tightening monetary policy, it will risk choking off growth, while keeping its policy extremely accommodative will probably overcook inflation and undermine the pound.

Therefore I do think that there will be further volatility for the pound in the coming months, though not necessarily just in the downward direction. Going into the BoE’ Super Thursday and Friday’s US jobs report, I am expecting the GBP/USD to trade within its exiting ranges between 1.20 and 1.25.

In range bound conditions, the momentum indicator RSI reaching extreme levels combined with price making false breaks above or below key levels tend to be a strategy that works well for traders. There has been two distinct swing failure patterns on the Cable recently: one at 1.2088 support and the other at 1.2230 resistance, today. If short-term support at 1.2275 now gives way then I would expect the GBP/USD to drift back lower towards the base of its consolidation pattern. 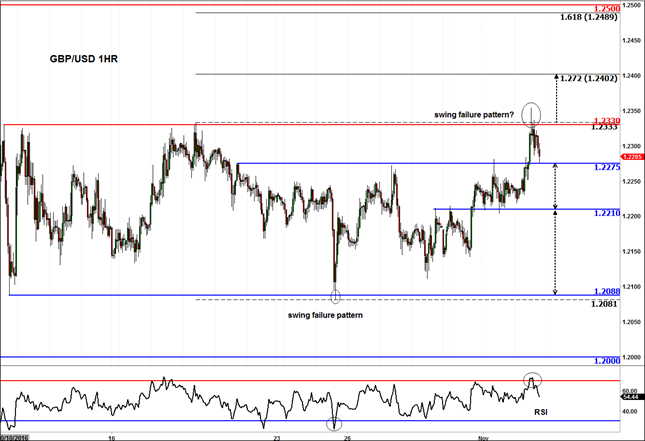