Pound could further extend declines ahead of BoE rate decision

The pound should remain under the spotlight not just today but throughout the week amid ongoing uncertainty about the political landscape in the UK after the Conservative Party lost its majority, and ahead of key UK economic data and the Bank of England meeting this week. It is worth pointing out that Theresa May still hasn’t secured a formal agreement with the DUP. She need to pass a Queen’s Speech in Parliament next week, which is necessary to give her the right to rule. Jeremy Corbyn, leader of the Labour party, has confirmed that they are preparing to put forward their own Queen’s Speech and urge other parties to support it to form a minority government.

Given the raised political uncertainty in the UK, the Bank of England Governor Mark Carney is highly likely to play it safe and would want to avoid attracting any unneeded attention at this crucial stage in UK politics. For the same reason, the upcoming UK macroeconomic pointers this week may not cause major moves in the pound as might have been the case in normal circumstances, with investors' focus firmly fixated on politics rather than economics at the moment.

Fed unlikely to be dollar positive, but greenback could find support from other factors

In addition to the Bank of England, we will also have rate decisions in the last two days of the week from the Swiss National Bank (Thursday) and the Bank of Japan (Friday). But like the BoE, SNB and BOJ, these central banks are unlucky to announce any major policy changes. However, there will be one major central bank which is almost certain that it will: the US Federal Reserve, on Wednesday.

Indeed, the Fed's decision is the most highly anticipated. But despite a much weaker payrolls report and noticeable deterioration in other macro pointers, the markets are almost certain of a rate hike this time. In fact, according to the CME Group’s FedWatch Tool, the probability of another 25 basis point rate rise is around 99 per cent, which is as close to certainty as you will ever get in the markets. This therefore means that the potential for a big dollar move is unlikely as the potential rate rise must be priced in. Indeed due to this remarkably high market-viewed probability, the key risk would be if the Fed refused to hike rates on Wednesday. But it probably won't want to damage its reputation having talked up the prospects so much. Instead, it will probably accompany the rate rise with a dovish policy statement, in which it may suggest that future rate rises would be few and far between.

So, whichever way you look at it, it is difficult to say how the Fed's actions this week would help to underpin the dollar. The US currency may however find support from other sources, not least from potential safe haven flows in the event of a stock market correction. Other central banks that are also meeting this week may come across more dovish than the Fed, and that in turn could indirectly boost the dollar. The Dollar Index may also get a boost from further declines in the GBP/USD pair, should the pound extend its post-election declines as we suspect that it might. In addition, there are key economic data to consider, including US CPI. Some of the key highlights for next week are as follows:

GBP/USD’s path of least resistance to the downside

From a technical perspective, the GBP/USD’s path of least resistance is to the downside following the breakdown of key support at 1.2755-75 area, which has turned into resistance today. For as long as this area holds as resistance, we remain bearish until such a time we see a distinct reversal pattern again. The next potential support area is around 1.2570-95 range. This is where old resistance meets the 50% retracement of the last upswing and the 200-day moving average. Given how bearish things look at the moment, at best we may get a bounce from here. 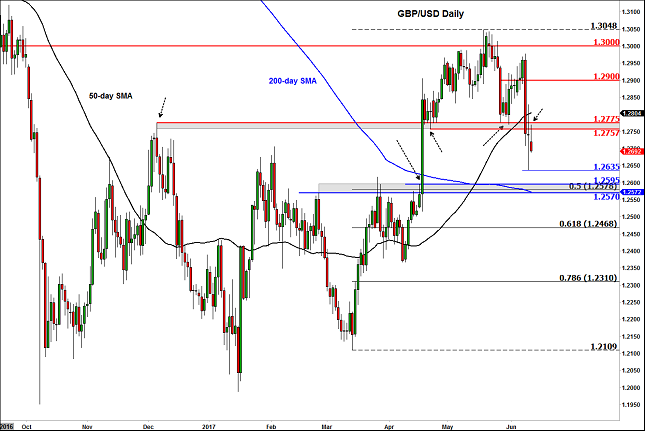