After a 300-pip rally on Tuesday, the GBP/USD is unsurprisingly taking a breather today.

After a 300-pip rally on Tuesday, the GBP/USD is unsurprisingly taking a breather today. Tuesday’s upsurge came on the back of news Theresa May called for a snap general election. Evidently, investors are hopeful that the UK Prime Minister will have a stronger mandate to secure the UK’s EU exit from the EU as she will be able to push back hard deadlines for a trade deal until the next election in 2022, assuming she wins this one. But that is the hope, in reality things might turn out differently, as US investors are starting to find out with regards to Donald Trump. Clearly, Brexit-related uncertainty will remain in place for a while yet. After all, we still don’t know, for example, what type of a trade deal will the UK get from the EU. Thus, it can be argued that Tuesday’s upsurge in the pound may have been a bit of an overreaction. What’s more, given that financial speculators had held record net short positions in GBP previously, the move higher was undoubtedly fuelled in a big way by short-covering as the GBP/USD and other GBP crosses moved outside of their recent trading ranges. It is thus questionable whether these speculators will now willingly rather than forcefully change their GBP holdings in a significant way, as the currency does no longer appear as undervalued as it did a few months ago. But a pullback of some sort may make the GBP look attractive again.

Ultimately, however, the currency is still in a long-term downtrend against the USD, as the latter is supported by a hawkish central bank. Therefore, if we were to see the start of a more sustainable rally in the GBP/USD, there will need to be a significant change in interest rate expectations in the UK and/or the US. In other words, the Bank of England will need to become a lot more vocal about tightening its policy and/or the US Federal Reserve will have to drop its hawkish stance. That will only happen if incoming data, specially wages and inflation figures, from the two countries deviate in a meaningful way. But there is no sign of that at the moment. As a result, we may see speculators re-instate their bearish GBP positions in the coming weeks, which could undermine the cable. So, I am of the view that the pound will come under pressure again soon, but it may have a bit more to go on the upside before it does so.

From a technical perspective, the GBP/USD does look a little overbought in the short-term, with the RSI indictor moving north of 70 on Tuesday. This does not necessarily point to another collapse, but what we may see now is some chop and churn before the next leg higher. Indeed, the multi-month basing around the 1.20-1.27 area and the eventual breakout means the path of least resistance is now to the upside. But I do think that the cable may weaken in the short-term as it tests key resistance around 1.2880-1.2920. This was the last support area at the end of last summer prior to the breakdown that eventually led to a flash crash sell-off. Once support, now it is acting as a bit of resistance. Thus with price at resistance and at short-term overbought levels, a drop to old resistance levels would not come as a surprise to me – specifically, towards 1.2705-1.2770, which was the top of the prior resistance range. Ideally for the bulls, the potential re-test of this area should lead to a sizeable bounce. But if the cable doesn’t bunce there then one can reasonably expect to see a retracement towards the last resistance level pre breakout at around 1.2595-1.2620 area, where we also have the 200-day moving average residing.

Alternatively, if the cable breaks above the abovementioned resistance area of 1.2880-1.2920 then this may pave the way for further technical momentum buying pressure towards and possibly beyond 1.30 handle, before we potentially see the next leg lower. 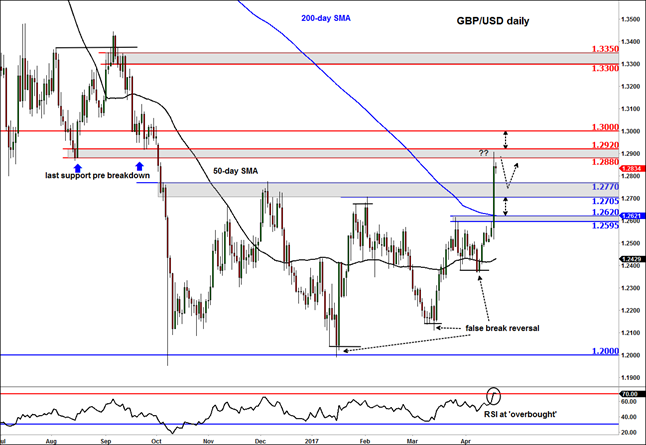