GBP/USD: UK’s hat-trick of PMI disappointment not a game changer

It is worth remembering that a reading above 50.0 still represents expansion and so all the three sectors did actually expand in June and as of yet there are no clear signs that business or indeed consumer sentiment has been severely damaged by Brexit-related political turmoil or the recent terrorist attacks. With economic data remaining generally positive, and inflation on the rise, the pound could extend its recent advance in the coming weeks as expectations over a rate hike increases.

Meanwhile US markets are set to reopen after 4th of July holidays. There aren't many economic pointers due for release this afternoon but things will pick up from tomorrow, culminating in the release of the key monthly employment report on Friday. There is however one important piece of news due for release today: FOMC's June meeting minutes. The minutes are unlikely to cause any major reaction, however, as several Fed speakers after that meeting have conveyed mostly hawkish remarks, reiterating what had been said in the June rate decision. So if the dollar is going to make a significant move it will be because of this week's upcoming data rather than today's release of FOMC minutes.

From a technical perspective, the GBP/USD still looks bullish to me despite this week’s dollar rebound. As one would have expected after a large range expansion last week, the cable has stalled around that key resistance and psychological hurdle at 1.30 again. However, it hasn’t broken any significant support levels yet. The last resistance prior to last week’s breakout was around 1.2815. If the cable drops to this level, I would expect to see a reaction and a possible resumption of the bullish trend. Alternatively, if the cable doesn’t hit this level and bounces then we would be waiting for an eventual break above 1.3000/3050 area. A clean break here could pave the way for a move towards the next bullish objectives at 1.3240 and then 1.3450. However, if last week’s low at 1.2705 breaks first then all bets would be off – this would be a rather bearish outcome. 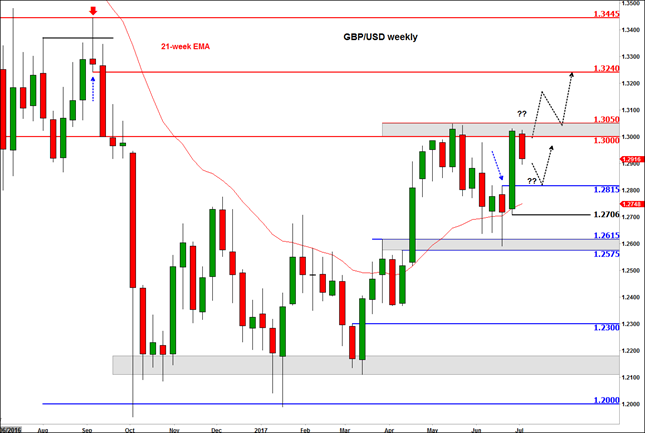