GBP/USD undermined by soft UK wages ahead of US CPI

This week’s key economic pointers from the UK have been somewhat disappointing and this has been reflected in the pound, which has weakened against most of its rivals. After a slightly weaker-than-expected UK CPI print on Tuesday, another gauge of inflation also came in weaker this morning. The ONS said that average hourly earnings, including bonuses, eased to 2.6% in the three months to December from 2.8% the previous month.

This week’s key economic pointers from the UK have been somewhat disappointing and this has been reflected in the pound, which has weakened against most of its rivals. After a slightly weaker-than-expected UK CPI print on Tuesday, another gauge of inflation also came in weaker this morning. The ONS said that average hourly earnings, including bonuses, eased to 2.6% in the three months to December from 2.8% the previous month. Analysts were looking for an unchanged figure. However the number of people in work rose to a record high in January, while the claimant count fell by a much larger-than-expected 42,400 applications. So, jobs are growing faster than wages it seems. But there tends to be a lag between employment and wages growth anyway, so hopefully wages will catch up soon. Once there is more clarity on the issue of Brexit and if UK economic data continues to remain strong then the Bank of England may have to tighten its belt sooner than it wants to, otherwise it may be forced to raise rates more rapidly in the future, which could risk disrupt financial markets and push the economy into recession. These words sound familiar? Well, that’s exactly what the US Federal Reserve Chair Janet Yellen said yesterday about US monetary policy. On that note, traders’ focus will turn to US CPI and, to a lesser degree, retail sales, Empire State manufacturing index and industrial production this afternoon. If we see any weakness in US macro numbers, then the dollar could fall back and this could support the GBP/USD. However if US numbers, especially CPI, comes in stronger then the GBP/USD could drop below 1.2400.

Form a technical perspective, the GBP/USD is well within its current consolidation range between around 1.20 and 1.27. At the current price of 1.2435, the cable resides in the upper half of its range and thus has the potential to fall further before it becomes ‘oversold’. But for now, it clings onto the key 1.2415 support and unless this level breaks down on a closing basis, the bias remains slightly tilted to the bullish rather than the bearish side of the argument. In fact, the cable may well have already bottomed out when it failed to crack that key psychological level of 1.20 in mid-January. Since then it has put in a series of higher highs and higher lows. But we do need the cable to break out of its wider range of 1.20-1.27 before the potential double bottom formation can be confirmed. At the moment, there are no signs of that happening with price threatening to break support at 1.2415. If this level gives way then we could see a retest of the 50% retracement level at 1.2345 where it had previously bounced from. But a more significant support level is further lower at 1.2260, which also marks the 61.8% Fibonacci retracement level. It should be noted that the potential double bottom formation would still remain valid even if the cable were to pull back this deep – only a break below 1.20 would render it void. Meanwhile on the upside, the first level of resistance on the daily time frame comes in at 1.2480, the low from Monday’s candle which was taken out on Tuesday. Above this level, the 1.2545-85 area would be the next resistance zone to watch. If and when the cable breaks above here, then the possibility of a move outside of the wider range would become likely and as such we could be talking about 1.30s next. 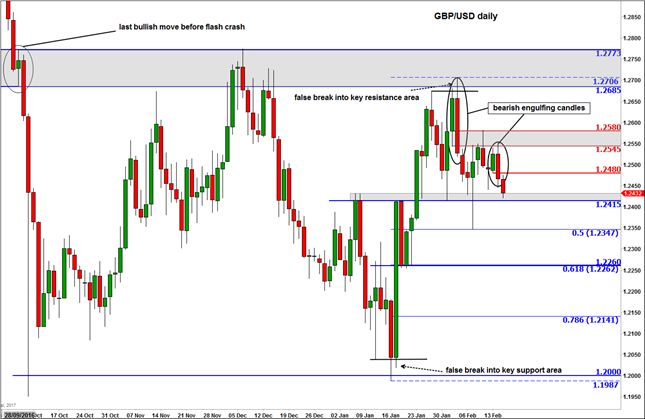