Choppy price action continues inside wide ranges ahead of the Jackson Hole Symposium and amid lack of any significant news. After falling sharply yesterday, stock markets have bounced back again, while safe haven gold has fallen slightly out of favour. In FX markets, short covering has boosted the pound while the safe haven yen has weakened a tad. Unfortunately the markets are likely to remain directionless for another session at least until we hear from the heads of key central banks, including the Federal Reserve Chairwoman Janet Yellen and European Central Bank President Mario Draghi on Friday. So until then it will be mostly noise and/or technically-driven volatility for the major currency pairs, gold and indices.

Today’s main ‘news’ was from the UK where the second quarter GDP was left unrevised by the ONS in its second estimate. Although this was an expected outcome, the breakdown of the data didn’t exactly match expectations. It looks like the softness of the pound and Brexit uncertainty is having undesired impact on household and business confidence. Consumer spending dropped to a two and a half year low of just 0.1% on a quarter-over-quarter basis, while business investment was flat. Thus a rise in government spending prevented GDP from being revised downwards from 0.3 per cent. Nonetheless the pound actually managed to catch a bid after falling sharply in recent days. Short covering from oversold levels lifted the GBP/USD from 1.2775 to a high so far of almost 1.2930. The EUR/GBP’s strong upward trend paused as the cross drifted lower to around 0.9200 while the GBP/JPY made back more than half of it sharp falls from the day before. The gains for the pound could very well be short-lived as sentiment is quite bearish at the moment thanks to a dovish Bank of England.

But as far as the cable is concerned, it was testing a key short-term resistance area between 1.2830 and 1.2850. This area was previously support so it could turn into resistance, potentially leading to another drop. However if this area fails to hold price down then we may see the short squeeze bounce continue until the next resistance area between 1.2940 and 1.2970, where the back of the broken trend line converges with 50-day moving average and prior support. Any move above 1.2970 would probably mark the end of the current downward trend. In terms of support, the first level to watch is at 1.2755/60 area, which the point of origin of the breakout that led to a rally to this year’s high. This level was never re-tested so it will be interesting to see what price does if it gets there. Below this level, the cable may make a move towards the 50% retracement level at 1.2625 which comes in just below the 200-day moving average at 1.2645. 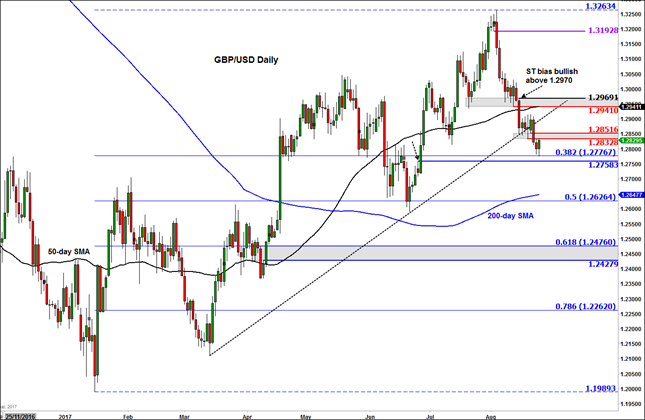