GBP/USD: Upcoming UK and US data key test for cable

The dollar has come under pressure again after Friday’s jobs data disappointed expectations, which raised some doubts over the prospects of another rate hike before the year is out. However, the according to the minutes of the September FOMC meeting, released on Wednesday, the Federal Reserve still expects to raise interest rates in December. What’s more, the Fed had already been expecting September jobs growth to suffer due to the weather-related damage. The minutes also revealed that some officials were concerned that weak inflation could be a longer-term issue, although their concerns were partially offset by the improving economic growth. Indeed, some even warned that hesitancy “in removing policy accommodation could result in an overshoot of the Committee's inflation objective in the medium term that would likely be costly to reverse.”

Forget NFP, it is all about CPI now

So, the FOMC minutes confirmed that the disappointment in the September non-farm payrolls data will probably not have any material impact on the Fed’s policy stance. But the upcoming inflation data could certainly influence their decision. Analysts seem to expect a positive surprise on Friday with headline CPI is expected to have risen last month by 0.6% month-over-month, which would takes the year-over-year rate to 2.3% from 1.9% previously. Core CPI is seen rising 0.2% with the year-over-year rate expected to climb to 1.8% from 1.7%. If these expectations are met, or bettered, then the dollar could make a dramatic return. That being said, the expectations seem a little optimistic, so there’s scope for some disappointment.

Meanwhile sterling has been undermined by ongoing political uncertainty in the UK, which has overshadowed an otherwise bullish outlook with the Bank of England looking increasingly likely to raise interest rates next month. Traders are also wary of potential disappointment in next week’s publication of key domestic inflation and jobs data and with US CPI also due for release this Friday, the cable isn’t going anywhere fast.

Once the upcoming data from both sides of the pond are published, the direction of the cable should become clearer. For now, the GBP/USD is somewhat directionless, although the medium term bullish outlook hasn’t materially changed despite the recent sell-off, as price hasn’t created a distinct lower low (yet). But with the cable unwilling to hold above 1.35, we are not as confident in our long term bullish outlook as we had been previously. In the short-term, the GBP/USD faces several hurdles which need to be taken out in order to brighten the longer term outlook. These shorter-term resistance levels include 1.3260/5 and 1.3350 and then the pivotal 1.3500 handle. Meanwhile short-term supports are seen around 1.3225, 1.3140 and that key 1.3000 handle. 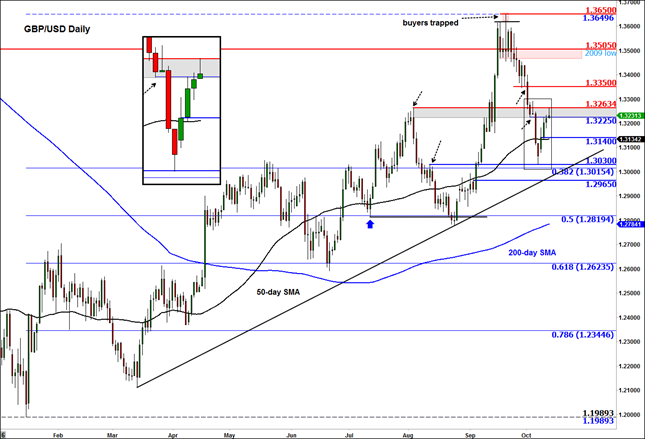